This is a list of soldiers with a connection to the town of Pearcedale. There may be some I have missed, if you know of any, then please let me know.

The soldiers listed below had their address on official papers as Pearcedale, sometimes Pearcedale, via Somerville and on occasions just Somerville. They may also have had Langwarrin listed as a birthplace, which when they were born was the name for Pearcedale. I have also included any soldiers whose family are mentioned in the book Pearcedale: Moments in history. You can read more about this book and Pearcedale here. If you want to borrow the book, click here

What follows is a list of soldiers, their connection to Pearcedale, their fate (i.e. when they Returned to Australia after active service or when they were Killed in Action) and their Service Number (SN) so you can look up their full service record on the National Archives website (www.naa.gov.au)

Barton, George Ormond (SN 965) George was  a 25 year old orchardist when he enlisted on August 17, 1914. His next of kin was his father, Joseph, of Pearcedale. George Returned to Australia on September 23, 1918. You can read more about the Barton family in Pearcedale: Moments in history. 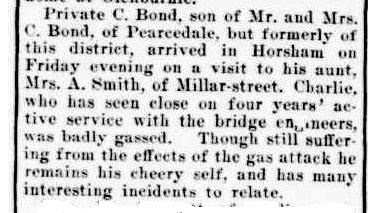 Clark, Alfred Hoswell (SN 13933) Alfred was born at Langwarrin and enlisted on May 4, 1915 aged 19. He was an apprentice to his father, his occupation being mechanic and motor driver. Alfred Returned to Australia on June 2, 1919.

Feltham, George (SN 3064)   George enlisted on February 2, 1917. He was born in Langwarrin, as Pearcedale was known at the time. He was a 26 year old boundary rider and his next of kin was his father, William, of Pearcedale. George Returned to Australia on September 25, 1919.

Grosvenor, James Edwin (SN 1044)    James was born in Langwarrin and enlisted on August 18, 1914. His next of kin was his sister of North Fitzroy, but he was living at Tallandoon (south of Tallangatta) at the time  He Returned to Australia on February 15, 1918.

Heazlewood, Walter Frederick  (SN 7161)  Surname also listed as Hazlewood. Walter enlisted October 27, 1916. He was a 32 year old farmer. Walter was medically discharged on January 4, 1918 and he died on December 12, 1922, suffering from Tuberculosis.

Jarvis, Clarence James  (SN 3853) Clarence was nearly  19 years old and an apprentice  carpenter when he enlisted on August 16, 1915. On August 7, 1916 he received a gun shot wound to the chest, whilst serving in France. He Returned to Australia on March 17, 1917 and was discharged on medical grounds in July.

Jarvis, Oswald Lewis   Listed on the Discovering Anzacs site as having enlisted at the age of 29, with a Pearcedale address, which doesn't tally with his birth date of 1895. He was a brother of Clarence, above, they were both born in Cudgewa, but I cannot find out anything else about Oswald's service.

Kennough, William Henry (SN 144)   Surname is also listed on some sources as Kannough. William was living in Oakleigh when he enlisted on September 9, 1914. He was awarded the Military Medal in August 1918 and Returned to Australia  October 18, 1918.

Larsen, Joseph (SN 3345) Joseph was 24 years old when he enlisted on July 6, 1915. He was born in Denmark and he had lived with James Ridley of Pearcedale for four years before his enlistment. He was Killed in Action in Belgium on September 20, 1917. They could find no trace of his parents in Denmark so his war medals were given to Mr Ridley in August 1920.

Lyons: There were four sons of Patrick and Louisa Lyons, of Pearcedale, who served in the Great War.

Patrick and Louisa (nee Henderson) had come to Pearcedale in 1910, they lived in East Road. Patrick died in June 1915, aged 52,  leaving Louisa a widow. They had eleven children. I wonder what happened to Louisa and I hope she found some happiness. You can read about the Lyons family in Pearcedale: Moments in history. 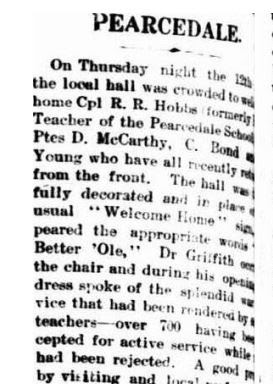 This article from the Mornington Standard of June 21 1919 reports on the welcome home to Rupert Hobbs, Charlie Bond, Robert Young and a D. McCarthy.
http://nla.gov.au/nla.news-article65852679


McCarthy, D   As you can see from the article above D.McCarthy had a connection to Pearcedale, I just can't work out who he is. I feel that it is either Daniel McCarthy (SN 16051) a telephone mechanic from Traralgon or Daniel Patrick McCarthy (SN 10447) a farmer whose next of kin on his enlistment paper was his brother, Edward, who was from Koo-Wee-Rup and later changed his address to Nar Nar Goon and on the embarkation roll it was his uncle, T. McCarthy of Nar Nar Goon. Daniel McCarthy was an orphan, I feel that he is the more likely candidate, but if you ave any information then please let me know.

Monro: George and Amy (nee Ostler) Monro had six sons of which three  served in the Great War. George was a market gardener and flower grower and  had arrived in Pearcedale  in 1900. You can read more about George and Amy and family in a short piece written by their grandson, George Monro in  Pearcedale: Moments in history.

Monro, Allan Clarence  (SN 3208)   Allan  had first enlisted as a 19 year old on April 6, 1915 but was discharged as being medically unfit, due to bronchitis, on June 24 the same year. Then he enlisted again on March 25, 1916 and served in the Home Services until July 11 when he was discharged again. Allan enlisted for the third time on November 26, 1916, he went overseas in the December but Returned to Australia in October and was discharged from the Army as medically unfit on December 14, 1917. There are two interesting letters in his file -  a 1942 letter from the Lighthouse & Navigational Services asking for  a copy of his war record as Allan had been appointed the permanent lighthouse keeper at Cape Schanck and one written by Allan in 1947 asking for a copy of his discharge papers as they were destroyed when his house was burnt down in the Black Friday bush fires on 1939.

Nicholson, Donald (SN 986) Donald was 22 when he enlisted on September 18, 1914. Donald was Wounded in Action at Gallipoli, gun shot wound to left forearm, and  he Returned to Australia on July 17, 1915 and was officially discharged in November 1916.

Nicholson, Martin Terris  (SN 7285) Martin enlisted on December 4, 1916 aged 20. He Returned to Australia on August 19, 1919.  Both Donald and Martin were born in St Arnaud, Martin's mother was listed as Mrs Annie Perry and Donald's as Mrs Nicholson - were they brothers and their mother had remarried?

Pearce, William Henry (SN 2561)  William enlisted at the age of 21 on January 20, 1915. William was wounded whilst fighting in France on July 3, 1917 and died the next day. The town of Pearcedale was named for William's parents - Nathaniel and Mary Grace Pearce -  in 1905. Read about the family, here. 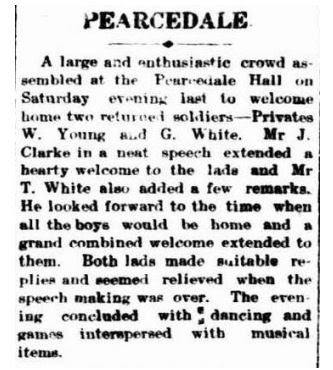 White, George Edward (SN 69382)  George  enlisted at the age of 18 on May 20 1918. He left for service overseas on November 2 1918 and it doesn't say when he returned. His parents, Thomas and Grace had an orchard, Plumvale. You can read more about the White  family in Pearcedale: Moments in history. George's enlistment papers list his address as Somerville.

White, William (SN 5436)  William was a 27 year old gardener and he enlisted on March 18, 1916. He and his wife, Sarah, lived at Bayview, Pearcedale. William was born in England and was granted leave from the Army between March and June 1919 to work on Mr A. White's farm, presumably a relative. He Returned to Australia on August 1, 1919.

Wisken, William (SN 985) William enlisted on July 3, 1915. He was 21 and his occupation was nursery hand. He Returned to Australia on September 9, 1916 for discharge due to 'adolescent insanity' he had previously been described as 'a simple childish boy'. I wonder what happened to him?  William was the son of Henry and Rose Wisken who had arrived in Pearcedale on Boxing Day 1909 with their nine children of which William was the eldest. His brother George was President of the Pearcedale Cricket Club for 50 years and is the namesake of the George Wisken  Memorial Oval (Source: Ian Wisken - from the book Pearcedale: Moments in history)

Young, Robert Charles (SN 3305) Robert enlisted on July 20, 1915 aged 23. He was a labourer and was a member of the Pearcedale Rifle Club. Robert was born at Mornington Junction, the original name for the town of Baxter.   Robert Returned to Australia on April 13, 1919.

Young, William Hay (SN 1582)  William enlisted on April 17, 1915 aged 28, he was an orchardist. William was Wounded in Action on two occasions and also gassed and consequently spent a lot of time in hospital when he was serving overseas. He Returned to Australia on January 14, 1919.

Email ThisBlogThis!Share to TwitterShare to FacebookShare to Pinterest
Labels: Pearcedale