The Boer War was fought between British forces against the Boers, or Dutch-Afrikaner settlers in South Africa from 1899 until 1902. The War was also called the South African War and referred to as the Second Boer War. The First Boer War, fought between the Boers and the British, took place in 1880-1881, but no Australian troops were officially involved.

This post looks at some of the local men who served in the Boer War. This is a work in progress, I am sure there are many others, so if I have missed any please let  me know. The South African War / Boer War Nominal Rolls can be found here, on the Australian War Memorial website. The Nominal Rolls contain very basic information - name, rank, service number and sometime there is a line about some aspect of their service. The Australians in the Boer War website is also a good source of information, see here.

Bain, Donald Stewart  Donald, born in 1880, was the eleventh and last child of Robert and Susan (nee Stewart) Bain of the Berwick Inn (Border Hotel), established by Robert in Berwick in 1857. He enlisted in either Robert's Light Horse or Kitchener's Fighting Scouts or the  Kaffarian Rifles according to various reports (1).   When Donald returned he became a Stock & Station Agent,  and then he enlisted in the A.I.F in August 1914. Donald was discharged in medical grounds - neurasthenia and shell shock - two years later. You can read his First World War  Personnel Dossier, here. Donald died in 1937, aged 56. 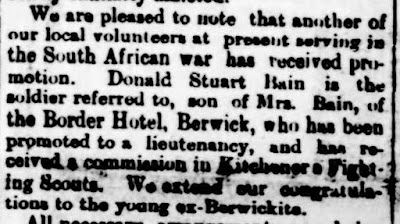 Chambers, Michael James.  Enlisted in the 5th Victorian Mounted Rifles. Michael had also enlisted in the First World War on  March 6 1918 at the age of 38. He lived in Modella and had a wife, Labela and three children. Their son, Ronald, was the Shire of Berwick Engineer from 1948 until 1973, and then the Shire of Pakenham Engineer until 1977. The family are the source of the name Chambers Road, Modella. The R.J. Chambers Reserve in Pakenham Upper is named for Ronald.  Michael died in 1961 aged 85. See his Boer War Nominal Roll, here and his First World War file, here. 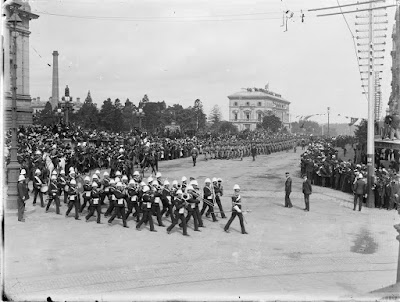 Davies, Arnold Mercer. Enlisted in the Victorian [Citizen] Bushmen, see his Nominal Roll entry, here. Arnold was the son of Sir Matthew Davies - the first Speaker of the Victorian Parliament, who was born in Australia. Arnold had a letter about his experience of fighting in South Africa, published in The Argus in September 1900. You can read the letter and find out more information about his family, here.  I am not actually sure how he is connected to this region, however Arnold and Alfred Robinson were welcomed home at a function at the Narre Warren North Mechanics' Institute on Friday, February 22, 1901. I presume he was farming in the area. There was a report of the welcome home in the local paper and it starts thus  - It is hardly possible that at any country town within the colony such a handsome welcome home was extended to our returned soldiers as that which took place at the Mechanics Institute, Narre Warren North, Friday night last.

The assemblage comprised visitors from Dandenong, Berwick and the surrounding district well as a strong force of the local residents and numbered about two hundred and fifty, possibly a record attendance at any similar gathering at Narre Warren. The idea of inviting ladies was a great success, nearly half the audience being composed of members of the fair sex. Arnold and Alfred were each   presented with a handsome gold medal, suitably inscribed to the effect that they were given by residents as a token of esteem.  You can read a full report of the event, here, in the South Bourke & Mornington Journal of  February 27, 1901.

After his return Arnold was farming for a time at Doodakine in Western Australia according to the 1909 Electoral Rolls (2).  Doodakine is 230 kms east of Perth. He returned to Victoria and enlisted in the A.I.F in November 1914 at the age  of 38. I can't tell you what he did during the War as he also enlisted in the Second World War and the personnel files have been combined and are not yet digitised. The WW2 Nominal Roll entry states he was born in 1887 - he was actually born 1876. It will be interesting to read the personnel file once it is digitised.

Elms, John Turner.  John was the son of the late Dr Elms of Berwick who had served the Berwick community from around 1890 until his death in 1893, at the age of 54. Early Days of  Berwick says that Dr Elms also treated cases at Brandy Creek [Warragul]  thirty five miles away, being their nearest Doctor.  John served with the 1st Victorian Mounted Rifles, see his Nominal Roll entry, here. When John returned he managed various farms in the Western District, including Terang where he died in 1945, aged 69.

Gamble, William. Served with the 1st Victorian Mounted Rifles. After the War, William became the Principal of the Dookie Agricultural College. He and his wife Barbara moved to Berwick in 1922 and farmed at Burnbank, in partnership with Edwin Flack, Australia's first Olympian. Barbara, was the first President of the Berwick Country Women's Association and died in 1944 at the age of 66 (3). William died in 1960 aged 91. They are both buried at Berwick Cemetery. See William's Nominal Roll entry, here.

Gardiner, John James. Served with the 2nd Tasmanian Imperial Bushmen and was Mentioned in Commander-in-Chief's Despatches on April 2, 1901. John also enlisted in the First World War, you can read about this service, here. John was a Civil Engineer and was employed as a Shire Engineer in councils in New South Wales and Queensland, before he retired in 1935 and returned to live in Berwick. He was also a councillor for the Shire of Berwick. See John's Nominal Roll entry, here.

The Herald 'World of Sport' column of July 20, 1900 published  a letter from Charles Searle (see below) about life in South Africa and he mentioned John Gardiner -
Though they have to take their share of shot and shell the boys in South Africa manage to find time for football. A Berwick boy with the Tasmanian contingent has sent an account of a match to Mr. Searle of Berwick, and Mr Searle has very kindly forwarded It to me. It is as follows:— "A most interesting and exciting combat took place to-day between the Tasmanian and South Australian Bushmen Contingents on the eve of the departure of the Tassies for Bulawayo, resulting in a win for the Tassies by 6 points, Stanworth (capt.) and Sergeant Gardner of Berwick, both Victorians, being conspicuous for Tasmania, and Wilson, Roberts and Kerr for South Australia."
Hillman, Alfred Ernest  From Pakenham. Enlisted in the 2nd Victorian Mounted Rifles. You can read about him, here.

Leggett, Sid  Sid joined Robert's Light Horse in South Africa with Donald Bain. The boys were both from Berwick, that is all I know about him.  A Miss Jean Leggett attended the Loyal Berwick Lodge Annual ball in August 1905 (4)  and she may be his sister, but I am unsure. 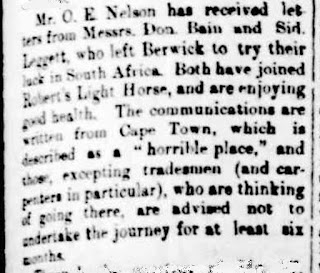 
Morris, John Crisop.  Enlisted in the 1st Queensland Mounted Infantry (see Nominal Roll here) where he had the role of Bugler, and the 7th Battalion, Australian Commonwealth Horse (see here). He reached the rank of Squadron Sergeant Major in the 7th Battalion. John Morris also enlisted in the First World War on September 24, 1914 at the age of 38. He had the unusual occupation of actor and he was born in Townsville, enlisted in Melbourne and his mother, who his next of kin, was also from Townsville. He Returned to Australia December 16, 1917 suffering from 'cardiac arythmia'. You can read his First World War  Personnel Dossier, here. Morris is listed in the Electoral Rolls at Pakenham Upper in 1919, his occupation is orchardist. In 1922 he was granted a Soldier Settlement farm at Yarram, read about this here, on the Battle to Farm website. 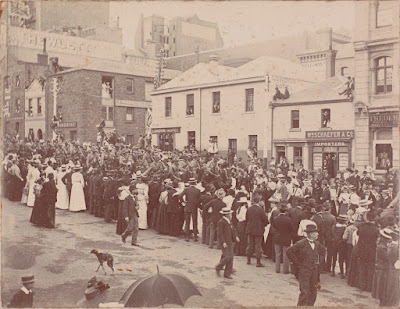 Ogilvy, Arthur James.  Served with the 2nd Victorian Mounted Rifles, and the 2nd Scottish Horse.  Arthur was the son of James W. Ogilvy, of Buchanan Road, in Berwick. Early Days of Berwick said that James was the son of one of Melbourne's earliest solicitors, was one of he first pupils at Scotch College and had witnessed the departure of the Burke & Wills Expedition in 1860. Interesting connections to Melbourne's early history. Arthur was 'welcomed home' with Jack Elms at the smoke night held at the Rechabite Hall in Berwick. He also served in the First World War in the 2nd Light Horse, where he hald the rank of Captain. Captain Ogilvy was Mentioned in Despatches, and Returned to Australia May 1919. You can read his Boer War Nominal Roll entry, here and his First World War Personnel Dossier, here.

Osborne, Henry Houston. Served with the 5th Victorian Mounted Rifles and was a Lieutenant.  Henry is listed in the Electoral Roll at Clyde from 1912 to 1926. His occupation was farm manager. Henry died 1944 aged 84 and was the son of James and Esther (nee Houston) Osborne. Henry married Leila Caroline Kennedy in 1895 in a 'fashionable wedding' at All Saints Church in St Kilda in January 1895, you can read about it here. His Nominal Roll entry is here.
Pritchard, George. Served with the Victorian Imperial Bushmen. The notation in the Nominal Roll syas that Returned Victoria 5/1/01; reported fit; Returned to South Africa and rejoined 4/4/01. His Nominal roll entry is here. George also served in World War One, he was living in Yannathan when he enlisted and you can read his World War One Personnel Dossier, here.

Robinson, Alfred James.  Served with the 1st Victorian Mounted Infantry Company. Alfred, born 1877,  was the son of George Washington and Eliza Robinson  of Hillsley, Narre Warren North.  George was the Shire of Berwick Engineer and Shire Secretary for Ferntree Gully (5).  Alfred's mother, Eliza was the daughter of Thomas and Eliza Walton, of Holly Green, Narre Warren. This was the property acquired by Sidney Webb and is now the site of Fountain Gate Shopping Centre. Alfred married Jessie Lyon of Harkaway on February 22, 1910. Alfred's Nominal Roll entry is here.

Searle, Charles John. Served in the Victorian Imperial Bushmen. Charles was the son of  Henry Searle, of Berwick. Henry was a Blacksmith and operated from the corner of High Street and Wheeler Street from around 1860. Charles Searle had two of his letters from South Africa published in the South Bourke & Mornington Journal, I have reproduced them here. According to Early days of Berwick, Charles remained to reside in South Africa at the conclusion of hostilities. Read his Nominal Roll entry, here.


Trove list - I have created a list of articles on Trove  on the Boer War / South African War with a connection to the Casey Cardinia region or Dandenong, access it here.