The Gardiner brothers of Berwick and their nephews, the Sibert boys

Four brothers from the Gardiner family of Berwick served in the Great War. They all returned, however, two grandsons, who also served in the War did not return. The Gardiner boys were the sons of  James and Mary (nee Church) Gardiner, who had married in 1870. They lived in Brisbane Street.  Mary was the daughter of Isaac Church, she died in 1920, aged  71, and according to her obituary she had been a resident of Berwick for 53 years, hence since 1867. James died in 1923 at the age of 77, and his obituary said that he had been a resident of Berwick for 60 years, thus since 1863. 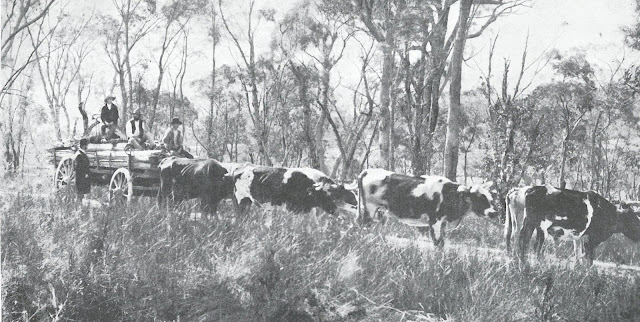 Brisbane Street, Berwick, c. 1880
This is a great photo - seated on the wagon is John Gardiner, who served in the Boer War and the Great War; his father James Gardiner;  E. Sibert, who I assume is Edward Sibert, the husband of Amelia Gardiner. Standing is G. Church, who is probably Mary Gardiner's brother.
Source: Early Days of Berwick

The couple had the following children, all born in Berwick - 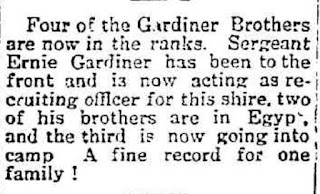 Here are the details of war service of the Gardiner Boys. I have included their Service number (SN), so you can look up their full record on the National Archives, www.naa.gov.au

Gardiner, John James (SN 1651) John enlisted at the age of 44 on May 11, 1916.  His occupation was Civil Engineer and Surveyor and his next of kin was his wife, Mary Ann, of Berwick. Mary is called Matilda and Moya in some sources. John Returned to Australia August 24, 1918. John had also served in the Boer War, he was part  of the 2nd Tasmanian Imperial Bushmen and was Mentioned in Commander-in-Chief's Despatches on April 2, 1901. John  was a Shire Engineer in New South Wales and Queensland and after his retirement in 1935 he returned to Berwick and was elected as a Shire of Berwick Councillor. You can read his obituary in the Dandenong Journal of January 9, 1946, here.

Gardiner, George Peter (SN 4401)  George enlisted on January 5, 1916. He was 37 years old, his occupation was Slaughterman and his address was Cockatoo Creek, a previous name for Cockatoo. George's next of kin was his father, James, and he Returned to Australia April 10, 1919.

Gardiner, Ernest Edward (SN 48) Ernest enlisted on August 22, 1914 at the age of 27. He was a farmer and he enlisted in New South Wales. He was reported as being 'dangerously ill'  and invalided to Australia July 31, 1915 and medically discharged June 6, 1916. Ernest is incorrectly listed on the Embarkation Roll as Gardener.

Gardiner, Clarence Eustace (SN 4707) Clarence enlisted on August 7, 1915. He was a 23 year old fireman, working for the Victorian Railways. His father was his next of kin.  Clarence was Wounded in Action  - gun shot wound left ankle and compound fracture right thigh. Clarence was discharged on medical grounds on April 9, 1918.

Sadly, for James and Mary Gardiner, even though their four sons survived, two of their grandsons did not, Frederick and Edward, who were the sons of Amelia Gardiner and her husband, Justin Sibert, did not return.

Sibert, Frederick John  (SN 3482) Frederick was born in Berwick and  living in Blackbutt in Queensland when he enlisted at the age of 22 on October 18, 1916. He was a timber-getter. His next of kin was his mother, Amelia, of Yarloop in Western Australia. Frederick Died of Wounds received whilst fighting in France, on October 10, 1917. 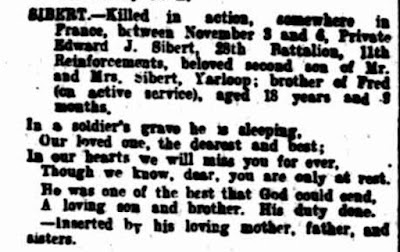 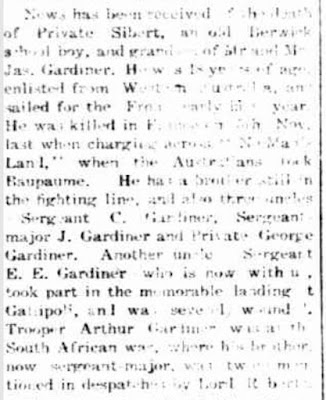 News has been received of the death of Private Sibert, an old Berwick school boy, and grandson of Mr and Mrs Jas. Gardiner. He was 18 years of age, enlisted from Western Australia, and sailed for the Front early last year. He was killed in France on 5th Nov. last when charging across " No Man's Land," when the Australians took Baupaume. He has a brother still in the fighting line, and also three uncles -Sergeant C. Gardiner, Sergeant major J. Gardiner and Private George Gardiner. Another uncle - Sergeant E. E. Gardiner who is now with us, took part in the memorable landing at Gallipolli and was severely wounded. Trooper Arthur Gardiner was at the South African war, where his brother, now sergeant-major, was twice mentioned in despatches by Lord Roberts. (Pakenham Gazette May 11, 1917) 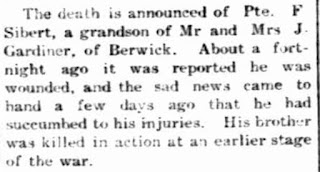 The report on Frederick's death in the Pakenham Gazette
Pakenham Gazette  December 7, 1917  https://trove.nla.gov.au/newspaper/article/92152769
Posted by Heather at 4:48 AM