In September  1943 two men from the local area who joined the services were honored by Bayles’ residents at the monthly euchre and dance conducted by the Red Cross. The two men were Don McDonald who joined the  Air Force and Rowley Boxshall, who joined the Navy (1).

Cr. L.J. Cochrane (2) on behalf  of residents, presented them with shaving outfits and shire certificates (3).  On behalf of Cora Lynn residents, Cr. D. Kinsella also presented Don McDonald with a fountain pen. Both lads responded and were given an ovation. Clark's Harmony orchestra supplied the dance music and the Bayles Red Cross ladies served a bountiful supper (4).

Before we look at the war service of  the two men, we will have a look at the Bayles Red Cross group. The group was established around June 1940 and the inaugural office bearers were President Mrs N. Maughan; vice presidents Mesdames E. Kane and L. Egan; secretary Mrs W. Taylor; treasurer Mrs K. Cole (5). These women are listed, as was usual in those day, under their husband's names but this is who they are (6) -
Mrs N. Maughan - Eleanor Eileen (nee Hogg) the wife of Norman Flett Maughan, listed in the 1942 Electoral Roll as a farmer from Bayles.
Mrs E. Kane - Holly (nee Harker), the wife of Edward Kane, labourer of Bayles.
Mrs L. Egan -  Mary Adele (nee Maria Adela Du Frocq), the wife of Charlie Leslie Egan, labourer of Bayles.
Mrs W. Taylor - either Mildred Annie (nee Cavanagh) the wife of Walter Henry Taylor, labourer of Bayles or Eva Anne (nee Johnson), wife of William George Taylor, a baker, of Bayles.
Mrs K. Cole - Joyce Claudine (nee Hoath), wife of Keith Cole, a clerk, of Bayles.
It was a strong branch and in 1945 they had ninety members, which is amazing for a small town, I will write a history of the branch in the future.

Back to Don and Rowley  - Rowley Boxshall or Roland Arthur Boxshall to give him his full name was born on July 26, 1920, the son of Henry John and Violet (nee Izzard) Boxshall of Yallock. Henry was a local historian,  you can read about him here. Roland enlisted in the Navy as a stoker on September 7, 1942. He was demobilised on March 28, 1946. Roland died in Koo Wee Rup in 1980, at the age of 60. You can read his service record (7) on the National Archives of Australia website, here. The service records for the Navy are just two pages long and do not include a photograph, 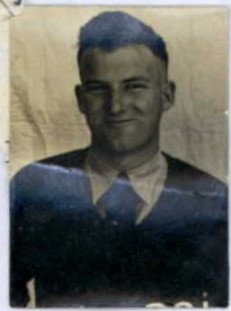 Donald Alexander McDonald (Service Number 410364) was born on October 7, 1920. Don, who was a telephonist with the P.M.G., enlisted in the Air Force on December 6, 1941.  He was the the son of John James and Mabel (nee Wilkinson) McDonald of Scanlons Drain Road in Cora Lynn (right next door to Bayles).  Don was a pilot and his service file tells us about his flight experience. Don had 415 hours of training in various aircraft in both Australia and overseas including an Oxford, Whitley V, and  Halifax II and V. After his training he did 27 hours of  'Non-operational flying i.e Instructional.'

Now we come to his Operational Flying details - his first tour commenced January 28, 1944 and ended August 30, 1944. He was located at the RAF base at Burn, in Yorkshire and undertook 40 sorties and 180 hours of flying, nearly all as 1st pilot. His second tour, in April/May 1945 based at the RAF base at Driffield in Yorkshire, involved one sortie and four hours of flying. All the Operational flying was in Halifax Bombers. I think this is an amazing career for  a boy who grew up on a farm and went to a small school at Cora Lynn (8). I am not dismissing or trivializing the tragic death toll and consequences of the War, but it also presented enormous opportunities for average men and women, like Don, to show what they could do, what inner strength and qualities they had, or to use Tom Wolfe's term - to show they had the 'Right Stuff' (9).

Don obviously did have the 'right stuff' as he was awarded the Distinguished Flying Cross on November 17, 1944 - his citation read - Pilot Officer McDonald has completed numerous operations against the enemy, in the course of which he has invariably displayed the utmost fortitude, courage and devotion to duty. Don was discharged from the Air Force on December 6, 1945.  You can read his service record, here. He married Flora May Barr, of Bayles in 1946. According to the Electoral rolls, Donald continued for  a time in his career with the P. M.G., as in 1949 he was the Postmaster at Fawkner; but by 1954 Don was a grocer at Hampton and in 1968 a greengrocer in the  Moorabbin area. I don't have any other details of Donald after this date. If you have any information about him, I would love to hear about it. 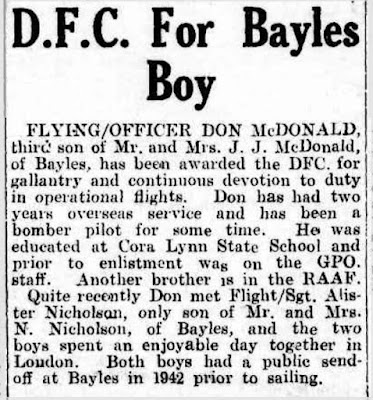 The article about Don McDonald being awarded the D.F.C. Alister Nicholson, whom Don caught up with in London was serving with the Canadian Air Force (10).
The Dandenong Journal, November 29, 1944 https://trove.nla.gov.au/newspaper/article/214168113

Sources:
(1)  Dandenong Journal, September 23, 1942, see here
(2) Cr Les Cochrane, M.L.A., read about him here.
(3) Shire Certificates, read about them here.
(4) Dandenong Journal, September 23, 1942, see here
(5) The Argus June 26, 1940, see here.
(6) Family information about the Red Cross women and Roland and Donald comes from the Electoral Rolls, available on Ancestry;  Trove, and the Indexes to the Victorian Births, Deaths and Marriages,   https://www.bdm.vic.gov.au/
(7) I call it a service record, the official name is - Second Australian Imperial Force Personnel Dossiers, 1939-1947.
(8) Dandenong Journal, November 24, 1944, see here.
(9) Tom Wolfe, the author of the book The Right Stuff - his book about the United States manned space programme and the qualities the men, who were fighter pilots, needed to be selected to the astronaut pool - what they needed was the 'right stuff'. It was first published in 1979.
(10) Dandenong Journal, April 21, 1943, see here.
Posted by Heather at 10:51 PM