This certificate is from the Koo Wee Rup Swamp Historical Society collection and was awarded to Edwin Spencer Johnson by the Shire of Cranbourne, in appreciation of your voluntary enlistment for active service overseas. It is dated march 27, 1943 and was signed by Shire President, Cr Matthew Bennett, M.L.A; Cr Leslie James Cochrane, M.L.A and Shire Secretary Allan Frank Buchanan. 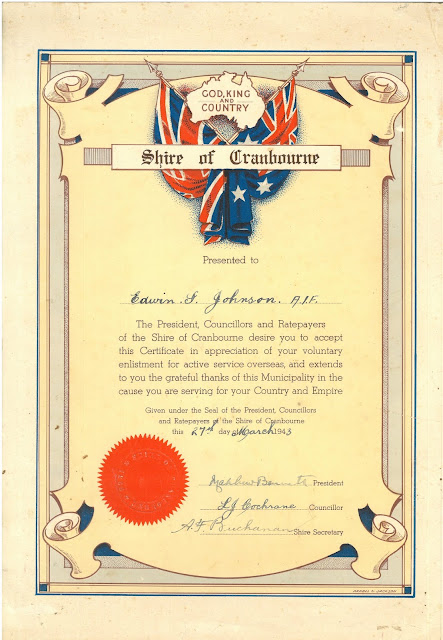 The certificate was presented at a function at the Koo Wee Rup Memorial Hall on Saturday, March 27, 1943 and it was reported on in the Koo Wee Rup Sun of  April the 1st. The dance and presentation night was held under the auspices of the Koo wee Rup Citizens' Send-off and Welcome Home Committee. 250 people were present to farewell the 16 local boys who enlisted - only four of whom were present - Ken Child, Wallie Ellett, Gordon Hobson and Keith Barnes. Cr Cochrane said that the Committee had farewelled 93 servicemen and each man (or their family) were given £2 and the Cranbourne Shire Certificate shown here. The twelve men who could not be present were listed as J. O'Brien, H. Jacob, Ted Johnson, J. Davey, K. McInnes, C. Loveday, L. Colvin, L. Seddon, B.L. Broadbent, A. Burton, Colin Burton and G. Cuff.

Here's some information about Ted Johnson, the man whose certificate we have -
Johnson, Edwin Spencer (SN VX117828 Australian Army) Ted was born in Dandenong on August 29, 1914 and was living in Koo Wee Rup when he enlisted. He was discharged Janaury 11, 1946. On July 15, 1944, Ted married Gladys Warren, of Upper Yannathan, at St Johns Church of England in Lang Lang. Gladys wore a graceful frock of white chantilly lace, with an ivory tuille veil. There is a lovely report of their wedding in the Dandenong Journal of  August 2, 1944, read it here. The report also tells us that Ted Johnson was the eldest son of Mr & Mrs W. Johnson of Charles Street in Koo Wee Rup. Ted and Gladys are listed in the 1954 Electoral Roll in Lang Lang, his occupation was  a butcher. Ted died on August 23, 1990  and Gladys on July 28, 1997 and they are both buried at the Lang Lang Cemetery.

Here is some brief biographical information  of the other men who are listed in the Koo Wee Rup Sun article. The information is from the World War Two Nominal Rolls http://www.ww2roll.gov.au/ and  includes their Service numbers (SN)

Jacob, Harold Allen (SN PM5297  Royal Australian Navy)  I believe this is the right man - he was born in Murrayville and he doesn't have  a place of residence listed, however his next of kin is listed as W. Jacob and there is a William Alexander and Anne Olive Jacob in the Electoral Roll at Koo Wee Rup in 1942, so I believe I have the right man. Harold was discharged June 3, 1946. The family are listed in Tynong North in the 1949 Electoral Rolls.

O'Brien, J Not sure who this is. The Koo Wee Rup Sun article said that he joined the Royal Australian Navy, but I can't find a J. O'Brien with a Koo Wee Rup connection.

The men who signed the certificate were -
Bennett, Matthew (1862 - 1951) Owned a  dairy farm  at Catani. He was a Cranbourne Shire Councillor from 1925 until 1951. He was a member of the Legislative Assembly for Gippsland West from 1929 until 1950 for the Country party and was succeeded Les Cochrane.

Buchanan, Allan Frank.  Cranbourne Shire Secretary from 1935 until 1950. In October 1950 he took leave of absence due to ill health and retired in April 1951. You can read about his retirement in the Dandenong Journal, here.
Posted by Heather at 7:19 PM