The War Memorial at Bunyip was unveiled on Wednesday, February 9 1921 by Frank Groves, M.L.A. There  are 36 names from the Great War on the Memorial. It would be interesting to know how the names were selected as the Australian ANZACs in the Great War website lists 78 people with a  Bunyip address who enlisted and  a further 53 with a Garfield address and 16 with an Iona address, so there was no shortage of potential candidates who could have been honoured. 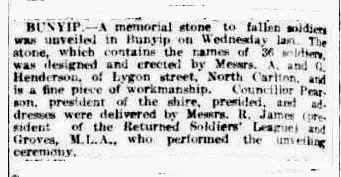 Here is a list of the 36 soldiers and their Service Number (SN) so you can look up their full record on the National Archives of Australia website www.naa.gov.au   If you want to read about other men from Bunyip who are listed and on the Bunyip Methodist Church Honour Roll then click here.

Clarkin, William.  (SN 1522). William was born at Bunyip and enlisted at Tynong in December 1914 at the age of 21. He died of wounds in France on August 26, 1916. His next of kin was listed as his brother L. Clarkin of Iona, although an annotation on his Attestation paper says it is his eldest brother, John Clarkin of Garfield. William is also on the War Memorial at Cora Lynn.

Dawes, Gladstone (SN 4178) Gladstone enlisted on July 20 1915 aged 18. His next of kin was his mother, Mrs A. Dawes of Iona, and his father was listed as Alfred Dawes, Senior. Gladstone was Killed in Action in France on June 17, 1918. Gladstone had four brothers who also enlisted, you can read about the family, here. 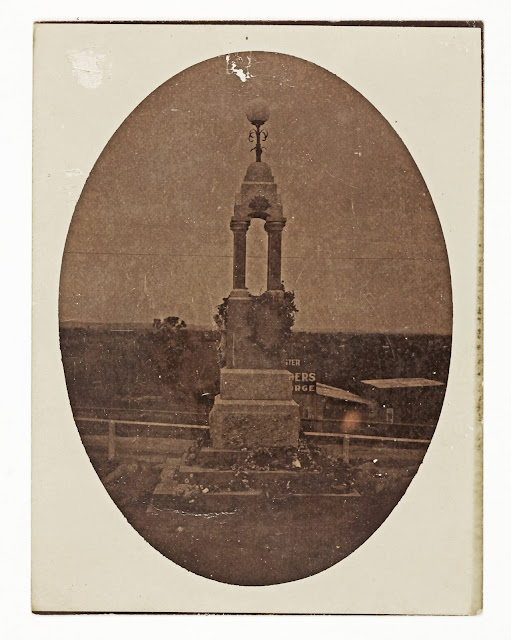 
Devine H. G I have not yet discovered who this is.

Doherty,  Edward Francis (Frank)   (SN 1218) The son of John Doherty, a farmer of Tynong,  Frank was Killed in Action on August 4, 1916 and is also listed on the Cora Lynn War Memorial. 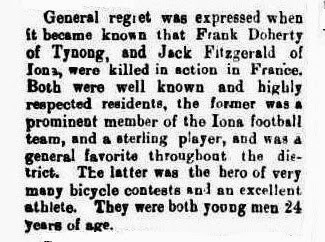 This is a report from the Dandenong Advertiser of  September 14, 1916 reporting the deaths of  Frank Doherty and Jack Fitzgerald.

Fitton James Herbert (SN 3979)  James was born in London and was the brother of Wilfred Fitton, who is listed as living at Bunyip in the 1914 Electoral Rolls. James enlisted on July 28, 1915 and was Killed in Action in Belgium on September 30, 1917.

Gachin John (SN 2528) - his last name is listed as Gaghin and Gaghain on other sources, but looking at his signature on his enlistment paper, I believe Gaghin is the correct spelling. John is the son of Michael Gaghin of Garfield and enlisted on June 16, 1916.   He was Killed in Action in France on April 11, 1917.

Gunnelson Percy Oskar   (SN 893)
Gunnelson Ingelbert Thomas  (SN 3160) Percy and Inglebert were the sons of James Gunnelson of Garfield, sadly they were both Killed in Action, Percy on  May 8, 1915 and Inglebert on October 4, 1917.

Leeson William Herbert Charles (SN 1178) William was Killed in Action at Gallipoli on May 2, 1915. He was the son of Philip Leeson of Garfield. 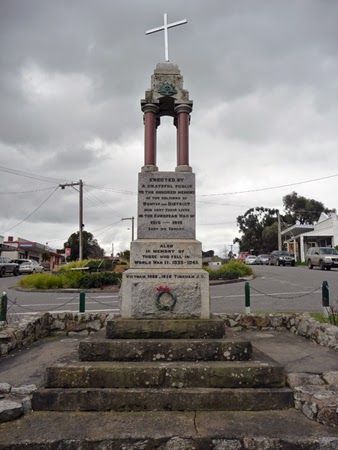 McIvor John Edward (SN 26655) His next of kin on enlistment was his wife Edith, who moved around after John enlisted on January 1, 1916. One of her addresses was C/O Mrs Scealy  of Bunyip, this was Margaret Ellen Scealy, Edith's sister. There may have been another Bunyip connection, but I haven't established it yet, as John was born in  Footscray and enlisted from North Carlton. John was Killed in Action on July 25, 1918.

Milligan, Joseph Lewellen. (SN 5376). Farm hand of Cora Lynn;  his mother was Catherine Milligan also of Cora Lynn. Joseph was Killed in Action on February 23, 1917. Joseph is also on the War Memorial at Cora Lynn.

Pearson Frederick Francis (SN 869)  Frederick was Killed in Action at Gallipoli on April 25, 1915. He was the son of Charles Pearson of Bunyip and had enlisted in September 4, 1914.

Slattery Gerald Malyon   (SN 272) Gerald's occupation on his enlistment papers butter maker and he enlisted on March 15, 1915. In the 1914 Electoral Rolls he was living at Iona and his occupation was Creamery Manager. He was Killed in Action in France on July 19, 1916.

Spence Malcolm (SN 4614) When Malcolm enlisted on August 31, 1915 his next of kin was listed as his sister, Harriet Walker of Bunyip. He was Killed in Action in France on July 20, 1916. Malcolm, and his two brothers, are also listed on the Bunyip Methodist Church Honour Roll.

Stacey Ernest William  (SN4298)  Ernest enlisted on July 7, 1915. He was the son of Thomas Stacey who owned the Railway Hotel in Bunyip. He was Killed in Action in Belgium on October 5, 1917.

Williams Percy Francis (SN 7099) Percy enlisted on April 28, 1916 and was the son of Mary Ann Williams of Main Street, Bunyip. He died of pneumonia in a Military Hospital in England on March 14, 1917.

I wish to acknowledge the research of Chris McKenna of the Berwick RSL, who has researching local soldiers for many years, it has been very helpful in correctly identifying these soldiers.
Posted by Heather at 6:24 PM