The Dawes Brothers of Iona

Dawes, Albert (SN 736)   Albert was a 24 year old carpenter when he enlisted on October 20, 1914. His next of kin was listed as 'Father and Mother' Kirwan's Post Office, via Garfield and as 'Mr Dawes' on the Embarkation Roll.  He sustained a bullet wound in the left wrist and Returned to Australia on February 9, 1916 for a medical discharge. Albert was a Soldier Settler - you can read his file on the Battle to Farm website here.

Dawes, Clifford Gordon  (SN 5086) Clifford was an 18 year old farmer when he enlisted on January 26, 1916. His next of kin was his father, Alfred, of Iona. He Returned to Australia on July 21, 1917 for a medical discharge - 'Gun shot wounds  multiple' was the reason. Clifford is listed on the Bunyip War Memorial. 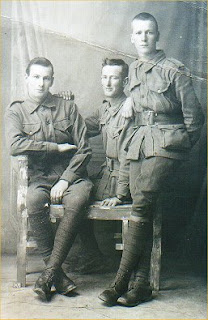 Alfred and Elizabeth (nee Morgan) Dawes are listed in the Electoral Roll in 1914 at Iona. Were these boys brothers? According to the Indexes to the Victoria Births, Deaths and Marriages - Albert was born with the surname Morgan  in 1890 to Louise Morgan, unknown father, but the middle name was Dawes, so that's a clue. When he died in 1962 he had Dawes as a surname,  Alfred Henry as the father and Louise Morgan as his mother.
Walter was born in Richmond in 1893 as Walter George Dawes Morgan to Louise Morgan, no father listed.
Victor was born in 1896 at Bunyip South (old name for Iona), with Dawes as the surname,  to Alfred Dawes and Elizabeth Morgan.
Gladstone was born with Morgan as the surname in 1898 to Louise Morgan, father unknown.  Clifford was also born in 1898 with Morgan as the surname to Frances Morgan and unknown father, however when he died in 1972 he was listed as a Dawes, father Alfred and mother Elizabeth Morgan.

So what does all this tell us? I believe they were raised as brothers. However, there are a few unanswered questions such as - was Elizabeth also known as Louise and/or Frances? Why was the third child registered as a Dawes but the two born in 1898 registered as Morgans - or were Louise and Frances Morgan relatives of Elizabeth and she took the three boys in and raised them with her only child Victor? I don't know.
Posted by Heather at 6:04 PM