This is an interesting article from the Berwick Shire News of November 10, 1915 and illustrates  the fact that the whole community had to make sacrifices during the Great War. As the article says Mr D.H. Rowe, a baker, of Narre Warren,  has been considerably inconvenienced by the quick changes in his staff but he has shown his patriotism in recognising that the needs of the Empire should have consideration before his personal requirements. Donald Hartley Rowe is listed in the Shire of Berwick Rate books from 1912 to 1922. His shop was owned by Sidney Webb. 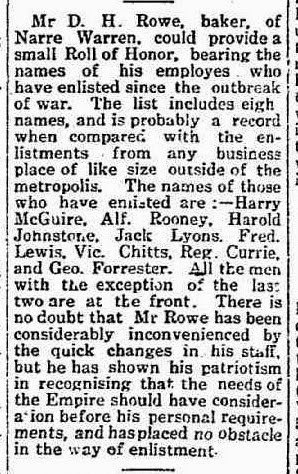 Here is the list of Mr Rowe's eight employees who enlisted and their Service Number (SN), if I could find it. As you can see I have only (fairly confidently) identified six of the eight, based on address or the occupation.

Chitts, Vic. (SN possibly 1715) You would think with such a distinctive name that Mr Chitts would be easy to identify, but not so. There was a Clarence, a Hector and a Russell Chitts who enlisted - Russell was a painter from New South Wales; Clarence was a Dairyman from Sandringham and I have found him and his wife Alice in the Electoral Roll both before and after the War and there is no local connection. That leaves Hector Rudolph Chitts as the most likely, so maybe he was known as Vic. Hector  was nearly 20 when he enlisted on March 7, 1916, his next of kin was listed as his sister, Mrs Downs of East Malvern. His occupation was a farm hand. He Returned to Australia on February 2, 1919.

Forrester, George (SN 4810)  George enlisted on November 6, 1915, the same day as Reg Currie. George was born in Shepparton, and his next of kin was his father, Zephaniah Forrester of Taradale. His occupation was baker.  He Returned to Australia July 24, 1919.

Notice of Reg and George enlisting
Dandenong Advertiser, November 18, 1915 https://trove.nla.gov.au/newspaper/article/88663150
Johnstone, Harold. I cannot identify this man. I have looked for Harold Johnson, Johnston and Johnstone and cannot find a man who enlisted with a connection to the area or to the bakers trade.

Lewis, Frederick (SN 3897) Frederick was 24 when he enlisted. His occupation was baker's driver. His next of kin was his father, Caleb Lewis, of Wilson Street, Berwick.  Fred Returned to Australia March 28, 1919. Fred is also on a list of Berwick Football Club players who joined up, read about them here.

Lyons, Charles Jack  (SN 1394) Jack enlisted on September 14, 1914 at the age of 27. He was born in South Melbourne and enlisted in Tasmania, but his occupation was baker, so this is why I assume that he was Mr Rowe's employee. His actual occupation on his enlistment paper was 'stud groom and baker' He Returned to Australia on May 12, 1918, suffering from rhuematism and 'bad feet'.

McGuire, Harry.  I cannot identify this man. I have also looked at any Harry or Henry Maguires, but to no avail.

Rooney, Alfred George (SN 481) Alf was born at Ballarat and enlisted at Ballarat on October 15, 1914.  I came across an article about Alf in the Berwick Shire News of March 28, 1917 and he was awarded the Military Medal for having carried ammunition and water under heavy fire in the desert fighting of August 9, 1916.  The article goes onto to mention that he was employed by Mr Rowe when he enlisted. He Returned to Australia on January 2, 1919. 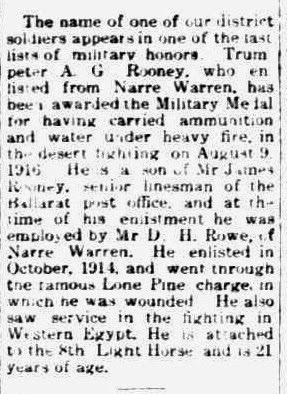