This is a report from the Berwick Shire News of March 8, 1916 which lists the 23 Berwick Football Club players who had enlisted for active service (even though the article says 24). I have done some research to try to work out who these men were and I have also used the research of Chris McKenna of the Berwick RSL, who has researching local soldiers for many years.  I have listed their Service Numbers (SN) so you can look up  their full record on the National Archives site www.naa.gov.au 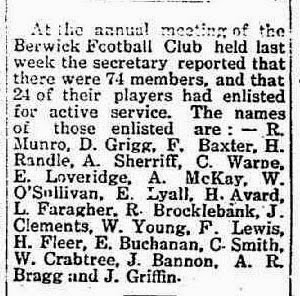 Bannan, John Joseph. (SN 1126) He is listed as Bannon on the War Memorial in Berwick and as Badnan on the Nominal rolls. John was quarryman, who enlisted on June 14, 1915 aged 24. He was married to Mary Ann and they lived in Berwick. He died of disease on October, 16, 1918.

This is a report from The South Bourke and Mornington Journal of May 6, 1915 about Gunner Baxter's enlistment.

Bragg, Arthur Robert (SN 2564)  Arthur and his wife Emily had the Central Hotel Beaconsfield. Arthur enlisted on August 2, 1915 at the age of 39. He was Killed in Action on July 19, 1916.   Arthur is also listed on the Beaconsfileld War Memorial. 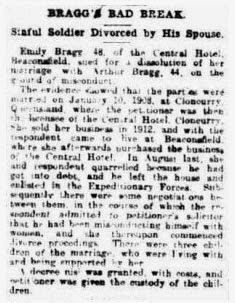 I found this interesting account of Arthur Bragg's divorce in The Truth newspaper of  November 27, 1915 - it's a bit hard to read but it appears that Mrs Bragg owned a hotel in Cloncurry, which she sold and she then purchased the Central Hotel in Beaconsfield. Arthur got into debt, they quarrelled and he joined up, but later admitted that he had been 'misconducting himself with women' The couple had three children. It lists his age as 44, 5 years older than the age he gave when he enlisted.

Fleer, Harold Edward (SN 3112). Harold was a farmer from Harkaway when he enlisted on July 7, 1915 aged 18. Hist parents Edward and Martha Fleer, gave permission as Harold was under 21. Harold returned to Australia on April, 13, 1919.

Lewis, Frederick (SN 3897) Frederick was 24 when he enlisted. His occupation was baker's driver. His next of kin was his father, Caleb Lewis, of Wilson Street, Berwick.  Fred Returned to Australia March 28, 1919. Fred worked for Donald Rowe, baker, of Narre Warren. You can read about him, here.