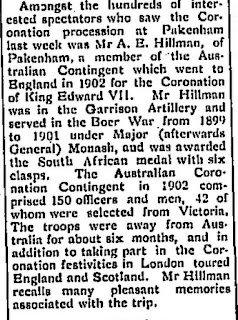 The coronation of King George V1 and Queen Elizabeth took place on May 12, 1937. This was celebrated all over the Commonwealth including in Pakenham where more than 1000 people competed in or witnessed a procession or gymkhana which had been arranged to mark the occasion.  The report in the Pakenham Gazette continued with a list of the activities that happened on the day including the best decorated vehicle competition, a colourful display by the men of the 52nd Battalion, foot races and in the evening a Ball which was held at the Pakenham Theatre (1).

The next week, May 21 1937 the Pakenham Gazette had the following report  - Amongst the hundreds of interested  spectators who saw the Coronation procession at Pakenham last week was  Mr A. E. Hillman, of Pakenham, a member of the Australian Contingent which went to England in 1902 for the coronation of King Edward VII. Mr Hillman was in the Garrison Artillery and served in the Boer War from 1899 to 1901 under Major (afterwards General) Monash and was awarded the South African medal with six clasps. The Australian Coronation Contingent in 1902 comprised 150 officers and men, 42 of whom were selected from Victoria. The troops were away from Australia for about six months, and in addition to taking part on the Coronation festivities in London toured England and Scotland. Mr Hillman recalls many pleasant memories associated with the trip. As we can see from the short article, Alfred Ernest Hillman, not only witnessed the coronation of Edward VII but also served in the Boer War (also known as the South AfricanWar).

Alfred was born in Drysdale in 1869 and had had come to Pakenham with his parents, Edward and Eliza (nee Hopkins) Hillman in 1885 (2). His obituary in the Pakenham Gazette said that he had the distinction of being the first man to enlist from Pakenham for war service (3).

Alfred enlisted in the 2nd Victorian Mounted Rifles (4).  He was awarded the South Africa medal with six clasps.This medal was officially called the Queen's South Africa medal and was awarded to all those who served. You can see the clasps on the photograph, at left. Each clasp represented a location (presumably where a battle took place?) such as Transvaal, Modder River, Johannesburg. The Defence Department, where this photograph comes from, has an explantion and description of the badge as well as a list of the twenty six clasps, here.

The other interesting thing the article said was that he served in the Boer War from 1899 to 1901 under Major (afterwards General) Monash. This is, of course, Sir John Monash, World War One General and later the General Manager of the State Electricty Commission. However, Monash's Australian Dictionary of Biography entry (see here) written by Geoffrey Searle, said that although Monash was a member of the  North Melbourne Battery of the Metropolitan Brigade of the Garrison Artillery, he did not volunteer for and was not invited to take part in the South African War.  Possibly, Alfred may have served under Monash in the Garrison Artillery before he went to South Africa.

Alfred lived for a time in Melbourne after his War service where he married Eva Murcutt in 1904. They had two daughters, Eva Forence, born in 1905 and Winifred Mary, born in 1906, both in Richmond (5). In the Boer War nominal rolls (6) Alfred is listed with the service number of 252 the man with the service number of 253 is Joseph Murcutt, Eva's brother (7). Did they know each other before they enlisted or did they met in the recruiting office, become friends and then Joseph later introduced Alfred to his sister?

Sadly, Eva died in 1906 at the age of 24, and in 1909 Alfred married Cecelia Elizabeth Smith (8). They had one son Alfred George, known as Fred, born in Pakenham in 1912 (9).  Alfred actively associated himself with practically every public body in Pakenham - the Horticultural Society, the Mechanics' Hall, Recreation Reserve, Cemetery Trust, St James Church, Racing Club and the Farmers Union (10).  In the last twenty years of his life, Alfred operated a poultry farm  in Main Street, near the railway station (11). 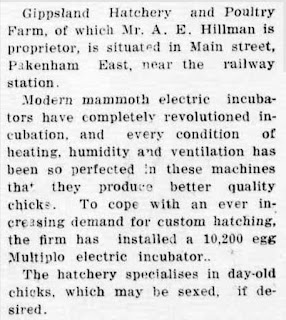