In late 1919 the War Trophies Committee was established and its role was to distribute 'war trophies' which had been captured during the War. A meeting was held on October 16, 1919 and the report of this meeting tells us how the guns would be distributed and it also has an insight in to how the Australian War Museum collection was started -   lt was agreed that all trophies captured by units of the six States should be handed over as soon as possible, and that an immediate distribution should be made of one gun to each of thc C.M.F. (1) units with, which A.I.F. (2)  units have been affiliated. This will absorb only a relatively small portion of the trophies due to the States, and it was thought fitting that the first trophies allocated should go to the A.I.F. battalions and regiments which were responsible for the capture of the trophies as a whole. A first selection will be made from the trophies for the purpose of establishing at a date to be decided upon a National Australian War Museum. This would be the Commonwealth share of the material, and it would include a complete representation of all trophies and relics, as well as a collection of war pictures by Australian artists, some of which have already been painted. Another part of the Commonwealth museum would be a magnificent set of official war photographs, numbering about 12,000, and ultimately all the war diaries and other official papers in connectionwith the various campaigns would be assembled in this Commonwealth museum (3).

On April 20, 1920 The Herald reported on the number of War Trophies to be distrubuted - The War Office Trophies Committee reported that it has distributed nearly 100,000 trophies to the Imperial War Museum, and to the over seas Dominions. Australia, with 1243 guns, has secured the greatest number of trophies. Canada comes next with 1175, and New Zealand has 384. The King desires two guns each for Windsor Castle, Buckingham Palace, the Horseguards, and the Tower of London (4).

A War Trophy Committee was established in each State and they determined how the guns would be distributed. I have found the following references to local distributions in the Shires of Berwick, Cranbourne, Dandenong and Fern Tree Gully. I can only find one photo of a local gun and I do not know how many were actually installed or where or what happened to any of them.

Shire of Dandenong
Correspondence to the Dandenong Shire Council May 1920 - From Victorian State Trophy committee, advising of the distribution of the following war trophies to the Shire of Dandenong: One machine gun, Dandenong; one machine gun, Carrum ; one machine gun, Aspendale. It was decided to also apply for a machine gun for Springvale (5).
Shire of Fern Tree Gully
Correspondence to the Fern Tree Gully Shire June 1920 - From Victorian Trophy committee, notifying that in allotment of war trophies, one machine gun each had been allotted to Fern Tree Gully, Bayswater, Emerald and Belgrave.—The secretary stated that three trustees would have to be nominated for each place, and the guns would have to be mounted.—Cr. Chandler moved that a public meeting be convened at each centre to elect trustees, which must include a member of the A.I.F. in each instance.—Seconded by Cr. Butcher, and carried (6).
Report June 1920 - Fern Tree Gully is very fortunate in the allotment of war trophies. Belgrave, Emerald and Bayswatcr are each to have a gun which was captured by the Australian troops. Three trustees are to be appointed in each place—two Councillors and a member of the A.I.F.—to take charge of the implements of destruction, which will be erected in suitable places. The Council decides that in each of the towns named public meetings be held, at which trustees are to be appointed. The Council was pleased at being so highly favored (7).
Shire of Berwick
Correspondence to the Berwick Shire Council June 1920 - From Victorian State Trophy committee, re distribution of war trophies to townships within the shire, the following towns to receive one machine gun each:—Gembrook, Bunyip, lona, Berwick, Beaconsfield, Pakenham, Narnargoon.—The President moved that councillors have meetings so as to decide what should be done with guns in respective ridings.--Cr Anderson seconded.--Cr Anderson moved that an extra gun be secured for Beaconsfield riding.-Cr Walsh thought they should have one for Cora Lynn (8).
The Council received further correspondence in December 1920 saying that only five guns were allocated - From Victorian State Trophy committee, soliciting co-operation. Also stating that five machine guns had been allotted to the shire (9).
Shire of Cranbourne
Cranbourne
Report September 1920 - On Tuesday evening next, a public meeting will be held in the Cranbourne Shire hall, when trustees will be elected for accepting a machine gun, from the Defence authorities, as a war trophy for Cranbourne (10).

Report December 1920 - The war trophy, assigned to Cranbourne, has arrived. It is a machine gun, captured at Mount St. Quentin. The trustees have the matter of its erection in hand. There may also be a public gathering to receive it in an official manner (11). 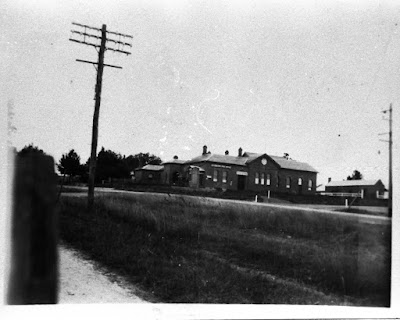 This is a very grainy photo of the Shire of Cranbourne Offices, which shows the War Memorial (unveiled in 1939) and what appears to be a gun next to it, see photo below. 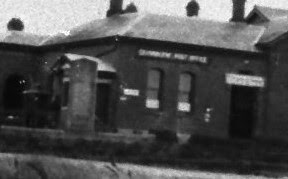 Is that the gun to the right of the Memorial?
It actually looks more like a cannon, but it is the best I can find.
Clyde
Report December 1920 - At a meeting of the Clyde branch R.S.A (12) held at North Clyde hall on Wednesday evening, December 1st....agreed that the president (Mr Marriott) be appointed trustee for R.S.A., for the machine gun, donated to Clyde (13).
Report December 1920 - A machine gun has been allotted to Clyde by the War Trophies committee. At a public meeting held on December 8, it was decided to receive same, and have it erected in the Clyde State school, Mr G. Ridgway, Mr. C. Crosskell and Mr W. Marriott being elected trustees. As Clyde is the smallest town in the State that has been honored by the presentation of a captured gun, those who agitated for its possession are to be commended for their enterprise (13). 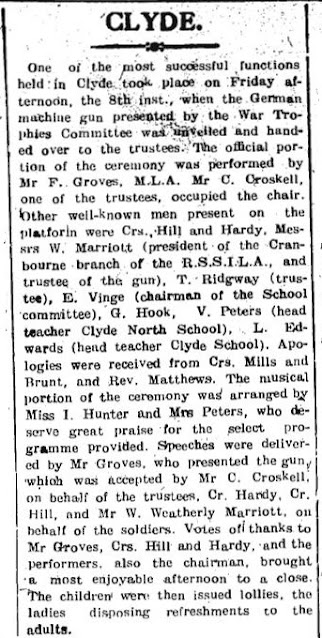 This report of the unveilling of the German machine gun at Clyde was in the
Koo Wee Rup Sun, April 14, 1921.
This is a transcription of the report, above, of the unveiling of the German machine gun at Clyde on April 8, 1921.
One of the most successful functions held in Clyde took place on Friday afternoon, the 8th inst., when the German machine gun presented by the War Trophy Committee was unveiled and handed over to the Trustees. The official portion of the ceremony was performed by Mr F. Groves, M.L.A. Mr Croskell, one of the Trustees occupied the chair. Other well known men present on the platform were Crs Hill and Hardy, Messrs W. Marriott (president of the Cranbourne branch of the R.S.S.I.L.A. (15), and trustee of the gun), T. Ridgway (trustee), E. Vinge (chairman of the school committee), G. Hook, V. Peters (head teacher Clyde North school). L. Edwards (head teacher Clyde school). Apologies were received by Crs Mills and Brunt, and the Rev. Matthews. The musical portion of the ceremony was arranged by Miss I. Hunter and Mrs Peters, who deserve great praise for the select programme provided. Speeches were delivered by Mr Groves, who presented the gun, which was accepted by Mr Croskell on behalf of the trustees, Cr Hardy, Cr Hill and  Mr W. Weatherly Marriott on behalf of the soldiers. Votes of thanks to Mr Groves, Crs Hill and Hardy, and the performers, also the chairman, bought a most enjoyable afternoon to a close. The children were then issued lollies, the ladies disposing refreshements to the adults.
Trove List
I have created a short list of articles on Trove regarding the War Trophy Committee and local Casey Cardinia references, access it here.
Footnotes
(1) C.M.F - The history of the Australian Army has 2 distinct phases. Pre-1947 the army was divided into 'Regular Army' and Citizens Military Force (CMF). The CMF had the most members, as it was formed from the colonial militia groups post-Federation. As both groups were unable to serve overseas, a volunteer force was created for both the First and Second World Wars, called the 'Australian Imperial Force'. After 1947, a standing peacetime infantry was formed and the CMF (which was renamed in 1980 to Army Reserve) started to declined in importance. Source: Australian War Memorial   https://www.awm.gov.au/collection/C1222748
(2) A. I. F - see footnote 1.
(3) The Argus, October 17 1919, see here.
(4) The Herald, April 20, 1920, see here.
(5) South Bourke & Mornington Journal, June 3 1920, see here.
(6) Box Hill Reporter, June 4, 1920, see here.
(7) Lilyday Express, June 4, 1920, see here.
(8) South Bourke & Mornington Journal, June 10 1920, see here.
(9) South Bourke & Mornington Journal, December 23, 1920 see here
(10) South Bourke & Mornington Journal, September 30, 1920 see here.
(11) South Bourke & Mornington Journal, December 9, 1920 see here.
(12) R. S. A - Returned Soldiers Association. It was established around September 1915 (The Argus, September 25, 1915see here) See also footnote 12.
(13) South Bourke & Mornington Journal, December 9, 1920, see here.
(14) South Bourke & Mornington Journal, December 23, 1920 see here.
(15) R.S.S.I.L.A - Returned Sailors and Soldiers Imperial League of Australia. Established July 1916 at a conference of delegates of the various returned soldiers' associations of Australia (The Herald, July 5, 1916 see here.)
Posted by Heather at 9:21 PM