Letter from Cairo from Bruce Forsyth, 1915

On April 15, 1915 Bruce Forsyth, of Iona, wrote a letter from Cairo to his parents. Robert Bruce Forsyth (SN 203) was a 23 year farmer when he enlisted on August 18, 1914. Captain Forsyth was twice Mentioned in Despatches and was also awarded the Military Cross. He Returned to Australia November 6, 1918. Bruce had a Soldier Settler farm near Alexandra, you can read his file on the Battle to Farm website, here. He married Amy Williams in 1920 and died in 1980, aged 88.

The Bunyip Free Press of May 27 1915, published Bruce's letter.
Letter from a Bunyip Soldier.
The following letter has just been received by Mr. and Mrs. W. Forsyth, of Iona, from their son Bruce, who is in Egypt with the First Expeditionary Force: -

Mena Camp, Cairo,
15th April, 1915.
Dear Mother and Father,—
I received your over-welcome letters yesterday, dated 16th March, and was glad to hear you were all well. You said you heard the first contingent had left Egypt. Well, the infantry and one squad of light horse have gone but we don't know where to. There are only A and B squadrons of the light horse left here now. We are, unluckily, the last ones to shift.

Last Tuesday my mate and I took a trip to the Citadel and also went all through the Mosques, they are marvellous places. We had a guide to show us through them. There are several Mosques around the Citadel all fixed up inside as places of worship. The brother, sister and parents of the present Sultan, also the man who built the Mosque, are buried in them, and they have lovely tombs. We had to put on a pair of slippers they gave us before we were allowed to enter, as they say it is holy ground.
There were natives kneeling around every where, rubbing their noses on the ground; and going through all kinds of forms. There are large fountains inside where the people have to wash three times before they pray. It was here Napoleon fired on those mosques from the citadel, and there are great lumps of masonry knocked out of the walls, and also one big cannon ball still wedged in the wall where it struck. There are also holes in the door going up to the citadel. One door in one of these places cost half a million pounds, and is made of gold and silver. 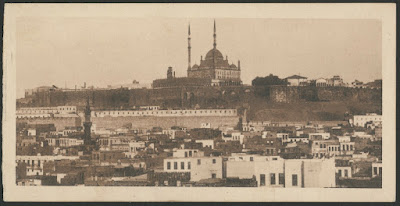 The Citadel in Cairo, as Bruce would have seen it.
Image dated c. 1914-1918. State Library of Victoria Image H99.166/305
The Citadel is full of wounded Indian soldiers from the front. We went in and saw them. Now that the others are gone we get a very easy time of it, mostly just exercising our horses, and we are getting quite lazy.
All the chaplains have gone with the infantry, so our Colonel holds the service on Sunday mornings. He is a good speaker and is well liked. Well, I think I've told you all the news for this time. Remember me to all my friends. I was very sorry to hear of "Bill " Sullivan's death."

Your ever affectionate son,
R. B. FORSYTH.
The letter is edited, you can read the original, here.
Posted by Heather at 9:47 PM