On May 7, 1936 the Koo Wee Rup Sun published the following report - At the Lang Lang State School the Monash Memorial Committee presented the school with a memorial volume last week. Memorial trees were planted in the school grounds. 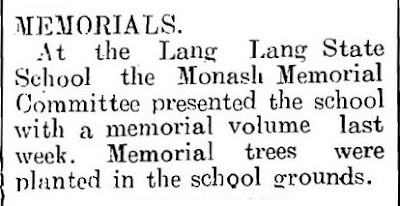 1936 report of the Lang Lang School receiving the memorial volume and memorial tree.
The Koo Wee Rup Sun May 7, 1936

The Age had a fuller report a few days previously - To celebrate the 21st anniversary of Anzac day the Monash memorial committee, through Captain Peters, associated itself with friends of the late Sister Hilda Knox, the late Captain A. Jacka,V.C., Lieutenant Bert Hinkler and ex-scholars of the Lang Lang school who made the supreme sacrifice in the Great War, and presented the Lang Lang State school with a beautiful memorial volume, and planted memorial trees in the school grounds in memory of those honored. (The Age May 1, 1936, see here)

The Monash Memorial Committee was established soon after General Sir John Monash died on October 8, 1931. He was a Civil engineer, a soldier, chairman of the Shrine of Remembrance construction body and manager of the State Electricity Commission. You can read his entry in the Australian Dictionary of Biography, here. The role of the Memorial Committee, chaired by Major-General, Sir Thomas Blamey, was to establish a memorial to General Monash. The memorial took the form of a statue and was finally unveiled on November 12, 1950. It was designed by William Leslie Bowles and is in Kings Domain. The statue was well under way in 1939, but the Second World War caused the understandable delay in the completion of the statue. 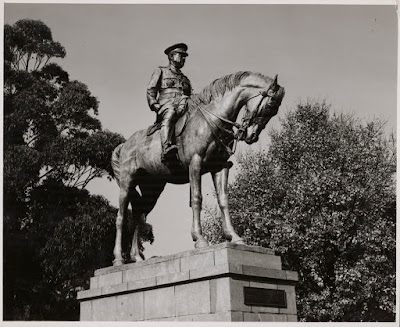 I cannot find any other references in the newspapers of the Monash Memorial Committee donating a book or books to a school, which doesn't mean it did not happen, however if the newspaper report below is correct then the Lang Lang School was the recipient of books the previous year in memory of General Monash and others - At a combined Anzac day service arranged by the local branch of the R.S.S.I.L.A., and five district State schools, more than 200 children, accompanied by their parents and district residents, were present. The address was given by Captain L. G. Buckland, M.C., M.M., and the Last Post was sounded by Trumpeter V. Mills. A feature of the ceremony was the presentation of books to Lang Lang State school library in memory of the late General Sir J. Monash, Captain Albert Jacka, V.C., Squadron Leader B. Hinkler, Sister Hilda Knox, and fallen scholars of Lang Lang
State school. (The Age, April 25, 1935, see here) 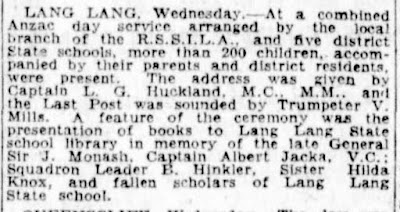 I wondered if there was some connection between members of the Monash Memorial Committee and the town of Lang Lang and that is why they received the books, but I can find nothing obvious. Lang Lang School may have raised funds for the Monash memorial, as this was encouraged by the Education Department, as we can see by the newspaper article, below. But I feel sure that other schools would also have raised funds and yet I can find no reference to them receiving books in honour of the General Monash's memory, let alone receiving them twice, as Lang Lang appears to have. 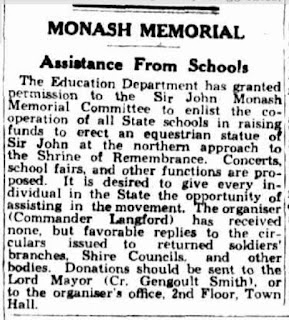 The Education Department allows Schools to fund raise for Monash Memorial.
The Herald May 16, 1932  https://trove.nla.gov.au/newspaper/article/242792403

There are a few questions that I cannot answer - what were the titles of the books and what sort of trees were planted?  Do the books still exist and are the trees still living?

Before we finish, we will have a look at the other people mentioned in this post -

Blamey, Major General Thomas Blamey (1884 - 1951) - the Chairman of the Monash Memorial Committee. Read his entry on the Australian Dictonary of Biography, here.

Bowles, William Leslie Bowles (1885 - 1954) -  the sculptor of the General Monash statue. Read his entry in the Australian Dictionary of Biography, here.

Buckland, John Leslie Gibson (1887 - 1956, incorrectly listed as Huckland in the 1935 newspaper report). Captain Gibson gave the Anzac Day address at Lang Lang in 1935. He was born in Werris Creek in New South Wales, enlisted in December 1914 and was awarded both the Military Cross and the Military Medal. He also served in the Second World War, with the rank of Lieutenant Colonel. Mr Gibson was a consulting electrical engineer, when he was not serving in the Army.

Hinkler, Herbert John 'Bert' (1892 -1933) - aviator who served in the Royal Naval Air Service in the Great War. Read his entry in the Australian Dictionary of Biography, here.

Jacka, Albert (1893 -1932) - was the first Australian awarded the Victoria Cross in World War One. Read his entry in the Australian Dictionary of Biography, here.

Knox, Hilda (1883 - 1917) - Army Nurse, who died of illness whilst serving in France. Read her obituary, here. The obituary mentions that after her death, her parents received many letters from around Australia -  One lady wrote to Mr Knox that her only son was in the 4th L.H., and was in the ward in a hospital in Egypt of which Sister Knox had charge. He had been nursed by her, and spoke of the unfailing attention which they had received. He said, "We used to watch the door for her to come in. Every man of us loved her, and called her 'Our Daughter of the Regiment.'

Peters, Charles Harold (1889 - 1951) - connected to the Monash Memorial Committee. Enlisted in 1916, awarded the Military Cross and Bar. His peace time occupation was a bookseller, he worked at Melville & Mullens.  He returned to that occupation after the War and rose to be the Managing Director of Robertson & Mullens (which later became Angus & Robertson). Read his obituary in The Herald of January 10, 1951, here.
Posted by Heather at 6:10 PM