World War Two soldiers with a connection to Vervale

This post looks at the men who served in the Second World War (WW2) who have  a connection to Vervale. Vervale is a small town on the Koo Wee Rup Swamp between Cora Lynn and Iona. I grew up there on a potato farm, but even I will admit that calling Vervale a small town makes it sound so much grander than what it really is, which is a collection of paddocks. You can read more about Vervale here.
The World War Two Nominal Roll, see here, list fourteen men who have  a connection to Vervale, either through place of birth or residence on enlistment. Some of the World War Two records have been digitised by the National Archives of Australia, www.naa.gov.au
Burnett, John Thomas  (VX44163).  John enlisted in the Army in July 1940 and was discharged in October 1945. He was born in Garfield on December 28, 1916 and was the son of Thomas and Laura (nee Wheildon) Burnett. They are listed in the 1942 Electoral Roll, along with his brother Edgar, at Catani Road, Vervale. Catani Road is Pitt Road, the continuation of 13 Mile Road. The two boys are listed as labourers and Thomas as a Dairyman.

John Thomas Burnett
National Archives of Australia
Second Australian Imperial Force Personnel Dossiers, 1939-1947
Costain, Colin Ramsey (V367934). Colin was born at Inverleigh on January 18, 1890. He enlisted in the Army in March 1942 and was discharged September 1945. His next of kin was his wife Edith (nee Jenkins). Colin was a farmer and they lived at Vervale. Colin's first wife Jessie, the mother of his two sons Ian and Ewen, died in December 1929.  His WW2 record has not been digitsed, so we don't have his photograph. Colin had also served in the First World War (SN 12267), having enlisted in July 1915. He Returned to Australia April 5, 1919.

Mr Damon's letter to the Shire of Berwick complaining about his road.
Dandenong Journal, October 23, 1946  https://trove.nla.gov.au/newspaper/article/214796083
Davies, Albert Maldon (V506952, VX148225). Albert was born on February 12, 1916. The Nominal Roll says he was born in Vervale and enlisted in February 1944. His service record says he enlisted in March 1942 and he was born in Vervale and on other pages his place of birth is listed as Nagambie. He was discharged in May 1945. His next of kin was his mother Evelyn and she lived at Vervale. Albert's occupation was listed as 'building's labourer.'

Albert Maldon Davies
National Archives of Australia
Second Australian Imperial Force Personnel Dossiers, 1939-1947
Evans, Rupert Buller  (VX23604, VX58804). Rupert was born December 26, 1901 at Whittlesea. He enlisted twice from June 1940 to March 1941, then from July 1941. Rupert was a Prisoner of War and died from illness on March 14, 1945 in Borneo. Rupert and his wife Pearl and family lived at Vervale. 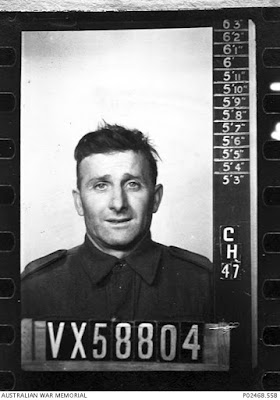 Green, William Alexis (VX104338, V42090).  William was born on June 26, 1897 at St James, and was a farmer at Vervale when he enlisted in July 1942. He was discharged in June 1943. He had also joined the Australian Military Force in 1921 and served for a number of years. His next of kin was his wife,  Margaret. 'Billy' Green was a handy footballer as well as being inventive, as this article, below, attests. William's WW2 record has not been digitsed, so we don't have his photograph. 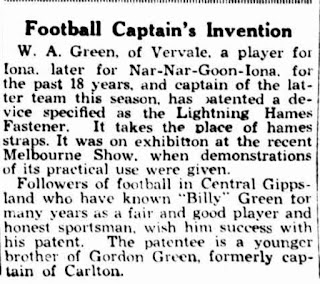 William Green's invention
Weekly Times, October 17, 1931 https://trove.nla.gov.au/newspaper/article/225741909
Land, Arthur Frederick Charles (VX25317). Arthur was born on October 29, 1905 in England. He enlisted June 1940. Arthur died in Ambon, Dutch East Indies of  illness on March 15, 1945. What was his connection to Vervale? The Nominal Roll has his locality on enlistment as Vervale. Arthur's WW2 record has not been digitsed, so we don't have his photograph and nor do we know his occupation at the time. Arthur's latest entry in the Electoral Roll was 1937 when he and his wife Kathleen were living in Cobden Street, Kew and his occupation was an agent, which seems an unlikey occupation for a chap who lived in rural Vervale. Kathleen is listed in the 1943 Electoral Roll at 12 Gordon Avenue, Kew, so I am wondering if the Vervale location in the Nominal Rolls is a mistake. We will find out when his record has been digitised.

Lennox, Keith (VX9720) Keith was born in Vervale on May 3, 1915. He enlisted in December 1939 and was discharged in August 1945. The Electoral Roll list his address as Cottonwood, Catani and his occupation as labourer.  Catani is just south of Vervale. Keith was the son of Robert and Eleanor (nee Forsyth) Lennox. His next of kin was his wife, Joyce, whom he married in 1942. Keith's WW2 record has not been digitsed, so we don't have his photograph. 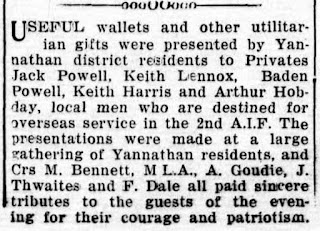 Keith Lennox's send-off.
Dandenong Journal, February 7, 1940  https://trove.nla.gov.au/newspaper/article/216059623
Miller, Lindsay Francis (V285310). Lindsay was born in Yarram on June 20, 1922. He enlisted in Garfield in October 1941 and was discharged July 1944.
Miller, Stanley (VX41895). Stanley was born on  March 20, 1911 also in Yarram. Stanley served from June 1940 until May 1943.
The boys were the sons of James Alfred Miller and his wife Maria May Wilson. In the 1949 Electoral Roll Lindsay and Stanley were both listed as farmers from Vervale; their parents address is 'Little Yannathan Drain, Iona'. Neither of the Miller brother's WW2 records have been digitised.

Sherwell, Benjamin Alex (V285314).  Benjamin was born at Tempy on April 11, 1922.  He was living at Vervale when he enlisted in October 1941 at Garfield and was discharged in November 1945. His next of kin was Robert Sherwell. In the 1937 and 1942 Electoral Rolls Robert George Sherwell has his address listed as 'off 13 Mile Road', Garfield.  Benjamin's WW2 record is another one that has not yet been digitised.

Stewart, James Gilbert (V42247). James was born in Vervale on October 17, 1918 and enlisted at Garfield in August 1940.
Stewart, John  (V100332).  Johh was also born in Vervale on June 3, 1915 and enlisted in Leongatha in May 1941.
For some reason the Nominal Roll does not list either of the brother's discharge dates and their WW2 records have not been digitised. The 1942 Electoral Roll lists John at Catani Road, Vervale and James at Vervale. They are both farmers. Their next of kin when they enlisted was their father, Laurance Mouat Stewart. His address in the 1942 Electoral Roll was 13 Mile Road, Vervale, which as we know is also known as  Catani Road and Pitt Road. 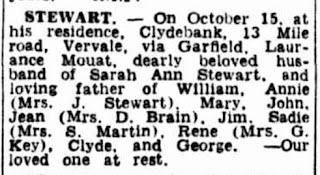 Mr Laurance Stewart's death notice, listing his family of five girls and five boys.  His funeral was held at the Presbyterian Church at Iona.
The Argus October 16, 1956  http://nla.gov.au/nla.news-article84391851
Posted by Heather at 2:41 PM

Email ThisBlogThis!Share to TwitterShare to FacebookShare to Pinterest
Labels: Vervale