Arnold Mercer Davies, served in the Victorian [Citizen] Bushmen during the South African War. You can see his Nominal Roll entry, here.   I am not actually sure how he is connected to this region, however Arnold and Alfred Robinson were welcomed home at a function at the Narre Warren North Mechanics' Institute on Friday, February 22, 1901, so I presume he was farming in the area. There was a report of the welcome home in the local paper and it starts thus  - It is hardly possible that at any country town within the colony such a handsome welcome home was extended to our returned soldiers as that which took place at the Mechanics Institute, Narre Warren North, Friday night last.

The assemblage comprised visitors from Dandenong, Berwick and the surrounding district well as a strong force of the local residents and numbered about two hundred and fifty, possibly a record attendance at any similar gathering at Narre Warren. The idea of inviting ladies was a great success, nearly half the audience being composed of members of the fair sex. Arnold and Alfred were each   presented with a handsome gold medal, suitably inscribed to the effect that they were given by residents as a token of esteem.  You can read a full report of the event, here, in the South Bourke & Mornington Journal of  February 27, 1901. There is more information about his family below.

Private Arnold Davies, son of Sir Matthew Davies, of the 3rd Victorian or Bushmen's Contingent, gives the following account of the attempt made to reach Elands River at the end of July:—
"We are camped now—that is 20 of our division—on a large kopje, about a mile from our old camp, on the Water Hill Fort, and it looks as if we were going to have fairly easy times for a day or two, and I think we could all do with a rest. I suppose you have heard by now that we had a go with the Boers last Sunday, and I think even the most sanguinary amongst us had enough fighting then to do them for a day or two. The wonder is that any of us came through alive; as it is, there are four killed and 21 wounded and missing.

We left the Nek about 8 o'clock on Saturday night for Eland's River to bring in a large convoy. My horse went lame just before we started, and McCulloch lent me his second one. At about 12 that night the advance party came across a small party of Boers at the top of a ridge we had to cross. They fired a few shots, and cleared. We dismounted. I forgot to say there were about 300 of us—Victorians, West Australians, New South Wales, and Queenslanders—and Colonel Airey was in command. We dismounted, as I said, and had a walk round the country, but finding nothing came back and formed up in open order round the hill, waiting to be attacked.

"At daylight we all took another walk, but could see nothing of the enemy. We mounted again about 7, and started off. After going for about a mile and a half our right-flankers fired on the Boers, but they all got away. We rode on again, thinking of when we would get breakfast, when suddenly they opened fire on us from two hills on the left of the road. We dismounted and lay down, and the horses were taken away, and then the fun began. The place where the Victorians were was very like the centre of the two ends of a horseshoe, and about 500 yards away, and we had a cross-fire from each hill, and later on from behind as well. We had ridden fairly into a trap.

While we were on our horses we could see Boers running over the hill, but as soon as we got on the ground we could not see a trace of them. We were lying nearly in the open. If a man made the slightest movement he brought down the whole of the fire on himself. We stayed there till about 1 o'clock, doing nothing, except now and then having a stray shot. The funny thing was that nearly all of us went to sleep. I know I slept for over two hours, and it was a long way the best way to pass the time. At about 1 o'clock we made a dash for a drain about 30 yards in front of us, and two of our men were killed while they were running. Once in the drain things were more comfortable, but we could see nothing to shoot at. I was lying on my back, when a bullet hit the ground at the back of my head, and threw the dirt over my face. That was the nearest shave I had.

"At about 2 o'clock the major called for 20 Victorians to help charge the hill, and I thought I had  done nothing all day, so I went, but somehow I did not like the idea of it till we got started. We fired a few volleys advancing, and then fixed bayonets and charged, but not a shot came after we began to rush, and when we got to the top not a Boer was to be seen. That was about all I saw of the fight. Nearly all our horses were killed, and the horse-holders had by far the worse time of it. What would have happened to us if relief had not come is hard to say. We would never have got out of the hole we were in by ourselves.

We heard yesterday from young Botha, who was wounded, that there were about 1,000 Boers, and they had us surrounded, only they did not know it, but thought by our keeping so still that we had a trap for them."

Family life
Arnold was the son of Sir Matthew Davies - the first Speaker of the Victorian Parliament, who was born in Australia. He was also a land speculator who was declared bankrupt in 1894, and a 'colourful character' that wonderful euphemism  we use to describe slighty dodgy characters. You can read his obituary here, in The Age of November 27, 1912 and his entry on the Victorian Parliament website, here.

Matthew Henry Davies married Elizabeth Locke Mercer in 1875. She was the daughter of Peter and Marion (nee McMillan) Mercer. She died in October 1922.  Matthew and Elizabeth had seven children, the first six born in various suburbs of Melbourne - 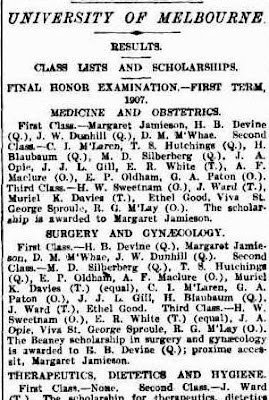