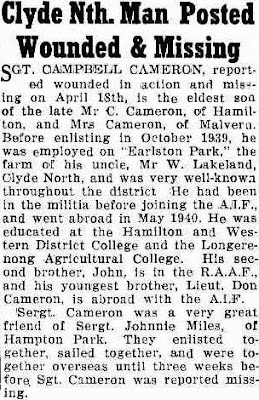 I found this article about Sergeant Campbell Cameron of Clyde North and it also mentions his friend, Sergeant Johnny Miles of Hampton Park, so I thought we will have  a look at these two men.

Campbell Cameron (VX 5850)  enlisted on October 28 1939. He was born on  September 30, 1915 and when he enlisted he was 24 years old and a farmer. His next of kin was his mother, Winifred Cameron, of 31 Valentine Grove, Malvern. According to his AIF personnel dossier available at the National Archives of Australia, www.naa.gov.au,  Campbell was wounded in the withdrawal from Serbia Pass on April 18, 1941, evacuated a few miles south and has not been heard of to date.  A further notation said it has now been reported that he Died of Wounds April 28, 1941. He is buried in the Phaleron War Cemetery, Athens, Greece.

The 1937 Electoral rolls have Campbell listed at Thompson's Road, Clyde North, so I presume that was the location of Earlston Park. Campbell was the son of Campbell and Winifred (nee McFadzean) Cameron. Campbell senior who died in 1933, aged 56 was the son of John Wardrop and Celia (nee Callanan) Cameron. His sister, Celia, had married Captain William John Lakeland, M.B.E., in 1922. William Lakeland was the owner of Earlston Park.

John Miles (VX 5849) was born in Wonthaggi on December 7, 1918. He enlisted, as the article said, the same day as Campbell on October 28, 1939 when he was 20 years old. His next of kin was his father, Arthur Miles, of Hampton Park and his occupation was labourer. During his time serving overseas he was promoted to Lieutenant. In 1944 he married Lauriene Thornton and they had a baby daughter, who was born March 18, 1945 according to his personnel dossier. John was discharged on October 3, 1945. After the war, John and Lauriene settled on a farm at Boorcan, which is between Camperdown and Terang. The Electoral Rolls tell us that from at least 1972 the couple were living in Queensland at Annerley and later in Sprenger Street, Fig Tree Pocket in Queensland. The quaintly named Fig Tree Pocket is just out of Brisbane. John died June 30, 1996 (source Ryerson Index)
Posted by Heather at 10:06 PM