Breaking the news of War Fatalities

The Dandenong Journal of July 9, 1941 had the following interesting article about one of  the most tragic impacts of War - the death of a soldier and having to break the news to their family. Instead of family receiving the news by telegram it was proposed by the Federal Government that it be delivered in person and a local Minister of Religion was one of the preferred people to deliver the sad news. However in country areas  this could be  a trip of many miles and with petrol rationing it may restrict the ability of the Clergy to deliver the news. The matter came up at a Shire of Cranbourne Council meeting in July 1941. Read it on Trove, here, and it is transcribed below. 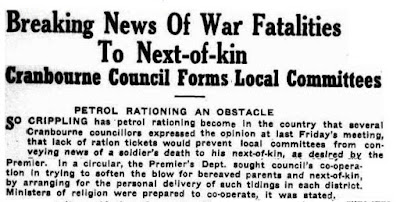 So crippling has petrol rationing become in the country that several Cranbourne councillors expressed the opinion at last Friday's meeting, that lack of ration tickets would prevent local committees from conveying news of a soldier’s death to his next-of-kin, as desired by the Premier. In a circular, the Premier's Dept, sought council’s co-operation in trying to soften the blow for bereaved parents and next-of-kin, by arranging for the personal delivery of such tidings in each district. Ministers of religion were prepared to co-operate, it was stated. Cr Thwaites said that the matter was one of considerable importance.

CRIPPLING PETROL RESTRICTIONS
Cr G. Burhop agreed, but said that he failed to see how it could be carried out unless extra petrol was made available. In his area the ration had been restricted to such an extent that the A.R.P. work was rendered valueless. If a motorist put in a claim, mentioning that he was performing such social services, he still got no more petrol. While they were trying to organise for an emergency the Fuel Board was cutting the ground from under their feet.

Crs Lamperd and Burhop moved that the Premier’s Dept, be advised that council would co-operate if it would make the necessary ration tickets available. Cr M. Bennett, M.L.A., opposed this motion as “too mercenary.” Cr Thwaites thought the local committees should arrange with the ministers of religion to break the news of a soldier’s death, but agreed that it was hardly fair to ask them to provide the petrol.

Mr Bennett, M.L.A., too, thought that the ministers were the right people for the job. The local committees could contact the right ones in each case. He felt sure that if the Fuel Board was approached it would be sympathetic and grant them the necessary ration tickets.

"It's all very nice to say that the Fuel Board will be very sympathetic,” retorted Cr Lamperd, “but while it can find petrol for a lot of non-essential services, it doesn’t make it available for these essential tasks. We should approach it on the matter.”

Cr F. M. Dale thought it would be hard to beat the present method of notification through the post office. Probably if ministers were asked to break the news, local welfare committees would help out with the cost of petrol.

"DO IT EVEN IF WE HAVE TO WALK"
Cr Cochrane said that he couldn’t see that there were any insuperable difficulties in the way. “Even if we had to walk 10 miles to do the job it wouldn't hurt us,” he declared. “This is a public responsibility and we should give our co-operation.” Cr Lamperd: It is a Government responsibility and they’re trying to put it on to us.

Cr Greaves pointed out that the saving of petrol was not the Government’s main concern in this case. It was out to break down the rather stark official telegram. “Even if we have to ride out on a horse or a bike we should agree to do this,” he added. Cr Cochrane deprecated the fact that apparently the petrol outlook was taking precedence over the real object of the request.

Cr Bennett saw difficulties in the way of the successful functioning of local committees, and declared that the best way to convey the news would be through the respective ministers. He believed the Fuel Board would make ration tickets available to them. Local committees would bear the cost.

Cr Lamperd: Motorists will only be getting a quarter of their present ration next month. Down in a scattered district like Pearcedale it might take 4 gallons to get a message out. We only get 7 gallons a month. I say the old method, which was so successful in the last war - getting the clergy to do it - is the best solution.

As the discussion dragged on for forty minutes, Cr Burhop pointed out that it was not for council to discuss the best means of breaking the news. The Federal Authorities had outlined a certain procedure, and council was not called upon to alter that. “We’re willing to co-operate with them as suggested,” he said. “We’re willing to do all they want us to do - but let them give us the means to do it.”

After hearing the letter re-read, Cr Dale agreed that council was only asked to co-operate in a scheme that was already in existence. He suggested the appointment of a committee of riding councillors in each riding, giving them power to co-opt the services of any other citizens they thought fit to help them in the task. Finally, Crs Lamperd and Burhop withdrew their motion, and the following resolutions, sponsored by Crs Bennett and Dale, were carried:
“That the Premier be advised that this council will be pleased to co-operate with him regarding the breaking the news of fatal casualties to next-of-kin;
“That the riding councillors in the respective ridings be appointed a committee to carry out the wishes of the Government as expressed in the letter;
“That application be made to the Liquid Fuel Board to make available the ration tickets necessary to carry out this very necessary duty.”
Posted by Heather at 8:46 PM