In December 1944, a camp was opened in Rowville to house Italian Prisoners of War. It was under the supervision of the Murchison camp and initially housed 100 inmates. The camp was located on the south west corner of Stud and Wellington Road, when Rowville was still very much a country town. It was very low security and the men worked on the neighbouring farms, the engineers depot at the Oakleigh rail yards or the salvage depot at Fisherman's Bend. In June 1945, Rowville became a relocation camp for prisoners who were to be relocated to other areas.

As you might imagine, the prisoners often formed close relationships with the locals, including some romantic attachments. One of these men was Rodolfi Bartoli, who worked on a farm owned by the Gearon family and he and Nora Gearon became attracted to each other. Sadly, I cannot tell you that this relationship had a  happy ending, as it ended in tragedy.  Rodolfi was shot dead on March 20, 1946 by the commandant of the camp, Captain Waterston. Was it cold blooded murder or warning shot which was fired that had a deadly result? 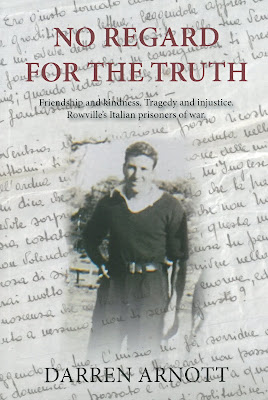 Darren Arnott, has written a fascinating book about the Rowville camp and the tragic shooting. The book,  No Regard for the Truth: Friendship and Kindness. Tragedy and Injustice. Rowvilles's Italian Prisoners of War  has many photographs, transcripts of the official inquiries which took place after the event, lovely letters written to Nora from Rodolfi and letters written between Nora Rodolfi's family in Italy.

An interesting and little known part of our local and military history, this book is  a great read. You can borrow it from the Library, click here, or Darren has links on his website to purchase either  a print or electronic copy, https://darrenarnott.com/
Posted by Heather at 5:42 PM