The McDonald Brothers of Yannathan

Charles McDonald's advertisement
Euroa Advertiser November 1, 1901 https://trove.nla.gov.au/newspaper/article/65537988
Charles died in 1919, aged 69 and Margaret died in 1925 aged 73. The only other thing I could find out about Charles was that he had an unfortunate incident due to one of the many floods on the Koo Wee Rup Swamp, this one was in 1915, when three feet of water covered the road. The No. 6 drain, the location of the incident, runs besides the Bayles-Modella Road. 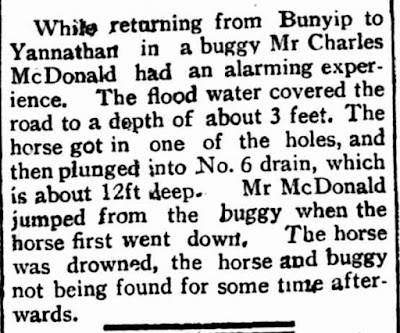 Mr McDonald's unfortunate incident
Lang Lang Guardian, November 17, 1915 https://trove.nla.gov.au/newspaper/article/119513134
Here are the details of the four McDonald boys, of whom two sadly died whilst serving their country. I have included their service number (SN) so you can look at their full record on the National Archives website, www.naa.gov.au.
McDonald, Lachlan John. Lachlan enlisted in the Royal Flying Corp and was killed in a flying accident on January 19, 1918. The Dookie and Katamatite Recorder of February 14, 1918 had the following tribute to Lachlan.

Our Heroes.
Died, in the service of his country, Lachlan J. McDonald, horticulturist, attached to the staff of the Dookie Agricultural College, and well known to residents of this and surrounding districts. The late Mr McDonald ("Mac" to all his numerous friends) spent his early days in the Mooroopna district, and received special training at the orchard and school of horticulture of Mr John West, of Ardmona. Further experience was gained at the well-known Nobelius Nurseries at Gembrook, and lands-scape gardening on station homesteads in the Western district contributed its share towards putting a finish on an education which was to be used, at a later period, in imparting a first-class knowledge of horticultural work to the numerous students who came under his care.
During the years of his connection with the College, Mr McDonald contributed a great number of articles on subjects connected with his work to various agricultural journals and papers, and was a splendid lecturer and teacher. He was an enthusiast in all matters pertaining to his particular branch, and had the faculty of being able to enthuse others. Mr McDonald joined the College staff in
1907, and left for England in October 1915, where he received a commission as Lieutenant in the Royal Flying Corps, became Instructor in Aviation, and, as the result of an accident when flying, met his death at Stockbridge, Hants, England, on the 19th January of this year.
A good public-spirited citizen, and one whose loss will be regretted by all classes in the community. We offer his relatives our heartfelt sympathy. "Vale!"
Dookie and Katamatite Recorder of February 14, 1918 (see here)
McDonald, Norman Victor (SN 934) Norman enlisted on February 8, 1916, same day as his brother, Neil. He was a 31 year old labourer. Norman Returned to Australia July 4, 1919. Norman was  granted a Soldier Settlement farm at Catani, read his file on the Battle to Farm website, here. He married Florence Mary Jackson in 1925 and he lived the rest of his life in Catani and after his death, on October 18, 1968, he was cremated at Springvale Necropolis. 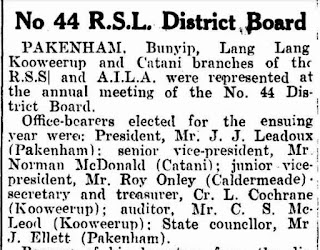 Norman McDonald was involved with the R.S.L.
Dandenong Journal, June 20, 1945 http://nla.gov.au/nla.news-article214331846
McDonald,  Neil Lamont (SN 2060) Neil was a 29 year old labourer when he enlisted on February 8, 1916, the same day as Norman, His father was his next of kin, but this was later changed to his wife Matilda (nee McFarlane), whom he married between his enlistment and his embarkation. Her address was listed as Modella, Longwarry.  Lance Corporal McDonald Died of Wounds on May 14, 1917 received whilst fighting in France.

Marriage notice of Neil McDonald to Matilda McFarlane, which took place on March 4, 1916.
The Age April 10, 1916 http://nla.gov.au/nla.news-article155075807
McDonald, Hector Rodney (SN 3425) Hector enlisted on January 1, 1917. He  was 25 year old farmer and his father was his next of kin. Hector Returned to Australia July 24, 1919. Hector was also granted a Soldier Settlement farm at Catani, read his file on the Battle to Farm website, here. Hector was listed  in the Electoral rolls at Catani, until his death, which took place on February 10, 1952, when he was aged 60.