The Heath Hill State School unveiled their Honor Roll on Friday, March 28, 1919.  William Kelly whose son, Thomas, was one of the fallen, had the honour.  According to the report in the Koo Wee Rup Sun of April 2, 1919 the Hon. A. Downard, M.L.A spoke, as did the Reverend Nasib Jaboor (1), the Presbyterian Minister;  Mr E. Cougle, J.P and the head teacher, Lewis Tamblyn. After the ceremony refreshments were served and the report finished with the day was perfect and a most enjoyable outing resulted.  The Board was made by Herbert Rawlings of Dandenong (2), who also made the Yannathan Honor Board. The Board is now at the Yannathan Hall. Some of the soldiers on the Heath Hill Board are also on the Yannathan Honor Boards, see here. 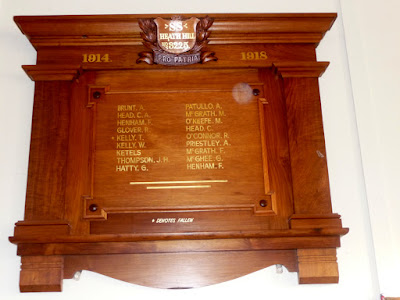 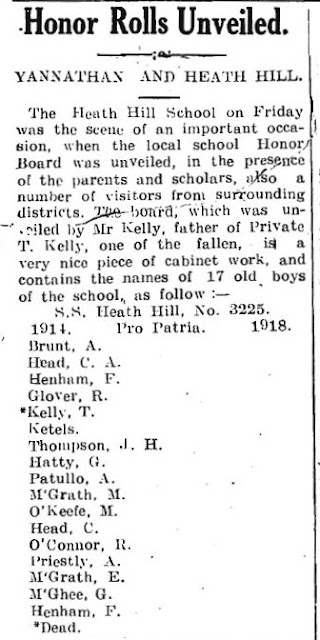 What follows is information on the soldiers on the Heath Hill Honor Roll. There are eighteen names on the Roll. I have included their Service Number (SN) so you can look up their full record on the National Archives of Australia, www.naa.gov.au

Brunt, Archibald Andrew (SN 101)  Archibald enlisted January 11, 1915. He was a 21 year old farmer. Archie Returned to Australia December 18, 1918. Archie's brother Trevor (SN 358)  also enlisted. Trevor enlisted at the age of 24 on August 20, 1914 and he  Returned to Australia March 5, 1919. The boys were the sons of William and Sarah (nee Buckland) Brunt, who lived at Pines, Lang Lang.  William died on September 3, 1912 and Sarah moved the family to Albert Park to live. William was the son of Ralph and Mary Jane (nee Funston) Brunt of Gin Gin Bean, Officer, and thus Archie and Trevor are also listed on the Officer Honor Board.

Glover, Robert Henry (SN 3179)  Robert was born in Nyora, he was a farmer and he enlisted at the age of 21 on November 15, 1916. Robert Returned to Australia July 3, 1919. Robert was granted a Soldier Settlement farm in Poowong, you can read his file, here, on the Battle to Farm website. Robert's brother George Edward Glover  (SN 3774) also enlisted on July 24, 1915, when he was 21. He was wounded in action and died as a result on March 16, 1917. The boys were the sons of Daniel and Emily (nee Jolley/Jolly) Glover, they were also the first cousin of Abraham Patullo, listed below.

Hatty, George Frederick (SN 66) George enlisted March 27, 1916 at the age of 21. George was Killed in Action in Belgium on October 12, 1917. George was the son of William and Jessie Augusta (nee Brown) Hatty and the family was living in Timboon when he enlisted. According to the Electoral Rolls they had previously lived in Lang Lang East and Yallock for a number of years. Two of George's  brothers also enlisted -  David Samuel (SN 279) and Thomas Alfred (SN 5607). The three brothers are listed on the Yallock Honor Board.

Head, Charles Arthur (SN 77664)  Charles enlisted on May 31, 1918, he was a 29 year old wheel wright, born in Oakleigh,  and was living in Goroke when he enlisted. His next of kin was his father, John, of Lang Lang. Charles did not serve overseas and was discharged December 24, 1918, due to the War ending.
There is also a C. Head on the Honor Board. I can't find another C. Head with  a local connection, however Charles' brother Alfred also enlisted.
Head, Alfred John Head (SN 316). Alfred enlisted on July 19, 1916 at the age of 19, he was born in Lang Lang and he was a farmer.  Alfred Returned to Australia April 8, 1919. He was granted a Soldier Settlement farm, you can read his file, here, on the Battle to Farm website.
The brothers were the sons of John and Margaret (nee Forster) Head of Lang Lang.
Henham, F. There are two F. Henhams on the Honour Board and it was difficult enough to indentify one F. Henham, so it there really are two F. Henhams, I have no idea who the other one is. I could not find an enlistment for a F. Henham, so  I looked on the Victorian Births Deaths and Marriages Index and found a Frederick Ernest Henham born in 1895 in Berwick to William Iden Henham and Annie Simmons.  He looked likely, but I could not find his enlistment papers. Then I looked on Trove and found a divorce report of William and Annie from 1906 (read it here). The report said they had lived in Lang Lang and that William was divorcing Annie on the grounds of her 'misconduct' with William Brisbane of Hawthorn. Brisbane was a 'land agent' and the Henhams had purchased their Lang Lang farm through him. In the end the divorce was granted. Now I knew that Frederick  Ernest Henham had a connection to the local area, but I still couldn't find his enlistment records, but discovered the enlistment of a Frederick Ernest Brisbane, who I believe is the same man.
Annie Henham and William Brisbane married on December 10, 1906. Whether William Brisbane was Frederick's real father or he just took his name, I cannot  tell you. William died in November 1910. In 1912, Annie married Gordon Forrest. Annie Forrest died at Loch in 1939 aged 75  - her father's surname was listed as Simmonds, so that confirms she was the same woman as Annie Henham.  Frederick's death record in the Victorian Births Deaths and Marriages Index lists his father as William Brisbane. His two brothers James William (1888-1955) and Reginald Walter (1899-1919) also changed their surname to Brisbane.  There were two sisters as well Annie Grace (b.1884) and Ethel Rose (b. 1885), I am still tracking them down. Here's Frederick's details-
Brisbane, Frederick Ernest (SN 3969). Fred was born in Berwick and was a 21 year old farmer when he enlisted on July 9, 1915. He Returned to Australia April 11, 1916 and was discharged on medical grounds (chronic laryngitis) in August 1916.  When he enlisted, Frederick's next of kin was his mother, Mrs G. Forrest, of Athlone, who as we know was the former Mrs William Brisbane and the former Mrs William Henham.

Kelly, Thomas (SN 16078) Thomas was 21 when he enlisted on December 10, 1915, He was wounded in action and Died of Wound September 27, 1917.
Kelly, William (SN 16077) Nineteen year old William enlisted the same day as his brother. He Returned to Australia September 23, 1919.
Thomas and William, born in Yannathan, were the sons of William and Sarah Ann (nee Stephens) Kelly. 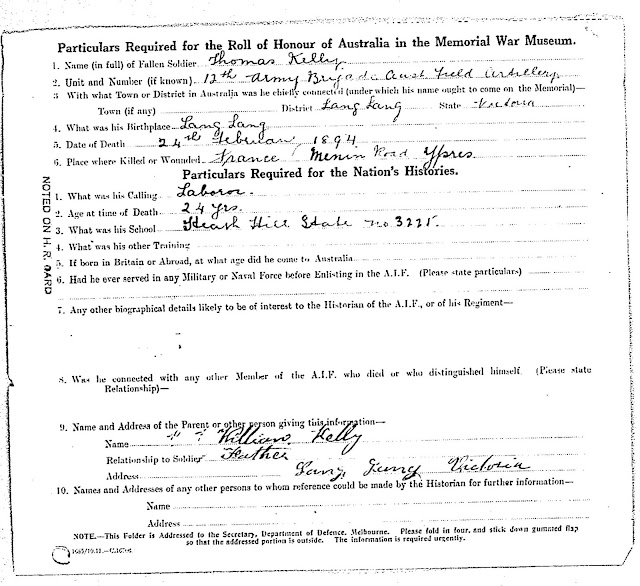 From Thomas Kelly's Roll of Honor circular, held at the Australian War Memorial. It tells us that he attended Heath Hill State School.
https://www.awm.gov.au/collection/R1641913

Ketels I cannot find a Ketels who enlisted, or a Ketel, Kettel, Kettels, Kietel, Kietels or a Kettles. There were 14 men with the name Kettle who enlisted, however, none had a local connection that I could find, so this person is a mystery. There is, of course, Kettle's Road in Lang Lang that goes from McDonald's Track to the South Gippsland Highway, so I wonder if that has a connection.

McGhee, Gordon General (SN 22949) Gordon enlisted on October 27, 1915, he was a 23 year old labourer.  Gordon Returned to Australia May 12, 1919. Gordon's brother, Donald Malachi McGhee (SN 3416) also enlisted, on June 24, 1915. He was a 19 year old railway porter and he was Killed in Action in France on July 19, 1916. The boys were the sons of John and Margaret (nee Johnston) McGhee; they were living at 61 Bridge Street, Northcote when their sons enlisted. Donald was born in Heath Hill and Gordon was born in Lang Lang, according to the Victorian Births, Deaths and Marriages Index or Warragul according to his enlistment papers. Donald's Roll of Honor circular says he attended Yannathan State School. Gordon and Donald are also on the Yallock Honor Board.

McGrath, Edmund (SN 2604)  Edmund was born in Lang Lang and he enlisted at the age of 19 on June 30, 1916.  He was a farmer and his next of kin was his father, Patrick, of  Woolamai. Edmund was wounded in action, gun shot wounds to the shoulder and thigh, and Returned to Australia March 12, 1918. Edmund was the son of Patrick William and Anne Jane (nee Carlton) McGrath. They held a clearing sale on November 23, 1899, so we can clearly establish Edmund's connection to Heath Hill. 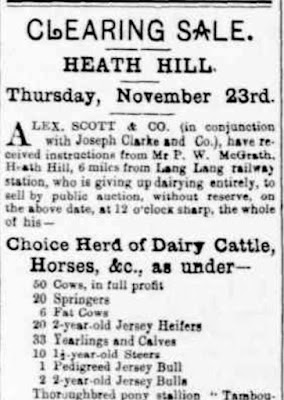 Patrick later became the Valuer at the Shire of Phillip Island and Woolami and he will be assisted in the work by his soldier son, who has recently returned from the front. I presume this was Edmund

McGrath, M - this person is also on the Heath Hill Honor Roll, but I cannot find a M. McGrath with a local connection. Edmund (above) had a brother, Michael, born in 1894 in Lang Lang, so he is a potential, but I can't find an enlistment record for him so at the moment this man remains a mystery.

O'Connor, Robert James (SN 382) Robert was 34 when he enlisted on November 21, 1914. He was born in Heath Hill, was a farmer and his next of kin was his sister, Mary Hanley of Longwarry South.  Robert Returned to Australia May 11, 1919. Robert and Mary were the children of James and Bridget O'Connor. Bridget had died in 1903 and James in 1909.

O'Keefe, Matthew John Allan (SN 3591) Matthew enlisted on April 25, 1916. He was born in Lang Lang, was 19 years old and employed by the Victorian Railways. His next of kin listed was his mother, Charlotte, of Lang Lang. His father was Nicholas Francis O'Keefe. Matthew Returned to Australia May 11, 1919.

Patullo, Abraham Albert (SN 31500) Abraham enlisted on October 2, 1916, at the age of 25. He was a farmer and his next of kin was his father, Thomas, of Lang Lang, which is also where Abraham was born. He Returned to Australia July 13, 1919. Abraham was the cousin of Robert and George Glover, listed above; his mother Elizabeth was the sister of Daniel Glover. Elizabeth and Daniel were the children of Abraham and Ann (nee Lee) Glover.

Priestley - brothers Alfred and Arthur both enlisted, I am not sure which brother was honoured on the Board.
Priestley, Alfred (SN 6877)   Alfred was born in Lang Lang and enlisted on July 11, 1917. He was a 20 year old farmer. Alfred Returned to Australia December 20, 1918 and was discharged on medical grounds - gunshot wound, right shoulder.
Priestley, Arthur (SN 2200) Arthur enlisted at the age of 21 on June 20, 1916. He was a farmer and also born in Lang Lang.  He was wounded in action and died on January 6, 1918.
Their next of kin was their father, Alfred Turner Priestley, of Nullawil. Their mother was Fanny Gray. Her sister, Ellen, was married to David Johnston McGhee, the brother of Gordon and Donald McGhee, mentioned above. Ellen and Fanny were the daughters of George and Mary (nee Kelly) Gray. George's obituary in the Gippsland Independent of October 29, 1915 (read it here) said that the deceased was well known and highly respected around the district, having lived at Heath Hill for a number of years before coming here [Modella].
Shandley, John Adam (SN 2206) John is not actually on the Heath Hill roll, but he was living in Heath Hill when he enlisted, so he deserves a place in this blog post. John was born in Bunyip, enlisted on October 12, 1916 at the age of 21 and he was a horse breaker. His next of kin was his father, Adam, of Longwarry. John Returned to Australia July 1, 1919.

Thompson, James Henry (SN 4953) James enlisted on October 11, 1915. He was a 22 year old farm labourer and his next of kin was his father, Thomas Alfred Thompson, of Glen Wattle, Yannathan. In September 1916,  his parents Thomas and Catherine, were informed that their son had been Killed in Action on July 21, 1916, this fortunately for the family turned out to be false and James Returned to Australia May 15, 1919.

Footnotes
(1)  The Reverend Nasib Murad Jaboor, came to Lang Lang in 1916. He was born in Syria and did his B.A at the American University in Beirut. When he came to Melbourne he studied at Ormond College and Lang Lang was his first Parish. He died at the age of 66 in 1942. You can read his obituary, here.
(2) South Bourke & Mornington Journal, March 13, 1919, see here.
(23) School history from Vision and Realisation: a Centenary history of State Education in Victoria.