Lang Lang had good news in September 1919 as Dr Appleford and his wife, Nurse Alice Ross-King decided to settle into the town. As we can see from the report in the paper, below, the couple had just got married. 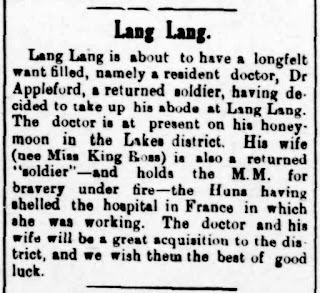 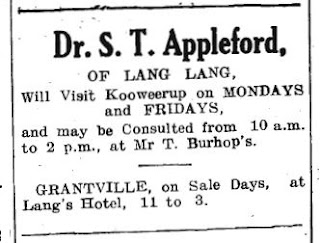 The Applefords set up a private hospital in Lang Lang, in a house beside the Butter Factory in Station Street. The hospital, called Dr Appleford's Private Hospital, was opened, I believe, around April 1921, as the Cranbourne Shire Council had correspondence from the Health Department about the registration of it at their meeting held on April 2, 1921 (see below). The Hospital closed in 1940 as Dr Appleford enlisted in the Australian medical Corps. The family left Lang Lang at this time and moved to Moonee Ponds.

Sydney Theodore Appleford (1891 - 1959) applied for a Commission in the Australian Army Medical Corps on September 15, 1915 when he was 23 years, 11 months old. He left for service overseas in the October and then returned to Australia in September 1916 on medical grounds (gastritis). He recovered and was sent back overseas in February 1917. In July 1918,  he was promoted from Captain to Major. Dr Appleford Returned to Australia January 14, 1919. Dr Appleford re-enlisted in the Army in the Second World War on April 12, 1940 at the rank of Lieutenant Colonel, and was discharged in January 1949. Dr Appleford attended Geelong College and there is a short and interesting biography of him on their website http://gnet.geelongcollege.vic.edu.au:8080/wiki/APPLEFORD-Sydney-Theodore-1891-1959.ashx 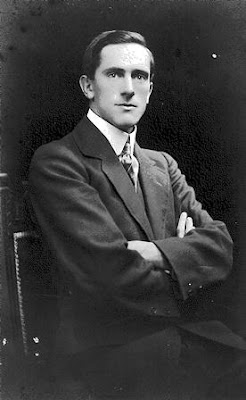 
Dr Appleford's wife, Alice, had also served in the First World War, and as we saw in the article at the top of the post, she holds the M.M. for bravery under fire - the Huns having shelled the hospital in France in which she was working. Alice Ross-King (1887 - 1968) enrolled in the Australian Army Nursing Service on November 5, 1915.When she arrived in Egypt she was assigned to a Clearing Hospital for Gallipoli casualties. In April 1916, the Australian General Hospital, to which she was attached, was transferred to France. On July 22, 1917 the hospital was bombed and for her bravery, Sister Ross-King was awarded the Military Medal, one of only seven Australian Nurses who received this award during World War One.  It was during the voyage home that she met Dr Appleford and they married in Melbourne on August 20, 1919. Sister Ross-King's diary, 1915 - 1919, has been transcribed and can be read on the Australian War Memorial website, here, https://www.awm.gov.au/collection/RCDIG0000976/?image=1 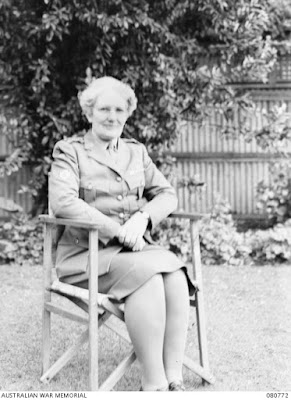 Mrs Appleford also served again in the Second World War -  In the late 1930s she trained Volunteer Aid Detachments in the Gippsland area. By 1940 she and her family had moved back to Melbourne, living at Essendon. She enlisted for full-time duty with the V.A.D.s and her husband was commissioned as a medical officer in the army. By 1942 the V.A.D.s had developed into the Australian Army Women's Medical Services and Alice Appleford was commissioned as a major and appointed senior assistant controller for Victoria. Untiring in her devotion to duty and hard work, with responsibility for some 2000 servicewomen, her organizing skills had great impact on fund-raising activities during World War II. (Alice Ross-King by Lorna M. Finnie  http://adb.anu.edu.au/biography/ross-king-alice-8276) 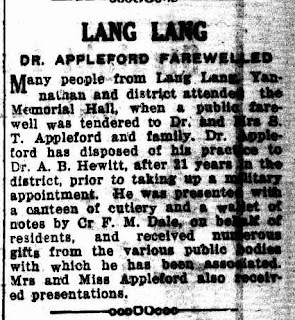