In 1919 most of the soldiers who had served overseas (and survived) had returned home and they needed employment. Thus, the Commonwealth government has made a gift of £500,000, the amount granted the State of Victoria being £142,276, which is to be expended exclusively on works which will provide immediate employment for returned soldiers who cannot be it once absorbed into the ordinary activities of the community. The amount allotted to each municipality in Victoria was £742. (South Bourke & Mornington Journal (SBMJ) March 20, 1919)

Other conditions included  No portion of  the grant is to be available for the regular employee in the service of a local government authority, nor for any administrative expenses, and the local body must not consider applications for employment on these new works from men who are already in employment. If it should happen that returned soldiers are not available in sufficient numbers within the bounds of any local government area, the Repatriation department reserves the right to send soldiers from other centres, and thus take full advantage of tho new openings for employment. (The Age March 5, 1919)

When the Berwick Shire received the letter regarding this money The secretary suggested that Pakenham and Beaconsfield members expend their portion in clearing roads in their respective ridings, and that, in Berwick and Iona ridings, the money be expended in having metal crushed. The money had to be expended within six months. The clearing of roads was work suitable to put returned soldiers on. (SBMJ March 20, 1919) The suggestion was accepted by the Council.  The South Bourke and Mornington Journal approved  of this idea and wrote     A goodly number of returned men have availed themselves of this opportunity to become once more used to working conditions in their native land. Much valuable work may be done in this way, which other wise would have remained undone for years. (SBMJ July 10, 1919) 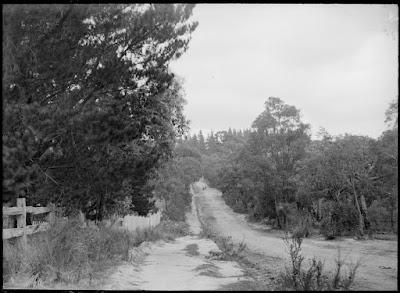 Road, Beaconsfield. c. 1914.  Photographer: G.G.M.
This road would have looked  much the same in 1919, when the Berwick Shire Council used the money for clearing roads.
State Library of Victoria H2002.198/29

At a  Cranbourne Shire meeting   Cr. Hill, suggested that clearing be done on several roads. -Secretary said the money would be divided equally between the riding.-- Councillors were at first sceptical whether the money could be used, but after discussion Cr. Hill moved that the money be equally divided between the three ridings, councillors to draw up works in their respective ridings. (SBMJ April 10, 1919)

There were a number of suggestions as to how this money should be spent. The Closer Settlement Board wrote to Municipalities - suggesting that the council take into consideration the question of utilising a portion of such money in the improvement, of roads leading to estates purchased, for the settlement of returned soldiers. (SBMJ April 17, 1919)

Members of the public also had ideas as to how the money should be expended - this is a letter to the Editor from E.V. Purcell of Greenvale, Cranbourne. Now is the accepted time to make the Fisheries road suitable to travel upon. Seeing that the Commonwealth Government voted £500,000 to the various municipalities, to be spent on local government works, and to give returned soldiers employment, the Fisheries road could be made passable by a judicious and nominal outlay, for the time being. Eventually it will require to be put in order, as settlers will not be ignored indefinitely if it's their desire to make use of their holdings; such cannot be accomplished without good roads. (SBMJ, March 13, 1919)