A welcome home to local men was held in the hall on Saturday last, the 29th ult., when the following soldiers were entertained and each made the recipient of a handsomely framed certificate (except in the case of  Pte. E. Cook, who received a framed enlarged photograph of himself, suitably inscribed), Ptes. E. Cook, B. Mullett and E. Johnstone. The following returned soldiers, who are newcomers
to the district, were also present, and were tendered a welcome: Lieut. Morris and Staff-Sgt. Lovell. The relatives of the following soldiers who have fallen also received certificates, except in the case of Pte. I. Slessar, in which instance a framed enlarged photograph was given;  Captain Raleigh, Ptes. R, Copeland, H. Warner, - Cornwall, F. B. Doyle and R. Slessar. Pte. Ede and A. Doyle, who have returned, but were not present, are also to receive certificates. 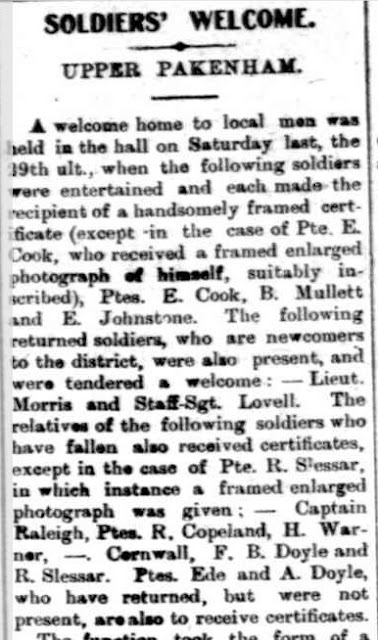 These are the men listed with their Service Numbers (SN) so you can look up their full record on the National Archives of Australia website www.naa.gov.au

Cook, Edward (SN 2423) Edward enlisted at the age of 29. He was an orchardist and his next of kin was his mother, Mrs M. Cook of Army Road, Pakenham East. Edward Returned to Australia January 10, 1918 and was discharged on medical grounds suffering from pleurisy and broncho pneumonia. 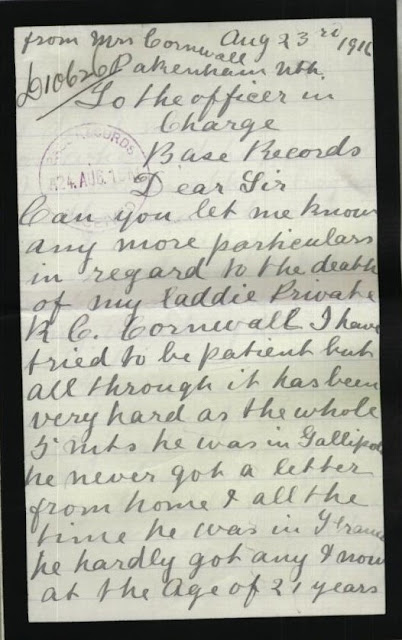 
Doyle, Arthur James (SN 1374) Arthur was 28 when he enlisted on August 2, 1915. His next of kin was his mother Georgina.  He was sent  overseas but Returned to Australia January 1916 and was discharged on medical grounds on March 11, 1917 - Tubercular Pleurisy.
Doyle, Frank Bertram (SN  4165)  Frank was 19 when he enlisted on July 22, 1915. His next of kin was his father, John, of Nar Nar Goon. Frank died on December 16, 1916 in the University War Hospital, Southampton after being wounded whilst fighting in France. Frank and Arthur were brothers. I believe their parents were separated as the notation on Frank's record says 'father away from home for ten years' Frank's mother Georgina Doyle (nee Kirk) gave her consent to Frank's enlistment. Her address was 'Hill View', Pakenham Upper. 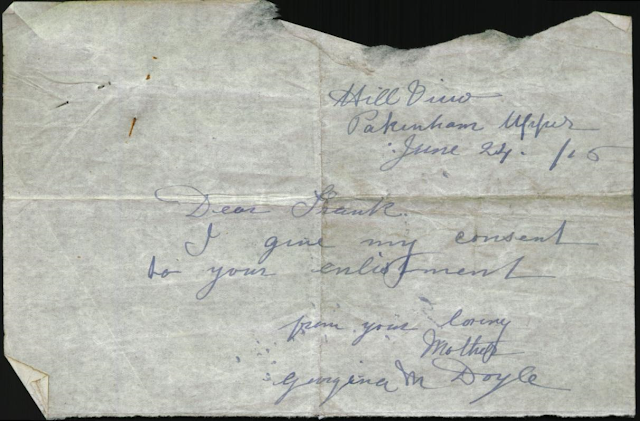 Ede, Harry  (SN1634) Harry was 40 when he enlisted on November 20 1914. He was an Accountant and a widower and his next of kin was his friend, Mrs P. Fairbairn of Upper Pakenham.  Harry Returned to Australia March 3, 1916 and was discharged on medical grounds in the September. He had Neurasthemia (a 'nerve complaint'). Harry has spent 6 months at Gallipoli and according to his file had lost four stone in weight whilst on Gallipoli and was very tremulous and completely run down. Harry had also served in the Boer War in the Second Battalion, Australian Commonwealth Horse.

Johnstone, E Not sure who this is - I cannot find a E. Johnson or Johnstone with a local connection.

Lovell, Francis  (SN 7)  Francis was 24 when he enlisted on December 13, 1914. He was a fuel merchant. His next of kin was his friend, a widow, Mrs Grace Goland of Collingwood. They were married in 1915. Staff Sergeant Lovell  Returned to Australia January 19, 1916 as he was suffering from severe epilepsy. We know he lived in Pakenham Upper after his return as that was his address when his War pension was determined. Grace's son from her first marriage, William Martin Goland, had been born in 1903. 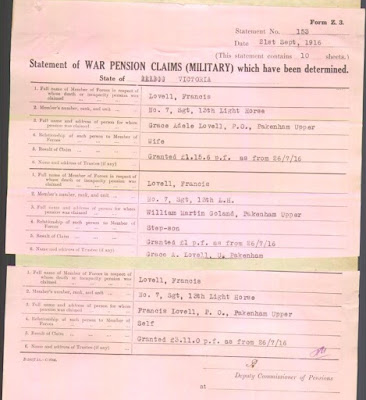 Morris, John Crisop.   Lieutenant John Crisop Morris is listed in the Electoral Rolls at Pakenham Upper in 1919, his occupation is orchardist. He enlisted on September 24, 1914 at the age of 38. He had the unusual occupation of actor and he was born in Townsville, enlisted in Melbourne and his mother, who his next of kin, was also from Townsville. He Returned to Australia December 16, 1917 suffering from 'cardiac arythmia'. John had also served in the Boer War - he enlisted on May 1, 1902 in the '7th Battalion Australian Commonwealth Horse for service in South Africa'

Mullett, Bertram James (SN 599) There is a Bertram James Mullett, farmer, of Gembrook South in the Electoral Rolls from 1909 and I am assuming that he is the same Bertram James Mullet who enlisted on October 26, 1914 at the age of 31. His occupation was farmer and his next of kin was his father, James, of Marshall in Victoria. He served in Egypt, as we can see from the report in the Dandenong Journal, below.  Bert had diptheria and Returned to Australia July 10, 1916 and was discharged on medical grounds in October 1916.

Raleigh, George Hebden.  Captain Raleigh  has an entry on the Imperial War Museum website -  Unit: Essex Regiment, Squadron Commander of the 4th Squadron, Royal Flying Corps. Death: 20 January 1915 Dunkirk fell out of plane on ground Western Front. You can see a photo of him and read more about his career here.  George's parent - William Thorp and Matilda (nee Hebden) Raleigh, had a property 'Goronga' at Pakenham Upper.  William and Matilda married in 1873 and they had a number of children including George, who was  born in 1878.

Slessar, Robert (SN 3821) Robert enlisted on July 9, 1915. He was a 29 year old Engineer. His next of kin was firstly his father, Robert Slessar, of Pakenham East and after his father died in July 1916,  his mother Mary Grierson Slessar of 'Oak Bank' North Nar Nar Goon. Robert was Killed in Action in France on August 27, 1916. He must have died almost the same day as his father - see report of father's death, below. 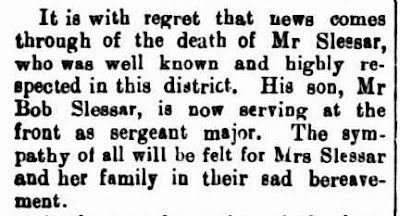 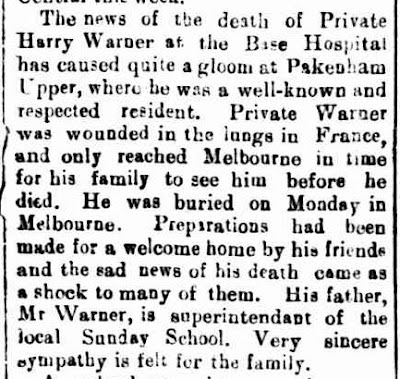