In this post, in our series of Brothers who enlisted, we are looking at the Blackwood Brothers of Pakenham South, the sons of John and Mary Anne Blackwood.

Mary Ann was born at Clyde and was the daughter of Clyde pioneers Thomas and Sarah (nee Wells ) Cadd  who took up land in Clyde in 1862. Mary Ann died in July 1950, aged 88 years old. 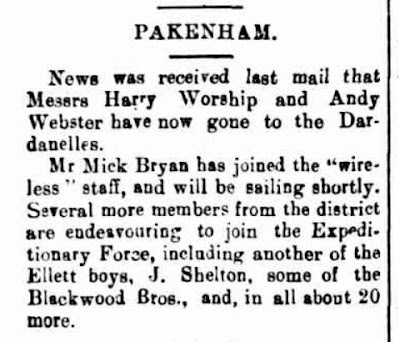 A report of Andrew and Archie's enlistment in the Dandenong Advertiser, July 1 1915. The article mentions the 'Ellett boys' - you can read about them here.
http://nla.gov.au/nla.news-article88656802


Three of John and Mary Anne's sons  enlisted in the Great War, Andrew, Archibald and James. In each case their mother was listed as their next of kin.
Blackwood, Andrew Joseph (Service Number 1207)
Blackwood, Archibald McDonald (SN 1206) Andrew and Archie both enlisted on July 13, 1915. They were both farmers and both Returned to Australia May 15, 1919. However, Andrew was 18 when he enlisted and Archie was 22 years old.
Archie was a recipient of a Soldier Settlement Farm after his return, you can read his file on the Battle to Farm website, here. 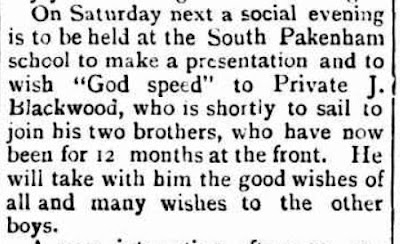 A report of James' departure to join his two brothers was in the
Dandenong Advertiser February 8, 1917
http://nla.gov.au/nla.news-article88657109
Posted by Heather at 11:33 PM