The Cranbourne Library is pleased to be hosting the Writing the War Exhibition from October 26 to December 7, 2017.  TheWriting the War exhibition looks at stories of war from seven Australians. Nurse, bank clerk, farmer, sports master, journalist, artist, activist - hear their extraordinary stories of war in this moving exhibition tracing World War One through personal accounts. 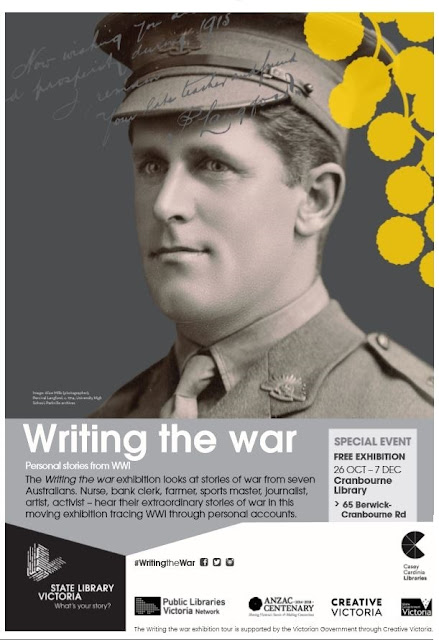 The featured writers are - Percival Langford, Jessie Traill, Sir Keith Murdoch, Vida Goldstein, Alice Kitchen, George Auchterlonie and Eric Chinner.
Here's some more information about these people - Percy Langford was the inaugural Head Master at Dandenong High School and served at the School until 1934. Jessie Traill was an noted artist and  a resident of Harkaway, you can read about her here. Sir Keith Murdoch - newspaper journalist and owner - you can read Keith's entry in the Australian Dictionary of Biography here. Vida Goldstein was a pioneering feminist and suffragist and was one of the first women to stand for Parliament - she stood as a Senate candidate in the 1903 election. You can read Vida's entry in the Australian Dictionary of Biography here. Alice Kitchen served in the Australian Army Nursing Service from August 1914 until she was repatriated to Australia in August 1919. Sister Kitchen kept  a diary of her service. George Auchterlonie was born at Narracan (near Warragul) and served in the 8th Light Horse Regiment. He kept  a diary and was  a keen photographer. Eric Chinner was killed at the Battle of Fromelles in July 1916.

The Library has a series of  activities in connection with this exhibition - all free and all welcome!
Thursday November 2 at 11.00am.
Michael Madden - Australian Victorian Cross recipients
Michael Madden is a multi-award winning writer and will talk about his current project
- researching and writing a book based on the 100 Australian recipients of the
Victoria Cross covering their medals, statues, monuments and final resting
places. Michael runs his own Military Medal Business in Berwick and has supplied
replica medals and professional advice to service personnel, Museums and even
Hollywood movies!

Thursday November 9 at 2.00pm.
Official Launch of Writing the War Exhibition by the Hon. Anthony Byrne. Guest
speaker is Lambis Englezos
Lambis Englezos is a Greek-born, retired art teacher from Melbourne with a
‘magnificent obsession’ to find, recover, and honour Australia’s missing diggers from
the Battle of Fromelles. He is the co-founder and driving force behind the
internationally renowned ‘Friends of the 15th Brigade’. Lambis is a central figure in
Patrick Lindsay’s book ‘Fromelles’ and is acknowledged in the Robin Corfield book
‘Fromelles - Don’t Forget Me Cobber’, for his contribution to the remembrance of this
significant event in Australian history. He also featured in television stories on ‘60
Minutes’, and the ABC ‘7:30 Report’ on the fate of the missing diggers. Additionally,
Lambis has written and been featured widely on this subject in print media.
Lambis received the Order of Australia in 2008 for his Fromelles work. He also won
the inaugural Shrine Medallion in 2010 and was honoured by the RSL of Victoria with
their ANZAC Award in the same year.

Tuesday, November 14 at 11.00am.
Local History Librarian, Heather Arnold - How we honored our soldiers
The talk will look at the various ways communities honoured their soldiers once the
War ended. Heather will look at Avenues of Honour, War Memorials and Memorial
buildings such as Halls, Schools and Hospitals.

Saturday November 18 at 1.30pm and
Monday, November 20 at 7.00pm
Jane Rivett-Carnac from the Narre Warren & District Family History Group -
Researching your Military history
There is more to a service person than Name Rank and Serial Number. Join us for a
90 minute talk that will explore the many avenues available on the internet and in
your library to gather the information you need to write their story. It may be a soldier
sent to Sydney Cove with the First Fleet, a bushman in the Boer War, a Great Uncle
in the Great War or Dad in the Second World War. Nurses Sailors Airmen and
Civilians also have a story to tell.

Wednesday November 22 to Friday November 24 - 11.00am to 2.00pm
Find a Soldier – drop in sessions.
Need help finding information about your military personnel ancestors? Members of
the Narre Warren and District Family History Group and Local History Librarian,
Heather Arnold, will be available to help you find your solider. Drop into the Family
History Room at the Cranbourne Library any time between 11.00am to 2.00pm.

Thursday, November 23 at 2.00pm
Marg Dennis - Lest We Forget
Featuring songs from World War One, World War Two and the Vietnam War.
Margaret performs a moving and unforgettable tribute to the war years of the
twentieth century.

Thursday, November 28 at 7.00pm
Ross McMullin - Pompey Elliott At War: In His Own Words
Dr Ross McMullin is an award-winning historian and biographer who graduated from
the University of Melbourne with degrees in Law and Commerce and a PhD in
Australian History. His latest book about Australia’s most famous general in World
War I is Pompey Elliott at War: in his own words. Ross’s previous biography,
Pompey Elliott, was awarded the Christina Stead Award for biography and the
Melbourne University Press Award for literature while Farewell, Dear People:
Biographies of Australia’s Lost Generation was awarded the Prime Minister’s Prize
for Australian History and the National Cultural Award. Ross has also written books
about political history and articles by him have been published in many newspapers
and periodicals.

Email ThisBlogThis!Share to TwitterShare to FacebookShare to Pinterest
Labels: Writing the War exhibition