Tourism during the War 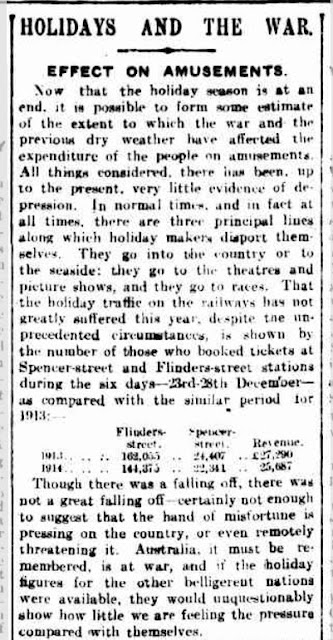 There was an interesting article in The Age of January 7, 1915 entitled 'Holidays and the War: effect on amusements'. I have partly reproduced it below and you can read the full article here. There is some local connection as it talks about tourism in Gembrook.

Holidays and the War: effects on amusements
Now that the holiday season is at an end, it is possible to form some estimate of the extent to which the war and the previous dry weather have affected the expenditure of the people on amusements. All things considered there has been, up to the present, very little evidence of depression. In normal times, and in fact at all times, there are three principal lines along which holiday makers disport them selves. They go into the country or to the seaside; they go to the theatres and picture shows, and they go to races. That the holiday traffic on the railways has not greatly suffered this year, despite the unprecedented circumstances, is shown by the number of those who booked tickets at
Spencer Street and Flinders Street stations during the six days - 23rd-28th December as compared with the similar period for 1913

Though there was a falling off, there was not a great falling off -  certainly not enough to suggest that the hand of misfortune is pressing on the country, or even remotely threatening it. Australia, it must be remembered, is at war and if the holiday figures for the other belligerent nations were available, they would unquestionably show how little we are feeling the pressure compared with themselves.

Some holiday resorts, it is interesting to note, did better this season than they did last. Thus Gembrook attracted 3482 sightseers during the week  week ended 28th December, as compared with only 2390 in 1913. On the other hand, Fern Tree Gully showed a falling off. Warburton about held its own, while the seaside places - largely owing to the wet weather on Christmas day showed an average decline of about 20 per cent.

With regard to indoor amusements, theatres, concerts and picture show -  the position of Australia is again very favorable. One leading theatrical manager said yesterday'It would probably be a fair estimate if we said that our returns, since the war began, had fallen off by 25 to 30 per cent'.

One form of amusement that is showing practically no sign of bad times, and that hardly seems to have heard of the  war, is that of horse racing. It was remarked that the crowd at Mentone on Saturday last was one of the largest, if not absolutely the largest, seen on the course - certainly larger than at the corresponding meeting twelve months ago. The suburban racing clubs publish no statistics of attendance so only a general estimate can be formed. At the outbreak of war five months ago people did stop away from the racecourses in large numbers. The crowd at Flemington on Cup day was the smallest for some years, and the net profits of the Cup meeting, estimated at about £8000, are rather less than half those of last year. Nevertheless, the Cup day crowd was a great one. and the subsequent records put up by Boxing day and New Year meetings in the country as well as by Mentone, go to show that the cult of the horse is not yet affected by the war.

Of interest is the fact that Gembrook had over 3000 visitors in a week over the Christmas period. This is a huge amount of people given that the population of the town at the time was around 500. (Victorian Places)