Knitting for the War effort

Australia entered the Great War on August 4, 1914 and it wasn't long before the local women began their work of supplying clothes and comforts for 'the use of our boys whilst doing their country's work' as Mrs Bickerdike wrote to the Lang Lang Guardian in August 11, 1914. 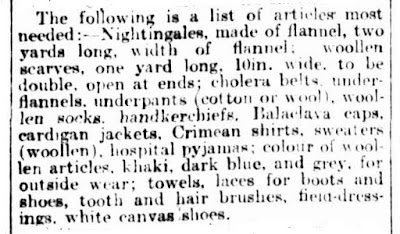 There are a few unusual items on the list - a nightingale is presumably a night shirt; a Cholera belt is a band of flannel or silk worn around the waist supposedly to prevent gastrointestinal ailments.   A Crimean Shirt was a coloured flannel shirt.

A week later a 'successful sewing meeting' was held at the Yannathan Hall and the Lang Lang ladies also began organising sewing bees.

By the end of the month the women and children of Yannathan and Lang Lang were well into the production of garments and supplies. Elizabeth Alexina (nee Wastell) and her husband, Arthur Bickerdike had a farm at Yannathan and they left the area in September 1916 and moved to Hampton, according to a report in the Dandenong Advertiser of September 28, 1916. Mrs W. Currie was Annie Ellen (known as Nellie, nee Stillard) who was married to William Russell Currie, store keeper at Yannathan. Miss Hardy, Secretary of the Lang Lang guild, is possibly Elizabeth Charlotte Hardy who is listed in the Electoral Roll at Lang Lang in 1914, her occupation being dressmaker.
Posted by Heather at 11:48 PM