This report on the Five Mile School Honor Roll was in the Lang Lang Guardian of June 9, 1915. Five Mile, also known as Koo-Wee-Rup North, was a small township on the corner of the Main Drain and Five Mile Road (the road being five miles from the start of the Main Drain at Western Port Bay). The School opened in July 1894 and closed in November 1959 when school became part of Pakenham Consolidated School. Two teachers who had taught at this school were awarded medals for bravery - Frank McNamara a Victoria Cross and William Wilson a Military Cross. You can read about them here.

Who were these soldiers who were honoured? I  have included their Service Number (SN) so you can look up their full record in the National Archives of Australia (www.naa,gov.au)

Backhouse, Bert (Herbert Arthur Burder) (SN 612)  Bert was 23 when he enlisted on April 20, 1914. Bert is listed in the 1913 Electoral Roll at Koo-Wee-Rup. His next of kin on his enlistment paper was his father, Talworth Backhouse, whose address is listed as Metropolitan Board of Works, Melbourne. Bert's mother was Emily A'Beckett, a daughter of W.A.C A'Beckett of The Grange in Harkaway, so they were a well connected family, socially. He Returned to Australia on May 4, 1917 and was discharged on medical grounds (septic knee)

Bjurstrom,  Gustave Carl (SN 503)  I can only find one instance of a Bjurstrom enlisting and it is this one, so even though he is listed in the newspaper article as A. Bjurstrom I believe I have the right soldier.  Gustave was 19 when he enlisted on August 27, 1914 and his occupation was sawmill labourer and his next of kin was his father C.G Bjurstrom of Heyfield. Gustave Returned to Australia July 2, 1915. There are reports in various papers that he was wounded but we don't know the full story as we cannot access his service record as it has been combined with his World War Two record, as Gustave enlisted at the age of 42 in March 1940. His address at the time was Cora Lynn.  In the 1916 Electoral Rolls Charles and Agnes Bjurstrom are listed at Koo-Wee Rup, two years previously they were at Heyfield, so obviously moved after their son enlisted.

Burns, Joseph  (SN 1399)  Joseph enlisted on October 19, 1914 at the age of 33 and then was medically discharged in April 1916 due to receiving a Gun shot wound to the 'lower extremities' while fighting at Gallipoli. He rejoined April 27, 1917 and was discharged again in the May. Joseph was the son of Francis and Margaret Burns who are both listed as the next of kin, with an address in Moreland, however there was a Francis, Margaret and Joseph Burns in the Electoral Roll  at Koo-Wee-Rup from 1903 to 1913.

Chippindall, Robert Arthur (SN 375) Robert was a 23 year old painter when he enlisted on August 15, 1914. His next of kin was his mother, Sarah, of  South Yarra. Robert died of wounds on May 17, 1915.  What was his connection to the Five Mile region? His father was the grandly named Giles Tatlock Chippindall and his mother was Sarah Isaac Dawson. When Giles died at the age of 57 in 1900 his death notice said that he lived at Bunyip and was employed by the Lands Department. Giles had various government positions in Victoria and Queensland  - in 1893 he was appointed as a Crowns Land Bailiff.  I have found the notice below so I presume he was the Lands Department Inspector in the region.  Giles and Sarah had fifteen children altogether and she died in 1932 aged 80. Another son of Giles and Sarah's was Thomas and he is listed in the Electoral Roll in 1908  at Garfield,  his occupation is also Crown Lands Bailiff.  Yet another son, Giles, was the Director General of Post Masters General Department and had also headed the Department of War Organisation of Industry and was knighted in 1950. 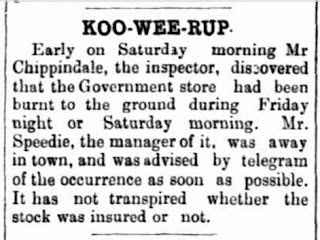 
Denham, Robert Alexander  (SN 392) Robert was born in Koo-Wee-Rup  and was living in Carlton and was  a fireman when he enlisted at the age of 28 on February 17, 1915 (that's the date according to the Embarkation roll and July 17, 1915 is the date according to the Enlistment papers).  His next of kin was his friend Annie Ritchie. Robert Returned to Australia July 10 1916 and was discharged on medical grounds due to a form of rheumatism. Robert was the son of John and Janet Denham. John Denham was the Cranbourne Shire Secretary from 1909 to 1911 and the Rate collector for nine years, he also had a store at Yallock and  a dairy farm at Koo-Wee-Rup. Janet's father, Alexander Dunlop, had the Harewood Mains property at Tooradin and had a successful cheese making business.

Emmott, Robert Edmund  (SN 1083) Edmund enlisted at the age of 19 of September 12, 1914. His next of kin was his mother, no name was given, but later papers show it was Alphina Emmott and she was living at Red Hill.   Edmund was Killed in Action in France on April 15, 1918. There is a letter in his file from the AIF Base Records Office asking Alphina  if her son had 'any nearer blood relations than yourself, for instance, is his father still alive'  - he wasn't, his father Joseph had died in April 1914. Alphina and Joseph were listed in the Electoral Roll at Koo-Wee-Rup from 1903 to 1914.

Jenkins, Thomas Edward   (SN 188)  Thomas was a bricklayer and 19 years old when he enlisted on January 11, 1915. His next of kin was his mother,  Annabel Jenkins, of Boundary Road, Koo-Wee-Rup. Thomas had been born in Koo-Wee-Rup.  He Returned to Australia on April 5 1918 and was discharged in the July on medical grounds due to a Gun shot wound to the right arm, received while fighting in France.

Johnson,  Charles Tudor (SN 588).  Tudor, as he was known, was 19 when he enlisted on November 7, 1914. He was a farmer who lived at Cora Lynn and his next of kin was his mother,  Mrs Fanny (nee Bickford) Johnson, of Cora Lynn. Tudor had attended Dookie Agricultural College before he enlisted at Enoggera in Brisbane. His father was Henry George Johnson who for some reason was not listed as the next of kin, generally fathers are more likely to be the official  next of kin than mothers. Tudor Returned to Australia on December 23, 1918. Tudor is also on the Cora Lynn War Memorial.

Marshall, George  (SN 1780)  George enlisted on January 11, 1915 at the age of 31. He was a carpenter and his address was Cora Lynn and his next of kin was Samuel Marshall who lived at Koo-Wee-Rup (a later paper had the address as Phillips Drain, Five Mile) George sustained two gun shot wounds at Gallipoli -  one to the left side under his arm and one in his left arm. He Returned to Australia on October 13, 1915 and was discharged on medical grounds in January 1916. There is an Statuary Declaration in his file from 1942 saying that he lost his discharge papers in the 1934 flood at Cora Lynn, he was then living at Bullumwaal, north of Bairnsdale.

M'Gregor, Robert  I am unsure who this is, there is a John and Josephine McGregor on the Electoral Roll at Koo-Wee-Rup from 1903 to 1905 so they may have had a son who the attended the school but I don't know. If  you have more information on Robert,  I'd love to hear from you.

Scanlan, Thomas  Patrick (SN 505) Thomas Scanlon - his surname is spelt as both Scanlan and Scanlon on official documents - is  the son of William and Ellen Scanlon of Cora Lynn. Thomas was 21 when he enlisted on January 12, 1915. He was a farmer. Thomas was awarded the Military medal and he Returned to Australia  April 5, 1919.

Watson, Percy I am not sure who this is - my best bet going on enlistment date, enlistment place, birth place and occupation is that it is Percy Kennedy Watson (SN 926) Percy was 29 and  a labourer when he enlisted on December 7, 1914. He Returned to Australia March 11, 1916 and was discharged on medical grounds (Asthma) in the November. Once again, if you can help identify Percy I would love to hear from you.