Many women devoted themselves to the war effort and knitting was one thing they could do whilst still looking after their family and home. In June 1917, Mrs Chirnside of Edrington offered a prize of one pound for the best pair of knitted socks. Winifred Chirnside  was the daughter of Theodatus Sumner and Sarah Peers. Her sister, Alice, was the mother of Lady Casey,  another sister Annie was married to James Grice, brother of Richard Grice, after whom Grice's Road was named  and another sister, Mary, was married to Albert Nash, who owned Ballarto at Cranbourne. Mrs Nash helped establish the Cranbourne Red Cross. The Chirnside family had extensive landholdings including Werribee Park estate and it was Winifred and her husband, Andrew, who owned Edrington, They both died in 1934 and Edrington was left to Lady Casey and her brother, Rupert Ryan and their cousins Noel Sumner Nash and Doris Osborne.  I don't who won the prize for the best knitted socks. 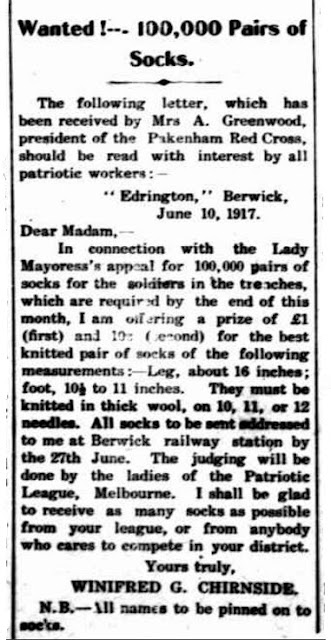