Jack Morris - the Russian Finn of the Bunyip Swamp

It is not uncommon when researching First World War Soldiers to come across men  who enlisted in the Australian Army who were migrants from European countries. For instance, Nils Pederson was born in Norway and working at Cora Lynn when he enlisted. He was Killed in Action on September 1, 1918. Atolf Aleksanter Aalto is listed on the Nar Nar Goon Honour Roll and he was born in Finland.  Atolf  was awarded the Military Medal.

In this post we will look at John Morris (SN 1639) who was born on Odessa in Russia (now in Ukraine)  although when he was naturalized on August 8, 1937, his naturalization papers say he was born in Tobolsk, Siberia.  He has obviously selected an anglicised name - his real name is listed in the records as Alfronzia Morozoff. His next of kin is his mother Lokeria Oshipumna also of Odessa. Jack, as he was called, was a 37 year old bridge carpenter when he enlisted on May 8, 1915. His record said that he had spent seven years in the Russian Army.

The address on the Embarkation Rolls is listed as Scaple Simon, Russian Finn, Bunyip Swamp, Gippsland.  The Bunyip Swamp is the Koo-Wee-Rup Swamp and he no doubt lived at Bunyip (or more likely Bunyip South, the old name for Iona) I presume he was living with Scaple Simon - but was Scaple the Russian Finn or was John? What is a Russian Finn?  Finland was an autonomous Grand Duchy of Russia from 1809 to 1917, so presumably it was a Finnish person who lived in the Russian Grand Duchy.

Jack Returned to Australia September 9, 1915 and was medically discharged on April 12, 1916. What happened to him after that? In 1933 he wrote  a  letter to the Army and his address was Goondiwindi in Queensland, the same address as his naturalization papers in 1936. There is a later letter, from 1955 saying that his three medals had been handed in to the Public Curator in Brisbane and they were forwarded to the Central Army Records Base in Melbourne. By this time he was deceased. The letter, as you can see below, lists his real name. Incidently, the Public Curator is responsible for administration of deceased estates, estates of persons in care or disadvantaged, intestacies and insolvencies according to the Queensland Public Curator Office website. 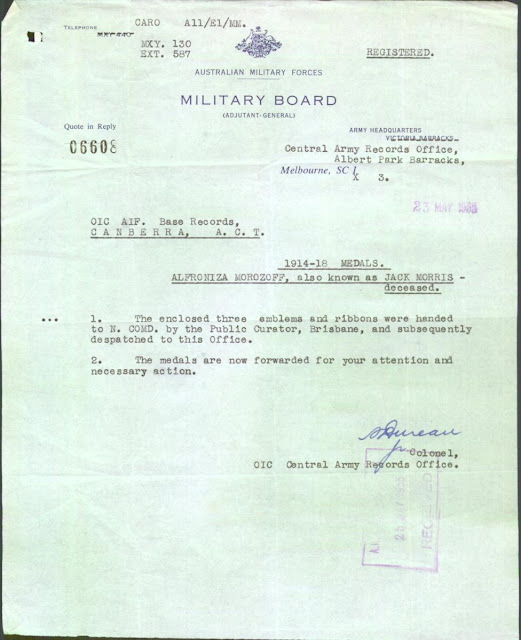 I cannot find a marriage record  for him or a death record for him. I found a Alfronzia Morozoff in the Electoral Roll in 1954 and 1958. The address is Eventide, Sandgate North, a suburb of Brisbane. Eventide sounds like a retirement village or nursing home. In 1954 he would have been 78, an appropriate age for a nursing home. Is this Jack Morris? If so, why is he listed in the Electoral Rolls in 1958 after he had died (according to the letter reproduced above he was dead in 1955). My feeling is that this is our man and he just wasn't taken off the Electoral Roll.

So why wasn't Alfronzia on the Electoral Roll before 1954? This time I looked for Jack Morris and found him in 1928 living at Dirranbandi in Queensland (south of St George) - as his occupation is listed as 'bridge carpenter' the same occupation as Morris' enrolment papers I am sure we have the same man. There are  a few other listings of Jack Morris in the same area (southern Queensland) but none with the same occupation to be able to be sure this is our Jack Morris. This raises another question - why did Jack revert back to his original name in the 1950s?

The next question is who is Scaple Simon and what is his connection to Jack / Alfronzia?  I do not know. I cannot find Scaple on the Electoral Roll, in the Rate Books or any record of his death, so he is  a bit of  a mystery.  If you have any answers to my many questions or mysteries I would love to hear from you.
Posted by Heather at 4:33 AM