Men are needed - What the Women can do

In 1915 there were a series of articles in various local newspapers all throughout the State,  headed 'Recruiting Campaign: men are needed'  One of the articles covered the subject 'What the women can do'  It is an interesting look at the role of women in Society and at their perceived influence in modifying the behaviour of men. It is also very nationalistic, as you might expect. The author was clear that men who were able who hadn't enlisted were not doing their duty, they were 'skulking poltroons'  (a word I had never come across before, it means 'an abject or contemptible coward') but on the other hand he couldn't give the impression that all Australian men were like this as the virile Australian character discounts any such suspicion.For your interest, the article is transcribed, below.  You can see the original in the Berwick Shire News of July 28, 1915, here. 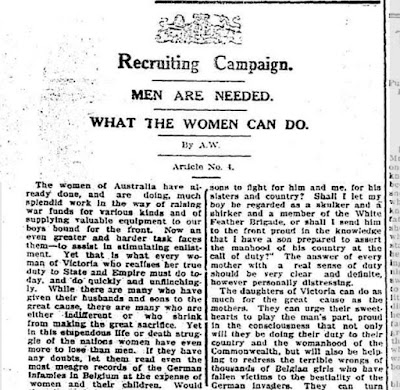 Recruiting Campaign
MEN ARE NEEDED
WHAT THE WOMEN CAN DO
By A.W
Article no. 4

The women of Australia have already done, and are doing, much splendid work in the way of raising war funds for various kinds and of supplying valuable equipment to our boys' bound for the front. Now even greater and harder task faces them - to assist in stimulating enlistment. Yet that is what every woman of Victoria who realises her true duty to State and Empire must do today and do`quickly and unflinchingly.

While there are many who have given their husbands and sons to the great cause, there are many who are either indifferent or who shrink from making the great sacrifice. Yet in this stupendous life or death struggle of the nations women have even more to lose than men. If they have any doubts, let them read even the most meagre records of the German Infamies In Belgium at the expense of women and their children.

Would they keep their sons at home under pretence that it will be time enough to fight the German hordes when they reach Australia? Then it will be too late, because before that can happen Great Britain will have perished as a nation, and the Commonwealth will surely come under the German heel - the women of Australia, in such an event, will be the greatest sufferers.

Yet the arguments some of our women are using are similar to those we are told some British women are using - that it will be time for their  sons to fight when the foe lands in England. They are apparently nursing the belief that the British Fleet will ever prevent any such result. But in war the unexpected is likely to happen at any time and some sudden disaster might give Germany at least temporary command of the seas, during which time she could work incalculable harm.

The women of Australia can serve as our most effective recruiting agents it they will. Their words can turn the path of duty many a shirker who would be deaf to all other argument or appeal. Many young men well fitted to serve are hanging back irresolute and doubtful and the women only can influence them for noble strife or ignoble peace. What every mother who has a son or sons fit to bear a rifle should ask herself is 'Shall I keep him at home while other mothers send their sons to fight for him and me, for his sisters and country? Shall I let my boy he regarded as a skulker and a shirker and a member of the White Feather Brigade or shall I send him to the front proud in the knowledge that I have a son prepared to assert the manhood of his country at the call of duty?' The answer of every mother with a real sense of duty should be very clear and definite, however personally distressing.

The daughters of Victoria can do as much for the great cause as the mothers. They can urge their sweet hearts to play the man's part,  proud in the consciousness that not only will they be doing their duty to their country and the womanhood of the Commonwealth but will also be helping to redress the terrible wrongs of thousands of Belgian girls who have fallen victims to the bestiality of the German Invaders. They can turn contemptuously from all unmarried, shirkers of military age who refuse to respond to their country's call. They would do well to remember that such men would be poor protectors for women in any time of trouble, and that any high-spirited girl would disgrace herself by marriage with a skulking poltroon.

This war will give our women a much clearer idea of the character of the young men of the Commonwealth. It will enable them to discriminate between the real men with whom our girls might be found to associate and the poor creatures who are hanging back in the rear. At the same time we cannot believe there are many of the latter - the virile Australian character discounts any such suspicion. There are, however, many who want a lead simply  because they do not realise the true condition of things. It is for the women of the State to help them to do so to see things in their true light and point out clearly for them the road of duty. We venture to believe the majority of them, however backward and slothful, will respond readily when they know what is really expected of them.

Women's persuasion in this great cause is worth more than men's arguments - if they will only employ it.  It is their duty to do so, as it is the duty of the young men to answer the Empire's call - to give the only answer men should give to women's call in the hour of danger.
Posted by Heather at 10:00 PM

Email ThisBlogThis!Share to TwitterShare to FacebookShare to Pinterest
Labels: Recruitment, Role of Women