A Memorial stone to the Great War personnel was unveiled at Harkaway on Anzac Day in 1959, by Cr George Rae. The stone is at the southern end of the Harkaway Avenue of Honour and was instigated by Army Nurse, Jessie Traill, who wanted a permanent memorial stone.  Over 100 people were in attendance to see the stone unveiled including two of the soldiers, Alf Edmonson, who was living in Cheltenham,  and Alex McNabb,  who was living in Berwick. (Information from  Early Days of Berwick)  The Avenue was planed in 1919 and consisted of 29 Red Flowering Gums (Eucalyptus ficifolia).  This post is a list of the names on the Memorial stone, including their Service Number (SN) so you can read their full record on the National Archives of Australia website, www.naa.gov.au 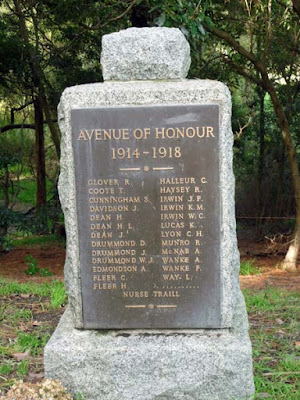 This is the Harkaway Memorial Stone.
Photograph courtesy of Casey Cardinia Remembers http://www.caseycardiniaremembers.org.au/

Traill, Jessie  When the War broke out, Jessie want to England and joined the Voluntary Aid Detachment and nursed in a military hospital in Rouen, France from 1915 until 1919. After the War, she lived in Harkaway and had a distinguished career as an artist. You can read my blog post on her here and her entry in the Australian Dictionary of Biography here.

Coote, Thomas Hugh (SN 4999) Thomas was born in Ireland and enlisted on January 13, 1916 at the age of 19. He was a farmer and his next of kin was his father, James, of Harkaway. Thomas was Wounded in Action in April 1918 (gun shot wound in left shoulder, penetrating chest was the bland description in his file) and Returned to Australia July 31, 1918 and was discharged on medical grounds on November 16, 1918. Thomas was granted  a Soldier Settlement farm at Rapanyup on his return. You can read about it here on the Battle to Farm: WW1 Soldier Settlement Records in Victoria website.

Cunningham, S - There is an S. Cunningham on the Memorial Stone, I am not sure who this is. It is possibly  Claude Sydney Cunningham (SN 1246) Claude was a 24 year old farmer and his next of kin was his mother, Emma, of Narre Warren sometimes listed as Narre Warren East. He enlisted on March 18, 1916 and Returned to Australia April 30, 1919.
The blog Noble Sons: Harkaway in the Great War suggests that S. Cunningham is Selwyn Bruce Cunningham (SN 7471) Selwyn enlisted on July 2, 1917 at the age of 19. He was  a farmer and his next of kin was his father, Reverend William Richard Cunningham, of The Manse, Korumburra. Selwyn Returned to Australia January 14, 1919. What is Selwyn's connection to Harkaway? There is a report in the South Bourke and Mornington Journal in July 1920 that the Reverend Cunningham had purchased a property in Harkaway. A report in the Dandenong Advertiser of March 18 1937 on the 80th anniversary of the Berwick Presbyterian Church said that William was the Minister there from 1921 to 1925 and William and his wife Amy are listed  in the Electoral Rolls at Berwick in 1924.

Davidson, J  There is a J. Davidson listed on the Memorial Stone. We know that he had  a farewell at the Harkway Hall in August 1915, at the same time as  Robert Munro, Robert Haysey and one of the Fleer brothers (see article below under Robert Munro's entry) and we also know that he was sick in August 1915 (see article immediatley below). What I don't know is who he actually is. I can't find a J.W Davidson with a connection to Harkaway or any neighbouring area. If you know who is he, then I would love to hear from you.


Dean, Henry (SN 5585)  Henry enlisted at the age of 29 on February 26, 1916. He was a labourer and his next of kin was his father, Thomas, of Harkaway. In August 1918 he was wounded by machine gun fire - a gun shot wound to the left wrist, smashing several carpal bones and another gun shot wound to the buttock, penetrating the thigh - once again the bland description does not give any indication of the horror of the wound.  Henry Returned to Australia on November 20, 1918.
Dean, Herbert Leslie (SN 570)  Herbert was 23, a labourer, when he enlisted on February 22, 1916. His next of kin was his mother, Sarah Dean of Harkaway. Lance Corporal Dean Returned to Australia on January 25, 1919.

Drummond, J  There is also a J. Drummond on the Memorial stone - not sure who he is. Daniel and William, also had another brother, Walter Neil Drummond (SN 2571) who enlisted at the age of 18 on June 28, 1915. He was a Blacksmith and had been born in Eskdale. His next of kin was listed as his father, William, of Officer. I presume that William and Margaret moved from Officer to Harkaway in 1916. Walter Returned to Australia April 13, 1919.

Fleer, Cyril August (SN 6263) Cyril was an 18 year old farm hand when he enlisted on May 5, 1916. His next of kin was his mother, Martha, of Harkaway.  Cyril suffered from trench feet, a condition caused by prolonged exposure to water in the trenches which led to swollen feet, blisters, ulcers and even gangrene. He Returned to Australia on April 5 1918.
Fleer, Harold Edward (SN 3112) Harold was Cyril's brother he was also 18 when he enlisted on July 12, 1915. His next of kin was his father Edward of Harkaway and both Edward and Martha gave consent for their son to sign up.  Harold Returned to Australia on April 13, 1919.
Cyril and Harold were descendants of German born pioneer, Carl Fleer, you can read more about him and the other German settlers at Harkaway, here.

Glover, Francis Robert Dean (SN 50059)  Francis enlisted on November 24, 1917. He was 19 and his  occupation was listed as Station hand and his next of kin was his uncle, George Lyon, of Harkaway. There is a letter in his file, from his mother, Edith Glover, who lived in Sydney asking why she was not listed as his next of kin. George Lyon had signed a paper saying that Francis was adopted by him when he was a child and that Francis' father was dead. Francis is the first cousin of Charles Lyon listed below. He served in France and Returned to Australia January 18, 1919. Correspondence in his file showed that in 1938 he was the Station Manager at Carriewerloo Station in Port Augusta, a long way from the rolling hills of Harkaway. As a matter of interest, Carriewerloo Station was where the 1975 film, Sunday too far away, starring Jack Thompson, was filmed.

Halleur, Clarence (SN 1026)  Clarence was 18 years old and a labourer when he enlisted on March 8, 1915. He was born in Harkaway and his next of kin was his mother, Christina of Harkaway. He Returned to Australia April 27, 1919. Clarence was a descendant of the early Harkaway pioneer, Rudolf Halleur, you can read about him here.

Irwin, James Purser (SN 5035)
Irwin, Horace Mark (SN 967)
Irwin,  Walter Gray (SN 968)
I have done a post on the Irwin brothers in this blog before, part of a series of Brothers who enlisted, you can read about them here.

Lyon, Charles Hugh (SN 412) Charles was the first cousin of Francis Glover, listed above. His  next of kin was his father, George, of Harkaway. He enlisted at the age of 26 on October 13, 1914 in Walebung in Western Australia. Lieutenant Lyon was Killed in Action in Palestine on November 7, 1917.  Charles' mother, Kate, wrote a letter to the Army on December 1, 1917  Lieutenant C.H Lyon is our  only son. The news of his being 'Killed in Action' came direct to me, according  to our dear sons own wish his father being over 70 we did not want him to hear the news unawares. Is it possible for us to ascertain where in Palestine he was killed?  We regret the  country has lost another  of its brave defenders but his place is already filled by our young nephew and adopted son who enlisted last week and hopes to be as true a soldier as his cousin has been since the beginning of the War.
Charles attended Geelong College and they have  a tribute to him on their website, you can access it here.

Munro, Robert (SN 6542, incorrectly listed as 65421 in the National Archives) Robert's occupation was Quarrry man  and he served as a Sapper, a military engineer, who constructed bridges, trenches, depots, roads etc.  He was 25 when he enlisted on June 5, 1915 and his next of kin was his wife, Ettie, of Berwick. Lance Corporal Munro Returned to Australia April 13, 1919. 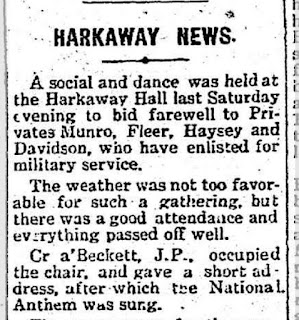 The farewell to Robert Munro, Robert Haysey, J Davidson and either Cyril or Harold Fleer was held at the Harkaway Hall on Saturday, August 14, 1915.
This report was in the Berwick Shire News of August 18, 1915. You can read the full article at http://nla.gov.au/nla.news-article92090128


Wanke, Arthur Robert (SN 1427)  Arthur enlisted on March 11, 1916, he was a 27 year old carpenter. Arthur was Wounded in Action on three occasions - Gun shot wound left thigh, Gun shot wound hand and Gun shot wound right leg - as I have said before, the banal description of the wounds does nothing to indicate the severity of them.  He Returned to Australia December 12, 1918.
Wanke, Frederick William  (SN 6379)   Frederick enlisted on April 28, 1916, he was a 26 year old farmer. Frederick Died of Wounds, whilst  fighting in France on May 17, 1918.
Arthur and Fredrick were the sons of Emmanuel and Bertha  Wanke of Harkaway. Emmanuel (also spelt Immanuel) was the son of Ernst Gottlob Wanke and his wife Pauline (nee Schurmann) who settled in Harkaway in 1853. Bertha Wanke was an Aursich, and thus from another pioneering German Harkaway family. You can read more about these early German settlers, here.

Part of a tribute to Fred Wanke from the Dandenong Advertiser of July 4, 1918.
You can read the full tribute at http://nla.gov.au/nla.news-article88817395


Way, Leslie Gordon (SN 4547) Leslie enlisted on January 20, 1916, he was a 23 year old farmer and his next of kin was his father, Edward, of Harkaway. Leslie was gassed on two occasions and he Returned to Australia on March 31, 1919. Leslie was granted a Soldier Settlement farm at Derrinallum, you can read his file here on the Battle to Farm website.