The establishment of some local Red Cross units

During the Great War, many of the women in the local community spent their time raising funds and working for the War Effort through organisations such as the Red Cross.  The Cranbourne Red Cross was established at  a meeting held on August 17 1914. The South Bourke and Mornington Journal of August 27 1914 reported on this meeting A meeting of the ladies of Cranbourne was convened by Mrs A. Nash...and it was decided to work for the Red Cross Society.  Mrs Nash had already collected 20 pounds in monetary donations and most of this had been spent on material that her 60 to 70 enthusiastic workers would make up into shirts and socks etc. The items were then forwarded to Red Cross Headquarters in Melbourne where they were shipped off  to the seat of war where they will be used for the benefit of Australian, British and troops of the allies. You can read the full article on Trove,  here.

Mrs A. Nash was Mary Maud Nash wife of Albert, who owned the grazing property Ballarto at Cranbourne. Maud was well connected. She was the daughter of  Theodotus Sumner and his wife Sarah (nee Peers). Her sister Annie was married to James Grice, who was the brother of Richard Grice, land owner in Berwick and Cranbourne, after whom Grice's Road is named - you can read about him here and another sister, Alice, married Charles Ryan - they were the parents of Lady Casey who owned Edrington at Berwick - you can read about Lady Casey here. In spite of being socially well connected it doesn't seem like it was  'happy families' all the time as there was a family dispute over Theodotus Sumner's will - you can read about this here.

Back to the Red Cross - the Berwick Red Cross was also established by the women who were socially prominent (or their husbands or fathers were).  I am not denigrating them at all by saying that, but the reality of life was that at the time, women who came from solid middle class households would likely to have had a good education, have good connections in the town and more spare time to devote to community causes than poorer women. The early records of the Berwick Red Cross were destroyed in a house fire, but I believe it started around September 1914 and it is still going, which is  a remarkable achievement. The Berwick Shire News has a report of the Berwick Shire Council meeting of  September 12 1914 and amongst the correspondence was a letter from Lady Stanley asking for the co-operation of the Council in forming a branch of the British Red Cross Society. The action was listed as 'Attended to'  [Lady Stanley was the wife of the Victorian Governor]

The original members of the Berwick Red Cross (pictured below in front of Kippenross House) were President Mrs Scott Sharp, Secretary Mrs A.E Thomas, Mrs L.D Beaumont, Mrs W. Wilson, Mrs C. Griffiths, Mrs J.B Pearson and Mrs John Brown. As is quite common in reporting from times past women were referred to by their husband's names - Scott Alexander Sharp is listed in the Electoral Rolls as a grazier and his wife is Beatrice May (nee Wimble); Mrs A.E Thomas is the wife of Albert Thomas the founder of the Berwick Shire News which later became the Pakenham Gazette, she was born Elizabeth Cox Southern.  Mrs Lewellyn David Beaumont was Ellie Buchanan, daughter of the Hon. James Buchanan, M.L.C. and his wife Anne (nee Wilson) The Buchanans lived at Ardblair in Berwick and their son Norman was one of the authors of Early Days of Berwick. He writes about his parents in the book.  Mrs W. Wilson was the wife of William Wilson (1860-1936) the owner of the Wilson Quarry. She was Anne Buchanan, a sister of Ellie Beaumont. Mrs C. Griffiths was the wife of Dr Christopher Griffiths and was born Annie Lawry Parkes. Mrs J.B Pearson was the wife of  John Benward Pearson, a grazier, who built Kippenross House  (now part of St Margarets School) in 1911. She was born Olive Gooch and married John, who was the son of William Pearson, M.L.C., in November 1895. Finally Mrs John Brown was the wife of the Berwick Shire Rate Collector. I believe she was Frances Elizabeth Barr, but that's all I know about her. 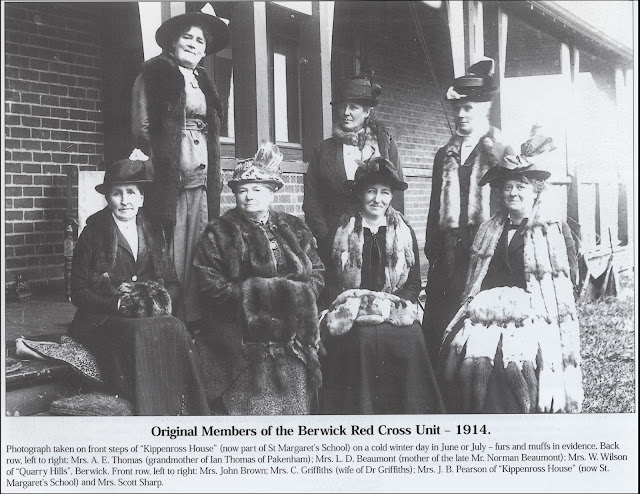 This fantastic photograph of the original seven members of the Berwick Red Cross comes from the book Berwick Nostalgia:  a pictorial history of Berwick, published by the Berwick-Pakenham Historical Society in 2001.


The Pakenham Red Cross was formed at a  meeting held on November 26, 1915. You can read the report on the South Bourke and Mornington Journal of December 9, 1915 here. The meeting was convened by Cr Close who started the meeting by saying that all the other townships in the Shire of Berwick had their Red Cross branches and it was time for Pakenham to fall into line and do what it could, as a town, to help those who are so nobly serving their King and Country at the Front. Office bearers were Mrs Greenwood, President; Mrs Wilson, Secretary and Miss Cissie Hagens, Treasurer. The Committee were Mesdames Close, Chisholm, Maher, Ritchie, White and the Misses Thewlis and Mulcahey.

Once again I will try to give these women a name - Cr Close and Mrs Close were William and Agnes, he was a grazier. Mrs Alice Greenwood was the wife of Auctioneer, Arthur Greenwood. I don't know who Mrs Wilson was and Cissie Hagens may be the sister of Marie and Louise Hagens, both listed in the 1914 Electoral rolls as being teachers, or else Cissie might be her nick name and she may actually be either Marie or Louise. Mrs Chisholm is presumably Alice Chisholm, wife of James, a grazier. Mrs Maher is possibly Bridget Maher, the wife of local policeman, Stephen. The Mahers had three sons serving overseas - you can read about them here. Mrs Ritchie may be Elizabeth Ritchie, wife of William. I don't have any information on Mrs White. Miss Thewlis would be the daughter of James and Susannah Thewlis and the sister of Syd Thewlis, who was a Berwick Shire Councillor. Miss Mulcahey  (more likely spelt Mulcahy)  would be connected to early Pakenham landowner, Thomas Mulcahy.


The Koo-Wee-Rup Red Cross was formed on July 7, 1915. It is still going and you can read a history of the Unit, written by long serving member Don Jewell,  here. 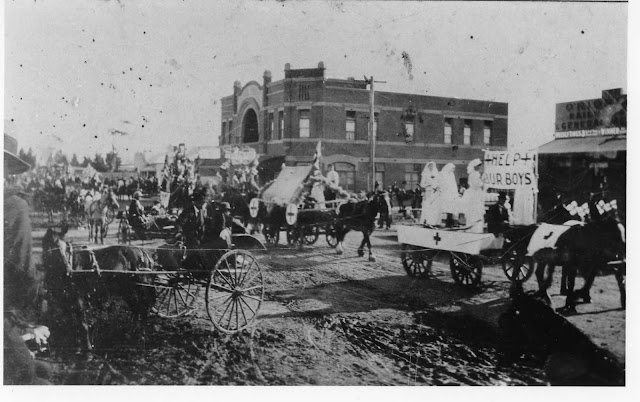 This is a Red Cross Rally in Koo-Wee-Rup, in front of the Royal Hotel which opened September 1915, so this is probably 1916 or 1917.
Photo: Koo-Wee-Rup Swamp Historical Society

I don't know when the Lang Lang Red Cross was established specifically but it was going strong in September 1915. There is an interesting article in the Lang Lang Guardian of September 15, 1915 about the activities of this branch - they are anxious to send Christmas cheer to our boys  and would be glad of donations of tobacco, tooth brushes, bought puddings (as these pack better), cake, biscuits, lollies, and games of any kind, handkerchiefs, or small presents for the boys of whom we are all so
proud.  They also wanted to fill some billies and send them to the soldiers with something to eat, something to smoke, something to use and something to amuse.