Celebrating the Armistice at Nar Nar Goon in 1918 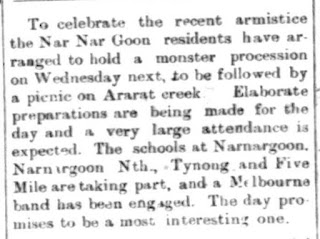 The following week's edition (December 6)  had  a full report of the activities. The article is on-line on Trove and you can access the article here and I have provided a transcription, below. The day was highly successful with over 1,000 people attending the event, a huge amount of people, nearly everyone in the district must have attended. 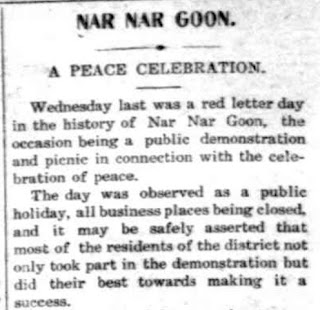 NAR NAR GOON
A PEACE CELEBRATION
Wednesday last was a red letter day in the history of Nar Nar Goon, the occasion being a public demonstration  and picnic in connection with the celebration of peace.

The day was observed as a public holiday, all business places being closed, and it may be safely asserted that most of the residents of the district not only took part in the demonstration but did their best towards making it a success.

About a fortnight ago the towns people decided that it was desirable that something should be done to mark their appreciation of the glad news that an armistice had been declared and that there was every indication of an early and lasting peace. An appeal was made for funds to meet the expenses of the celebration, and this met with a most generous response, about £50 being raised.

Wednesday's event was a credit to the town and district, and it will always be looked back upon with interest. Both young and old entered into the spirit of the day, and as a result everything worked smoothly and all had an enjoyable outing.

The day's proceedings opened with a monster procession, which completely eclipsed anything of the kind ever seen in the district, comprising 130 vehicles and numerous horsemen. A number of the vehicles, including buggies, jinkers and lorries, were nicely decorated with greenery and flowers, and there was a profusion of flags, all the Allies being represented.

An effigy of the Kaiser, the handiwork of Mr Mappin, of Tynong, was mounted on a horse. This was safe guarded by Master J. Ede, in the character of ‘ John Bull’,  and was a special attraction.

Space will not permit of a description of the various vehicles, but it may be said that all were  attractive, those of Mr E. Oram, representing ‘The Day’ and Mr J. Spencer, representing ‘Peace’ being worthy of special mention.

The procession was formed into line at about 11 o'clock, and, headed by the Richmond Juvenile Brass Band, marched from the township to the place chosen for the day's picnic.

There were about 1,000 persons on the ground, and a sports programme was carried through, providing plenty of enjoyment for young and old.  A merry-go-round was provided for the children.

Thanks to the excellent management of the committee and the cordial cooperation of all present, the celebrations throughout were a decided success.