This is another post about Brothers who enlisted - these are the Irwin Brothers of Harkaway. They were all born in Carlton to David Gray Irwin and Hannah Purser, who married in 1894. David and Hannah were farming at Harkaway but in 1918 moved to the suburbs (St Kilda, Caulfield areas) and he became a tramway employee, according to the Electoral Rolls. David died in 1928 aged 65 and Hannah died in 1934. 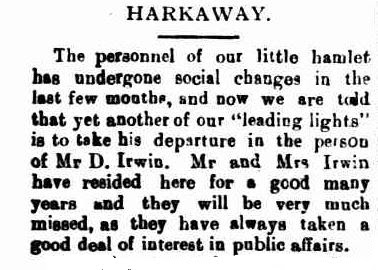 Irwin, James Purser (SN 5035) James enlisted on January 20 1916 at the age of 20. He was a warehouseman. James served in France but  Returned to Australia on  August 27, 1917 and was medically discharged in January 1918 - he suffered from Psoriasis. In 1918 he married Daphne Idina (known as Ida) Mickle and they are  listed in the Electoral Rolls as living at Brighton for twenty years and then various other Melbourne suburbs, he was a Clerk.  James died in 1986. James' dairy recording his experiences in the War is held at the State Library of New South Wales and can be accessed here. He donated the diary to the Library in 1920. The Trustees of the Mitchell Library (as the State Library of N.S.W is known) started the Soldiers' Diaries Collection in 1918 - we are fortunate that they had the foresight to start this collection when many soldiers were still in possession of their diaries..

Irwin, Walter Gray (SN 968)  Walter enlisted on March 3 1915 at the age of 18 years and 7 months. He was  a farmer. Walter served at Gallipoli and Returned to Australia  February 8, 1916 and was discharged on medical grounds in the July of the same year. He suffered from 'Neurasthenia' which is now described as an obsolete term to cover lassitude, inability to concentrate, mental and or physical fatigue. Walter married Lena Petersen in 1918 and died in 1968. Walter and Lena lived in Bendigo and Tatura then in the mid 1930s moved back to Melbourne to Oakleigh. Walter was a 'traveller' or salesman.


A 'complimentary social' was held at Harkaway on July 8, 1916, with over 200 people present, to honour new recruits and also to welcome home Private Walter Irwin.

I can't quite work out the ages of Horace and Walter - according to the ages on their enlistment papers they were born two months apart which is clearly unlikely and the  Index to the Births, Deaths and Marriages says that Walter was born 1897 and Mark in 1896, so there was possibly  a mistake on the enlistment papers - if anyone knows the answer to this, I would love to find out.