Lambis Engelzos and the lost soldiers of Fromelles

Yesterday I attended the Korumburra Historical Society 50th anniversary celebration where Lambis Engelzos, AM, was the guest speaker. Lambis was one of a team of  amateur (in the sense of being unpaid, nothing to do with the excellent standard of their work) historians who discovered the mass grave site of 250 Australian soldiers who were 'missing' after the Battle of Fromelles in 1916. It's  a fascinating story and Lambis is a fantastic speaker.  You can read about the discovery and the subsequent reburial of the these soldiers in the Pheasant Wood Military Cemetery here and about his quest here.

Anyway, amongst the many interesting things that Lambis said was that there were around 60,000 soldiers who died whilst serving in the AIF but around the same number died in the 15 years after the War, due no doubt to the trauma (both physical and mental) that they suffered during the War. Many of the returned soldiers are lying in unmarked graves in cemeteries around Australia and like the Fromelles soldiers they also deserve recognition.  This made me wonder about my own great uncles and where they are buried - I'll have to find out*. I'm not saying that we should all go out and place  elaborate head stone on these graves, but it did make me think about how we are honoring and recognizing these returned soldiers (and the returned military personnel from later wars)

Lambis spoke at the Koo-Wee-Rup Swamp Historical Society last year, so this is the second time that I have heard him speak and if you ever get the opportunity then go along and hear him. Tim Whitford, was part of the same team as Lambis, who discovered the Fromelles grave site - I have also heard him talk, at the Warragul RSL,  and he is equally interesting,  as his great uncle, Private Harry Willis, from Alberton was amongst the missing soldiers. Harry was indentified by DNA supplied by his niece, Marjory Whitford, who is Tim's aunty. In fact, 150 of the 'missing' soldiers have been positively indentified through DNA and other means. You can read about  Harry Willis here  and listen to podcast of a talk Tim did at the State Library of Victoria during Family History Feast in 2013. 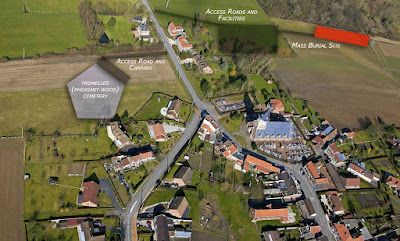 Aerial photograph showing the site of the mass grave beside Pheasant Wood, the northern end of the village of Fromelles, and the site of the Fromelles (Pheasant Wood) Military Cemetery. The mass burial site, its access roads and facilities are shown to the right (eastern side) off the central road leaving Fromelles (the D22). The location of the cemetery site, its access road and carpark are marked on the left (western side) of the D22. [Australian Army]  From http://www.ww1westernfront.gov.au/fromelles/pheasant-wood.php#

*I have found out where they are buried and one of them Alf Weatherhead, who died in May 1976, is for some reason buried at Kangaroo Ground Cemetery even though we have no family connection to the area. His grave is unmarked so that's our project, to get a headstone on his grave, so I'll keep you posted. (19/9/2016)