In this post, in our series of Brother who enlisted, we are looking at the Carter Brothers of Bunyip. You can read about the Cullen Brothers of Cockatoo here and the Maher Brothers of Pakenham, here.

William, Alfred and Frederick were the sons of William and Annie Carter (nee Saunders)  of Maidstone House in Bunyip. The Brothers came from Maidstone in  Kent in England, hence the name of their property in Bunyip. William had already died when the brothers enlisted as their next of kin was their mother. Annie died in 1924 aged 61 in Carlton. I believe there were at least two other children, George who died in 1962 aged 60 and the grandly named Victoria Georgina Augusta who was only 22 when she died in 1919 in South Melbourne. 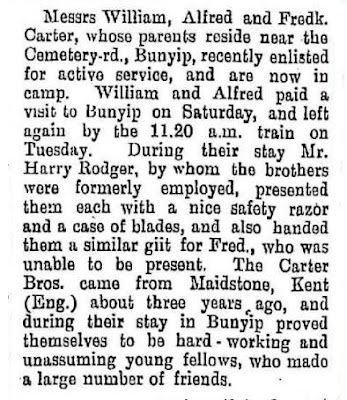 Carter, Frederick Arthur (SN 1397)  Frederick, who was a baker,  enlisted at the age of 20 on July 28 1915. He did his training, was sent overseas to Egypt  and Returned to Australia on May 21, 1916 for discharge due to 'defective vision in right eye'  In the 1919 Electoral Roll, Frederick is living in Carlton, but not sure of what happened to him after that.

Carter, William (SN 2266) William enlisted on July 17 1915  - he was a 28 year old Labourer. William Died of Wounds received while fighting in France on August 6, 1916. William is listed on the Bunyip War Memorial.