This post lists the Great War soldiers who have  a connection to Modella. It's  a work in progress, so if you know of any soldiers who should be included on this list, then please let me know. I have listed the  Service Number (SN) so you can look up each soldier's full service record on the National Archives website (www.naa.gov.au) 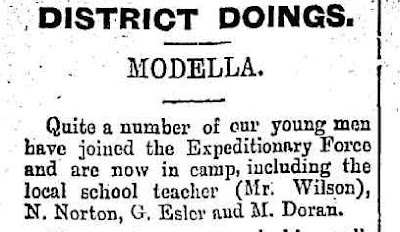 
Chambers, Michael James (Jim) (SN 64173)    Jim had enlisted on  March 6 1918 at the age of 38. He lived in Modella and had a wife, Labela, and three children. Jim Returned to Australia on July 26, 1919 and on October 11 1919 a 'welcome home' was provided for him* Jim had also served in the Boer War in the 5th Victorian Mounted Rifles for 18 months. Their son, Ronald, was the Shire of Berwick Engineer from 1948 until 1973, and then the Shire of Pakenham Engineer until 1977. The family are the source of the name Chambers Road, Modella. The R.J. Chambers Reserve in Pakenham Upper is named for Ronald.

Corbin, William Osment  (SN 5114) William was 19 years old when he enlisted on February 11, 1916. He was a farmer and his next of kin was his father, William, of Modella. Lance Corporal Corbin Returned to Australia May 20 1919. After the War, William took up a soldier settlement farm at Caldermeade - you can see his file on the Battle to Farm website here

Doran, Matthew John (SN 1376)   M. Doran is listed in the newspaper article, above, and I believe it is Matthew Doran although I can find no specific connection to Modella, however he did have his medical examination at Warragul, prior to his enlistment on August 3, 1915, so I believe I have the correct M. Doran.  Matthew was a 29 year old labourer when he enlisted and his next of kin was his mother, Mary Scanlon, of Heathcote. Matthew was Killed in Action on October 23, 1916 in France,

Esler, Gordon  (SN 534) Gordon was 30 when he enlisted on July 8, 1915. He was a 30 year farmer from Modella and his next of kin was his mother, Mrs Helen Smethurst of Yannathan. Helen died in November 1916 and his brother, Hugh, who was a Policeman, then became his next of kin. Gordon Returned to Australia April 13, 1919 and was granted a Soldier Settler farm in the Parish of Tongala, you can read about this here.

Hughes, Ephraim  (SN 11763) Ephraim enlisted at the age of 31 on September 7, 1915. His next of kin was his father, Robert, of Modella. Ephraim Returned to Australia April 20, 1919 and was granted a soldier settlement farm of 77 acres at Modella (off Bridge Road, Allotment 93, Parish of Yannathan) You can read about this farm  here

Lugton, John Archibald  (SN 3193) Arch enlisted on October 19, 1916 at the age of 27. He was a farmer and his next of kin was his father, Charles, of Northcote. Arch received  a gun shot wound to the chest on August 8, 1918, whilst fighting in France, and died the next day.  A Memorial service was held at the Modella School in memory of Arch*

Marchant, John (SN 897) John was a blacksmith and he was 24 when he enlisted on August 21, 1914. His next of kin was his wife, Mrs J Marchant, of Modella. John had a bit of mixed military record, and was absent without permission on a few occasion which meant that a form had to be filled out, and on two occasions this paperwork had his 'General character' listed as 'Bad'. I'm sure he wasn't bad - perhaps just not suited to Army life. John Returned to Australia March 3 1916 and was discharged on medical grounds on May 14 due to 'leucoma right eye' - which is a dense, white opacity of the cornea due to an injury. 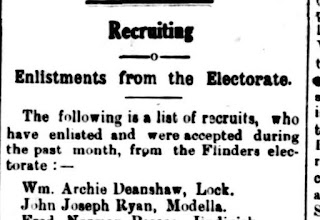 Ryan, John Joseph     As we can see from the newspaper article, above, a John Joseph Ryan from Modella enlisted in August or September 1918 - I can't find  a record for him on the National Archives of Australia website, so I have no other details.

Warren, George William  (SN 6716) George was 32 and  a farmer when he enlisted on January 11, 1917 at the age of 32. His next of kin was his father, also called George Warren, of Modella. George served in France and  Returned to Australia on February 7, 1919. George was granted a Soldier Settler farm in Mildura, you can read about this here.

Wilson, Joseph Daniel (SN 1869)  Joseph was born in Northern Ireland and was 26 years old and the teacher at Modella State School when he enlisted on September 11, 1915.  Joseph was awarded the Military Medal and he Returned to Australia on June 20, 1919.

Email ThisBlogThis!Share to TwitterShare to FacebookShare to Pinterest
Labels: Modella