The Weekly Times published this article on August 4, 1917 and is interesting as it shows the connection at the time between  patriotism, colonialism and nationalism. Kenneth Thompson Grant Fyffe (Service Number 6798A) enlisted on September 3 1917, at the age of 21 and had been employed as a Farm Labourer at Bunyip. Kenneth was gassed while serving overseas in France. He Returned to Australia February 26 1920.

In the 1921 Electoral Roll Kenneth was living in North Fitzroy and had an occupation of 'Engine Cleaner' and three years later he was living at Brighton Avenue in Preston, with his wife Amelia, and he was a tram conductor. You can read more about Kenneth on the RSL Virtual War Memorial rslvirtualwarmemorial.org.au or click here to go directly to his entry. Sadly, his life after the war was not all smooth sailing and he died in 1964 at the age of 68. I wonder of he ever returned to Bunyip? 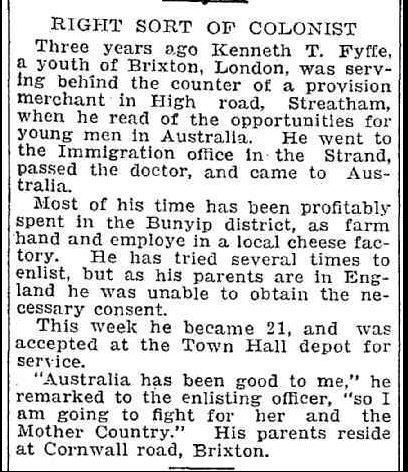