The Cranbourne Presbyterian Church Honour Roll is housed at the Fishermans Cottage Museum at Tooradin. The Museum is operated by the Cranbourne Shire Historical Society. It's a beautiful board, in a Gothic ecclesiastical style.  What follows is a list of soldiers on the Honour Board,  their fate (i.e. when they Returned to Australia after active service or when they were Killed in Action) and their Service Number (SN) so you can look up their full service record on the National Archives website (www.naa.gov.au) 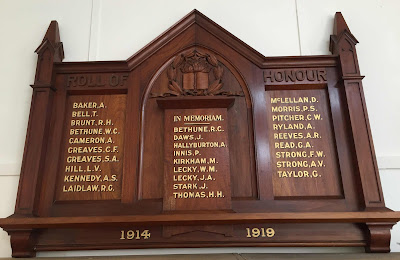 The T. Bell listed on the Honour Roll is either Thomas Bell (SN 340) or Thomas Bell (SN 3773) They are both Presbyterian.
Bell, Thomas  (SN 340)  Thomas was one month off 25 years of age when he enlisted on January 18, 1915. His next of kin was his father, J. Bell of Cranbourne and his occupation was farm labourer. Thomas Returned to Australia January 2, 1919.
Bell, Thomas Stanley (SN 3773)  Thomas enlisted on August 12, 1915 aged 23. His next of kin was his mother, Mary Ann Bell of St Germains, Clyde. Thomas Returned to Australia October 18, 1917 and was discharged on medical grounds on January 21, 1918. In June 1917 he had been wounded - 'Gun shot wound chest penetrating' was the description of the wound.

Brunt, Robert Harold  (SN 26769) Robert is the son of  William Brunt and  Mary Jane (nee Espie), who lived at Spring Villa, where the Settlement Hotel is now located. William was a Cranbourne Shire Councillor from 1904 to 1923. Robert enlisted on February 26, 1916 aged 27 and Returned to Australia on May 31, 1919. Brunt Street in Cranbourne is named for the family.

Cameron, Alexander Gordon (SN 1688) Alexander enlisted on June 28, 1915 at the age of 23. His next of kin was his mother, Mary Ann Cameron of Heatherleigh in Cranbourne. Alexander Returned to Australia May 15, 1919. Alexander's father was Ewen (1860 to 1903) and his mother Mary Ann (1859 to 1947)  was also a Cameron and she was the daughter of early Cranbourne pioneer, Alexander Cameron ( 1814 to 1881) who took up the Mayune run in 1851 and purchased the pre-emptive right of the property which he re-named Mayfield; he was also a member of the Cranbourne Road Board from 1863 until 1867. Cameron Street in Cranbourne is named for the family.

Hill, Leslie Victor (SN 64207) Leslie first enlisted on November 27, 1917 - claimed he  was 18 and his next of kin was his father, Leslie of Nilma, this was,of course, all lies. His father sent  a stern letter asking how it is that the military authorities have taken him in as he was not only underage but didn't have his parent's permission. He was discharged on March 14, 1918 because  he was underage, but then he re-enlisted less than two moths later, on May 1.  This time he truthfully said that his father was Samuel Hill of Tooradin Park in Tooradin. He was sent overseas to Egypt, where he arrived in October 1918 and he Returned to Australia on July 3, 1919.

Innes, Peter  (SN 1757)  Listed as Innis on the Honour Board. Peter was 33 when he enlisted on January 5, 1915. He was killed at Gallipoli four months later on August 6, 1915. His next of kin was his brother, William, of Hicksborough. Peter was a resident of Cranbourne when he enlisted and his death was reported in the 'Patriotic News' section of the South Bourke and Mornington Journal 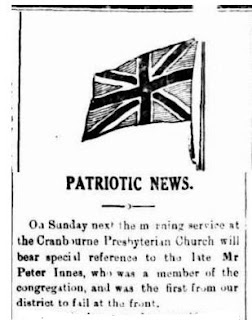 Kennedy, Alexander Stewart  (SN 2131) Alexander enlisted at the age of 31 on March 2, 1916. His occupations were listed as 'farmer and general smith'. His next of kin was his wife, Helen Quinn Kennedy. His enlistment papers say that he had spent 5 years with the Tooradin Rifle Club. Alexander Returned to Australia January 24, 1919.

Kirkham, Malcolm (SN 913)  Malcolm was 29, and a farmer from Lyndhurst, when he enlisted on June 8, 1915. His next of kin was his mother, Margaret. Lieutenant Kirkham was Killed in Action in France on September 2, 1918.

This is an article about the deaths of Malcolm Kirkham and William Lecky.
This is the link to the original article on Trove, which may be easier to read http://nla.gov.au/nla.news-article66194848
South Bourke and Mornington Journal  October 10, 1918.

Laidlaw, Rodney Goulburn (SN 2037) Rodney was a black smith and enlisted  on April 18, 1917 at the age of 28. His next of kin was his father, Robert, of Cranbourne,  He Returned to Australia on May 6, 1919. Interestingly, Rodney was born in Tatura which is in the Goulburn Valley and also part  of the old Shire of Rodney, which presumably influenced his parents when they were naming him.

McLellan, Donald (SN 2207) Donald was 19 when he enlisted on February 28, 1916. He was born at Lyndhurst and his next of kin was his father, Alexander of Ferndale, Cranbourne. Alexander Returned to Australia on June 10, 1919.

Morris, Philip Samuel (SN 1509) Philip enlisted at the age of 34 on September 6, 1918. He served in Rabaul in New Guinea and then was seconded to the Department of Agriculture over there and Returned to Australia on January 28 1920 and was discharged on medical grounds (post-malarial debility) on March 7, 1920.  His next of kin on enlistment was his wife, Minnie, and his address was Ellamatta, Cranbourne and his occupation was orchardist.

Pitcher, Claude  William Leonard (SN 2552)  Claude enlisted on February 26, 1916, aged 21. He was a farmer and his next of kin was his father, John, of Cranbourne,  He Returned to Australia July 31, 1918 after being wounded including sustaining a gun shot wound to his right shoulder, and discharged on October 14, 1918.

Reeves, Albert Reginald (SN 629) I believe that this is Albert Reginald Reeves as he is the only A.R Reeves I can find who enlisted. Albert was farm labourer, so could have worked on a local farm, but I can't find  a specific local connection.  He enlisted on July 20, 1915 at the age of one month off 23 years of age. He was born in Essex in England and his next of kin was his father, who also lived in Essex. Albert Returned to Australia on April 19, 1919.

Ryland, Arthur Anderson (SN 2553) Arthur enlisted at the age of 21 on March 23, 1916. His next of kin was his mother, Amelia Ryland of Clyde; his father Alfred having already died.  He stayed in France after the War ended and was attached to the Australian Base Depot and on September 29, 1919 he married Marie Jeanne Hureaux at the Town Hall in Argenteuil, in France.   He Returned to Australia on February 2, 1920. What happened to Marie? Did she come to Australia? In the 1925 Electoral Roll Arthur is listed at Duff Street Cranbourne with the interesting occupation, Picture Showman. Also at the address is his mother, Amelia, and  Hilda Alice Ryland, his sister, who was a dressmaker. In the 1930s Arthur was President of the Cranbourne Football Club, on the Recreation Reserve Committee and President of the Cranbourne Band Committee and gave his sister Ruth 'away' at her marriage to Thomas Facey, amongst other things. So we know all this, but I can't tell you what happened to Marie. 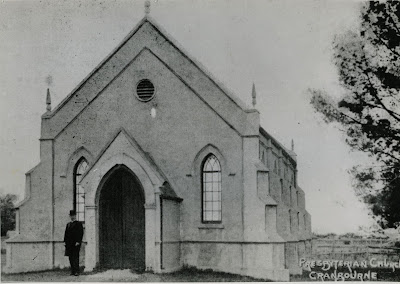 This is the original Cranbourne Presbyterian Church, built in 1860 and served the Cranbourne Community until the exisiting Church was built in 1953.

Taylor, William George (SN 1740) He is listed as G. Taylor on the Honour Board.  William was 24, had been born in Lyndhurst and  enlisted on February 17, 1916. He was the son of Richard Thomas Taylor whose address was Post Office Lyndhurst   William Returned to Australia January 8, 1919.

Thomas, Hedley Howard (SN 4611) Hedley enlisted on September 3, 1915. He was Killed in Action in France, on July 10, 1918. He was the son of George Thomas of Clyde. His enlistment papers said that he was Methodist, but this may have been a mistake, or he may have just been very ecumenical.