A message from the Sea

I came across this article in the Lang Lang Guardian of April 19 1916 about the chance discovery of a bottle containing a note, which was tossed overboard by  a couple of soldiers. It has a local connection, in that the bottle was discovered by  Mr Ward of Koo-Wee- Rup but it doesn't concern a local soldier. It does, however,  make you wonder whether any of our local  boys tossed a bottle overboard when they were leaving Melbourne to fight overseas and if so, whether anyone found it. 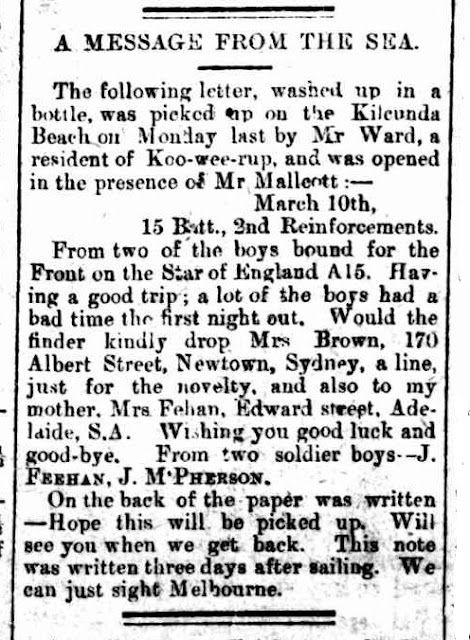 One of the writers was John Walter Feehan (Service Number 1592) who enlisted in July 28 1915 at the age of 18.  His occupation was Station Manager.  He was part of the Australian Army Service Corps Mechanical Transport and Returned to Australia on August 8 1918. I don't know  who his friend, J M'Pherson was, even having done  a search on the 15th Battalion, 1st to 23rd  reinforcements - there are seven McPhersons, none of whom have a first name beginning with J. The other mystery is, who is Mrs Brown of 170 Albert Street, Newton Sydney?
Posted by Heather at 7:46 PM