Denise Nest wrote about the Tonimbuk Honour Roll in her book, Call of the Bunyip. She said that 'the names and portraits of the men of the district were enclosed in a massive oak frame'.  The Roll was unveiled by Mr Pearson and a concert completed the occasion. Sadly, the whereabouts of this Roll is unknown.

Tonimbuk was settled it the 1890s as part of  a village Settlement Scheme, popular at the time.The aim of the scheme was to move unemployed families from Melbourne so they could have a  self sustaining life in the country as farmers, saw millers or by supporting themselves with any work they could obtain. It was not always successful for  a variety of reasons including the fact that many men lacked the necessary skills and the farms were too small to be viable. A State School opened in 1900, closed in 1906, reopened in 1910 and closed in 1950.

What follows is a list of the soldiers on the Honour Roll, plus a few others with a Tonimbuk connection,  their fate (i.e. when they Returned to Australia after active service or when they were Killed in Action) and their Service Number (SN) so you can look up their full service record on the National Archives website (www.naa.gov.au). Some of the extra information about the families of the soldiers comes from Call of the Bunyip.

Bridle, Charles William (SN 5629) Charles enlisted as a 19 year old on July 31, 1915. He was born in Williamstown and was living there when he enlisted,  his next of kin was father, Richard.   Charles married Erine (also listed as Eileen)  around 1917. A letter in his file, dated August 1, 1918 states that Erine had moved  from Williamstown to Bunyip. He Returned to Australia on May 8, 1919. Mrs Nest, in Call of the Bunyip,  has his name listed as Bridal, which is not correct, however as George and Elizabeth Bridal settled in Tonimbuk in the early 1900s and they are presumably the source of the name Bridal Road it's an obvious mistake.

Ellis, H  Corporal H. Ellis is listed on the Honour Roll, but I am unsure who that is. It may possibly refer to Albert Bruthniaux Ellis (SN 44) who enlisted on June 7, 1915 aged 27. His next of kin was his mother, Mrs M. Ellis of 'Mt Juliet', Bunyip. Albert Returned to Australia on September 23, 1919. He was a Lieutenant (which doesn't tally with him being listed as a Corporal)  and was awarded the Military Cross. Any help appreciated.

Jewell, Frederick William (SN 57) Frederick enlisted on August 22, 1914 when he was 26. His occupation was a labourer.  Sergeant Jewell Returned to Australia on January 7, 1919.
Jewell, John George (SN 55) John was 19 years and 10 months  old  when he enlisted the same day as his brother, Frederick, above. John was also a labourer. Whilst serving overseas John suffered from influenza, then mumps, then appendicitis and then he was Wounded in Action in France. John Returned to Australia on January 23, 1918.
Jewell, William James Peter  (SN 6136)  William enlisted on May 4, 1916 aged 22. He Returned to Australia on October 29, 1918 and had suffered from Trench feet and a fractured thigh. For some reason William isn't listed on the Honour Roll.
William and Elizabeth (nee Leask) Jewell came to Tonimbuk about 1892 and took up 50 acres of land;  they had nine other children beside Fred, John and William.

Leask, George Clifford (SN 2784) Call of the Bunyip reports on a homecoming function given on New Years Eve, 1918 to the three Jewell boys and George Leask. George for some reason isn't listed on the Honour Roll. George was 18 when he enlisted on July 26, 1916. In August 1918 he suffered a gun shot wound to the abdomen (penetrating) and Returned to Australia on October 20, 1918. George was the son of  Thomas and Rose Leask of Bunyip. I presume he was cousin of the Jewell boys as their mother was a Leask. 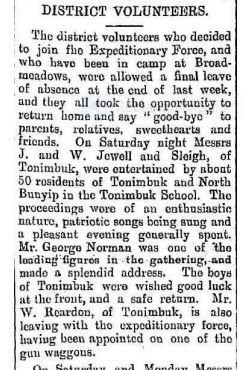 
Nylander, Alexander (SN 3435) Alexander was 27 when he enlisted on July 15, 1915. His next of kin was his mother, Mrs J. Nylander, of 'St Minians', Bunyip. He was discharged for medical reasons, suffering from shell shock and neurasthenia (a nervous condition)  Alexander Returned to Australia on August 25, 1917. Alexander's parents, Carl and Jessie (nee Forrester) had come to Tonimbuk in 1892.

Pearson, Frederick Francis (SN 869) Frederick enlisted on September 4, 1914, when he was 25. Frederick was Killed in Action on April 25, 1915 at Gallipoli. It wasn't until June 1916 that a Board of Enquiry finally confirmed that he had been Killed in Action, he was previously listed as missing. This information was not communicated to the family straight away as there is a letter from his father in his file dated September 1916 asking for confirmation of his death, he writes "Personally I am sure of his death but it is his mother who keeps on hoping to hear from him"  Frederick was the son of Charles and Blanche (nee Cox) Pearson who had arrived in Tonimbuk in 1893, they had 320 acres of land which they used an orchard.

Pilkington, Archibald Clarence (1268) Archie was living in Williamstown and his occupation was a driver,  when he enlisted on July 12 1915 at the age of 21. He  served overseas but was injured and also suffered from bronchitis and so was discharged due to medical reasons and Returned to Australia on Apri1 11, 1916. Archie and his wife Vera are listed in the 1917 Electoral Roll as living at Tynong. In 1919 they are back in Williamstown and he has  motor garage.  In 1924 Ada is listed alone in Williamstown and there is an Archibald Clarence Pilkington in Rocklea near Brisbane, occupation motor driver, so it seems that the marriage had broken up by then.  Vera was born in Longwarry and was the daughter of John and Catherine (nee Parsons) Topp, and so was the sister of Charles and John Topp, listed below.

Reardon, Eric Charles (SN 2524). Eric enlisted on June 3, 1915 at the age of 18 and died of wounds on September, 9 1918.  Eric is also listed on the Bunyip War Memorial.
Reardon, William Horace (SN 16)  William, the brother of Eric, above, enlisted on August 19, 1914. They were both born in Tatura and were the sons of James Edward Reardon of Bunyip. William Returned to Australia on November 12, 1917 after being discharged as permanently unfit. William had suffered from months of diarrhoea and bilharziosis (a parasite infection from a flatworm)

A report form the Bunyip Free Press of September 9, 1915 on the local boys
Jack Sleigh and Fred Jewell.
http://nla.gov.au/nla.news-article129630841

Sleigh, John (SN 58) John enlisted on August 22, 1914, the same day as Fred and John Jewell, when he was 25 years old. John had  a colourful military record and was charged with a number of offences whilst on active duty and also suffered from a leg injury that became quite  a bad ulcer which wouldn't heal and he was discharged as medically unfit after he  Returned to Australia on February 15, 1918.
Sleigh, T  I believe that this may actually be Stephen Sleigh (SN 3244) who is also listed on the Bunyip War Memorial. Stephen enlisted on July 16, 1915. Stephen was listed as missing on July 28, 1916 and  a later Court of Enquiry found that he was Killed in Action on July 19, 1916.
Stephen and John were both born in Trentham and they were the sons of Charles and Mary Jane Sleigh of Bunyip. 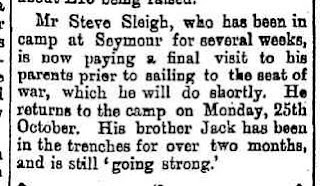 A sadly prophetic article - the visit made to his parents was indeed his final visit.
Bunyip Free Press October 21, 1915
http://nla.gov.au/nla.news-article129630990

Towt, O.O  Listed as O.O. Towt in the Call of the Buyip, but I believe that it is the grandly named Canterbury Oliver Towt (SN 72). Canterbury was the son of Catherine Towt of "Glen Evergreen" Tonimbuk. He was an orchardist and enlisted at the age of 25 on July 19, 1915. He Returned to Australia on May 11, 1919.