What was an Exemption Court?  The government made a proclamation at the beginning of October 1916 declaring all unmarried able-bodied men between the ages of 21 and 35 were to undertake military training leading to the possibility of service within the Commonwealth. All men meeting those criteria had to enrol at enrolment centres where they were assessed for suitability. However, there was a procedure whereby men classified as suitable could appeal and be granted exception from service. http://localhistory.kingston.vic.gov.au/

Courts were set up in each Federal Electorate and men who wished to be exempt from military training had to fill out a form in duplicate, deliver it to the military registrar and they would then be able to put their case at the Exemption Court. The article from The Argus, below, outlines the process. 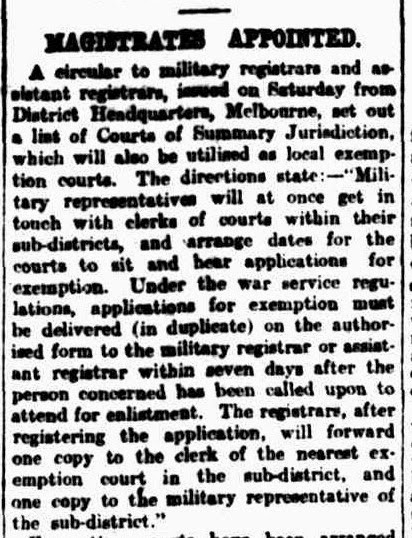