The Cora Lynn War Memorial was unveiled on Wednesday, February 22 1922. According to a report in the Pakenham Gazette of March 10, 1922  (reproduced left) the attendance was large, in spite of the showers which fell incessantly.The stone and the machine gun was unveiled by Cr Groves, M.L.A.  I don't know what happened to the machine gun but the memorial is still at Cora Lynn.

There are nineteen names on the memorial for soldiers from the First World War.  I have researched their service number (SN) so if you are interested in finding out more about these soldiers you can look up their full service record on the National Archives of Australia site or their records on the Australian War Memorial site. I have also included their connection to Cora Lynn or the surrounding area.

Here are the soldiers -
Clarkin, William. Service Number (SN 1522). William was born at Bunyip and enlisted at Tynong on  December 7, 1914 at the age of 21. He died of wounds in France on August 26, 1916. His next of kin was listed as his brother L. Clarkin of Iona, although an annotation on his Attestation paper says it is his eldest brother, John Clarkin of Garfield.

Evans, Harry  (SN 5589). Harry enlisted at Warragul in March 1916 at the age of 37. Harry was from  Cora Lynn and his wife Edith Minnie was listed as his next of kin. He embarked from Melbourne on September 25, 1916 on the HMAT Shropshire A9 and returned to Australia on December 31, 1916 having suffered continually form measles and pneumonia. He was discharged from the Army on February 12, 1917.

Fritz, L –This is Leslie James Fritsch* (SN 2661). Leslie enlisted on July 19, 1915 at the age of 21. He left Australia in October 1915, was invalided back to Australia in April 1916 and died of diabetes on July 16, 1916. He was born in Prahran and at the time of enlistment his mother was living in Warrnambool. His occupation was farm labourer and he was obviously working at Cora Lynn at the time of his enlistment, as the article below attests. 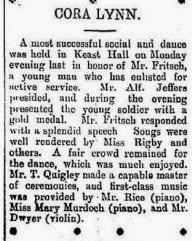 Huey  John Robert. (SN 3168). John was born at Castlemaine and enlisted at Warragul at the age of 30 on November 24,  1916. His occupation was listed as a labourer and he lived at Cora  Lynn at the time of enlistment. His next of kin was his friend, Mrs Mary Ann Jones of Carlton. John Returned to Australia on June 30, 1918 and was discharged on medical grounds in the October due to Debility, Bronchial catarrh and he had also suffered from paratyphoid and enteric fever.

Jeffers  Raymond Alva (SN 6290). Ray was born at Strathbogie and enlisted at the age of 23 on  May 25, 1916. He was a Cora Lynn farmer and the son of Alexander Jeffers, also a Cora Lynn farmer. Lieutenant Jeffers was awarded the Distinguished Conduct medal and the Military medal. He was in France until at least May 1919 and arrived home in Australia later that year. After the War he moved to Dandenong and spent seventeen years (1946 - 1963)  as a Councillor with the Dandenong Shire and City of Dandenong and was Shire President and Mayor.  You can read an interview in the Dandenong Journal with his his daughter, Mrs Wilma Coleman, here. 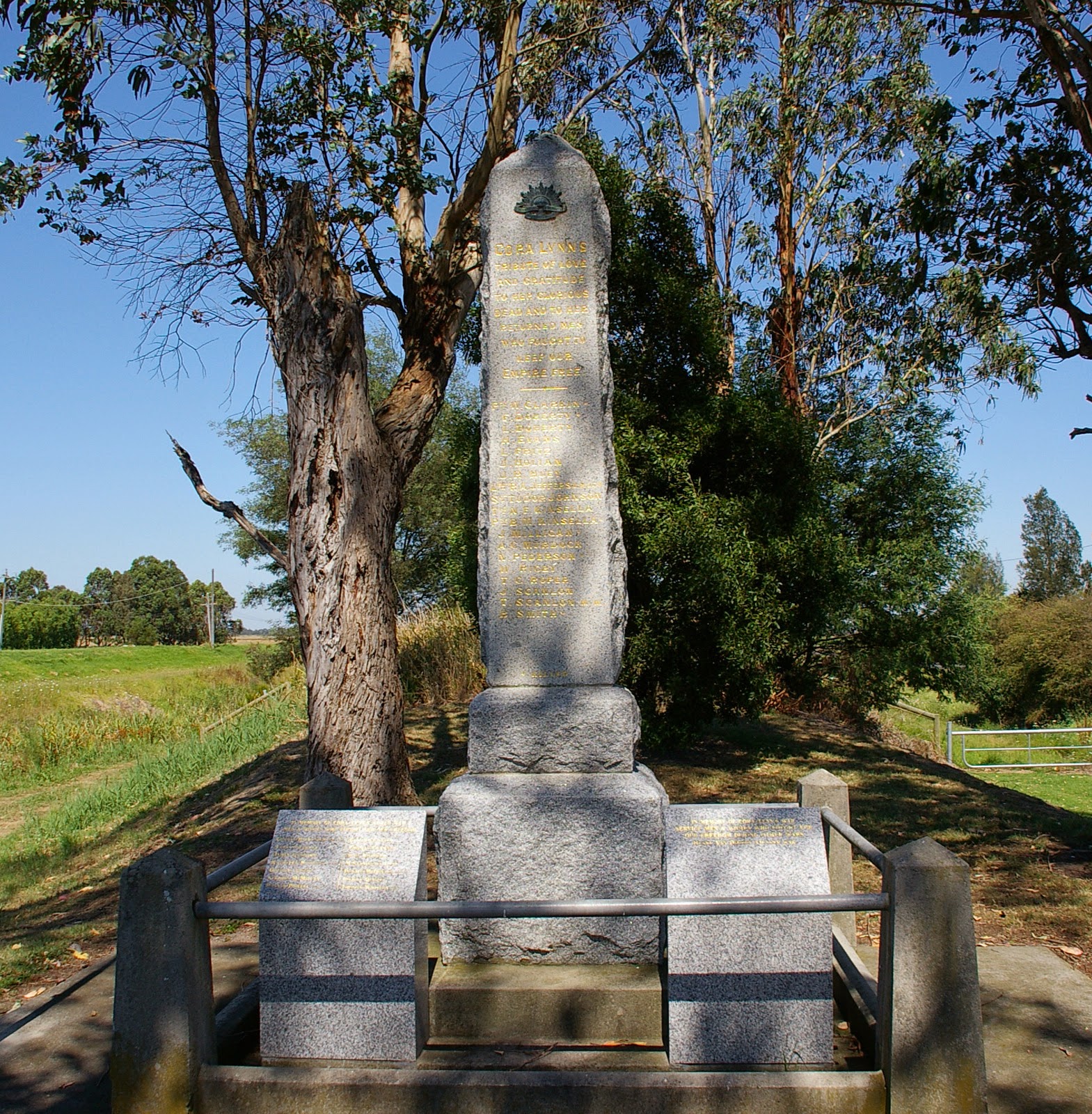 Johnson, Charles Tudor  (SN 588).   Tudor, as he was known, was 19 when he enlisted on November 7, 1914. He was a farmer who lived at Cora Lynn and his next of kin was his mother,  Mrs Fanny (nee Bickford) Johnson, of Cora Lynn. Tudor had already attended Dookie Agricultural College when he enlisted, which he did  at Enoggera in Brisbane. His father was Henry George Johnson who for some reason was not listed as the next of kin, as generally fathers are more likely to be the official  next of kin than mothers.  Tudor Returned to Australia on December 23, 1918.

Milligan, Joseph Lewellen (SN 5376)  Joseph enlisted at the age of 21 on March 8, 1916, he was a 21 year old farm hand of Cora Lynn.  His mother was Kathleen Milligan, also of Cora Lynn, was his next of kin. Her name was sometimes listed as Catherine. His father was James Milligan.  Joseph was Killed in Action on February 23, 1917.

Pederson, Nils  (SN 1249). Nils was born in Norway and was working as a farm labourer at Cora Lynn at the time of his enlistment on February 24, 1915.  He was 21 years old and his next of kin was his father who lived in Norway.  He was Killed in Action in France on September 1, 1918. In his will, dated July 13, 1917, he left everything to Miss Nellie Jeffers of Cora Lynn. Nellie was the sister of Ray Jeffers, above, so I wondered if he was working for the Jeffers. However, also in his file was a letter from Miss Corrie Anderson asking about her friend, Nils, so maybe he was working for the Andersons.  Corrie later married Dan Kinsella, a brother of Bertram and Michael, above. 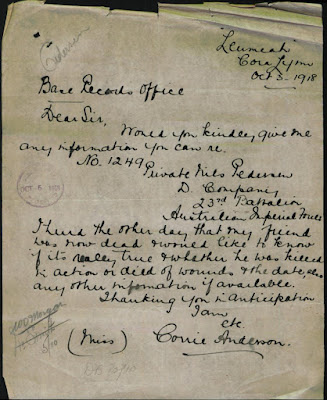 Roper, Thornton Graham  (SN 61922). Thornton was a 20 year old motor mechanic from Cora Lynn and he enlisted on June 24, 1918. His father, James Roper, also from  Cora Lynn was his next of kin, Thornton did get sent overseas and Returned to Australia January 4, 1919.

Scanlon, Joseph Bernard  (SN 3452)  Joseph enlisted on May 9, 1916. He was 21 years old and a labourer. He Returned to Australia on July 5, 1919. Joseph also served in the Second World War from June 1940 to May 1944, in the World War Two Nominal roll it says that he was born July 2, 1900, which only makes him 16 when he enlisted in the Great War, however the Index to the Victorian Births, Deaths and Marriages have him listed as being born 1895, so it seems he knocked 5 years off his age in 1940!
Scanlon, Thomas  (SN 505)  Thomas was 21 when he enlisted on January 12, 1915. He was a farmer. Thomas was awarded the Military medal. He Returned to Australia on April 5, 1919.  They are also listed in some official records with the surname Scanlan. They were the sons of William and Ellen Scanlon of Cora Lynn  one newspaper report in a local paper says they were from Scanlons Drain, Cora Lynn.

Smith, Beith.  (SN 1436)  His first name was also listed as Bert and Berth in some documents but I believe that Beith is correct. He was Killed in Action May 9 or May 10 in 1915 at Gallipoli.  I had a hard time finding who B. Smith actually was until I  found out that Beith enlisted at Tynong on September 21, 1914, aged 19. The Attesting Officer was William Carney, Shire of Berwick President. His occupation was listed as a labourer. He was born at Rochford, near Kyneton and that is where his father lived.


According to Australian ANZACs in the Great War 1914-1918 website there is another soldier from Cora Lynn, but for some reason he is not on the War Memorial.
Thomas, James Matthew (SN 6109). James was born in Bendigo and enlisted in Melbourne on March 18, 1916 but on the Nominal roll his address on enlistment was Cora Lynn and his occupation was labourer. His next of kin was his Guardian, Mrs Higgins of North Melbourne. He was 37 when he enlisted and he Returned to Australia on June 2 1919.

*Thank you to Lynne Bradley of the Narre Warren & District Family History Group www.nwfhg.org.au  for discovering the identity of L. Fritz. It's great that we can give him his proper identity.
Posted by Heather at 11:00 PM