More than 3,000 Civilian nurses volunteered for service during the Great War and I wondered if any came from this area - so I went to Trove and typed in the keywords  'nurses' and 'Berwick', filtered the results down to the 1910 to 1919 period and came upon this article in a January  1919 South Bourke and Mornington Journal.

So, now I knew that Sister Vines from Berwick had served in the War, but what else could we find out about her? I looked up the Electoral Rolls on Ancestry Family History database and found this entry for Sister Vines in the 1914 roll and discovered her first name was Florence.

Then I did another search on Trove with the key words 'Vines', 'Shepton' and 'Berwick' to try to find out what Shepton was - I thought it may have been the name of a house - but then I found this advertisement which was in  Berwick Shire News  from January to March 1914, which told us that Sister Vines  operated a private hospital in Berwick with Sister Duigan and  the hospital was called Shepton. 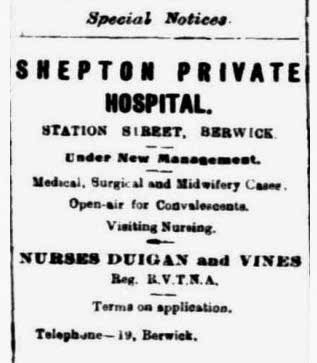 The next step was to find out about  Florence Vine's war service and the National Archives of Australia (www.naa.gov.au) was the place to look, as they have digitised all the service records of Australian who served in the Great War. Florence joined the Australian Army Nursing Service at the age of 29 on June 25, 1915. Her birth pace is listed as Geelong and it also tells us that she did her nursing training at the Ballarat Hospital. She left Australia on July 17, 1915 on the HMAT Orsova. Sister Vines suffered from various illnesses including dysentry and attacks of rheumatic fever and returned to Australian in 1916 to convalesce, went back on active service and left Australia again on June 12, 1917 for Salonika (now Thessaloniki) in Greece but was finally invalided back to Australia in April 1918. 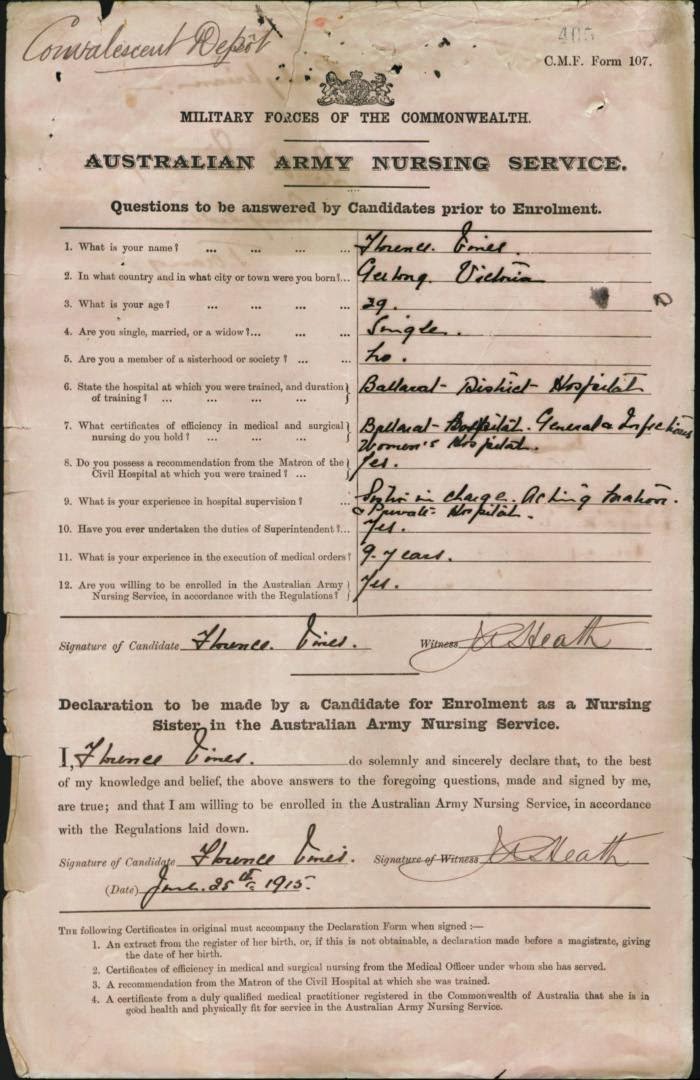 This is Florence's enrolment paper  to join the Australian Army Nursing Service, from her service record at the National Archive (www.naa.gov.au)

What else do we know about Sister Vines? She was the twelfth and last child of Joshua Vines and Mary Nicholls and was born in Geelong in 1885. Her own mother, Mary,  died ten years later at the age of 51 and her father died at the age of 72 in 1906. After the War I have traced Florence through the Electoral Rolls (available on Ancestry)  and it appears that she didn't return to live in Berwick but lived around Malvern, Armadale and Balaclava. In the 1924 rolls she is listed as living with her sister, Blanche, and her occupation is listed  as a Chiropodist (now called a Podiatrist). Florence remained  a Chiropodist until she retired. She died in 1979 at the age of 94. 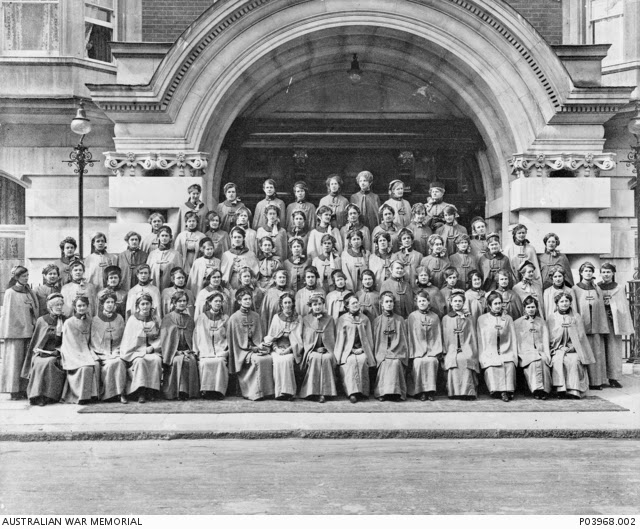 Finally, we are lucky enough to have a photograph of Florence Vines. This is a photograph of  members of the Australian Army Nursing Service (AANS) most of whom embarked from Australia on the Orsova during July 1915, outside the Ivanhoe Hotel in London, taken about 1916. Florence Vines is on the third row, second from left.
Australian War Memorial Image P03968.002    www.awm.gov.au