Researching World War One soldiers and other personnel

If you are interested in finding the role your relatives or members of the local community played in the War, here are some good resources. 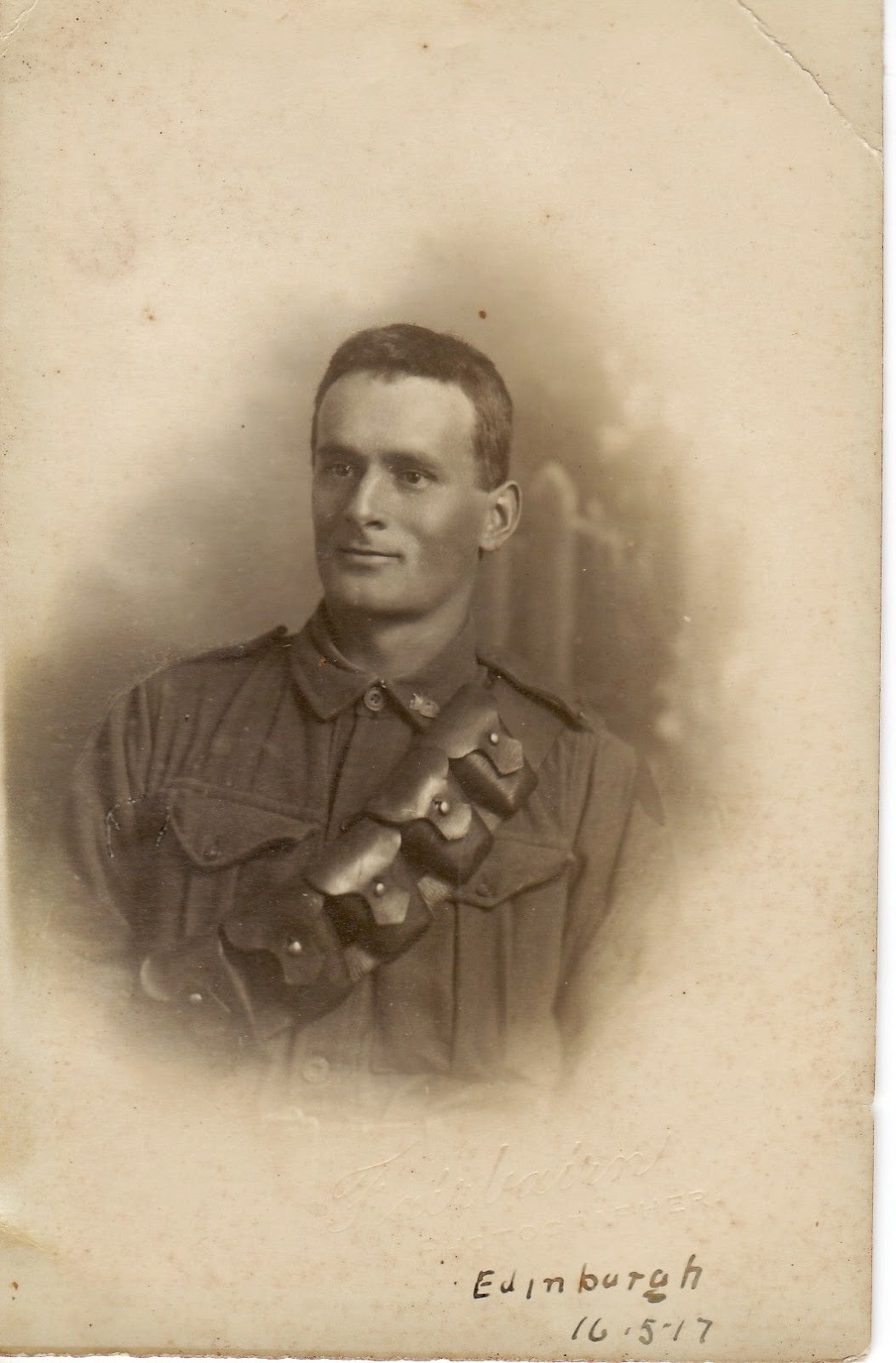 The National Archives of Australia (NAA)  www.naa.gov.au has digitised all the service records for World War One personnel. Just type a name into the search box and you will get a list of results which can then be refined down, if necessary. The records cover the enlistment papers, service records, medical history and any correspondence between the Army and the soldier or his next of kin. The records can be 2 pages long or over 70 pages and some have letters regarding pensions, lost medals etc up to the 1950s.

This is my great uncle, Frank Weatherhead (June 8, 1893 to September 26, 1970). Frank was born at Lyonville, the seventh child out of nine of Horatio Weatherhead and Eleanor Hunt. The family were living at Tynong when Frank enlisted on July 6, 1915. His service number was 6960.

Frank's record at the National Archives of Australia  is 34 pages long and includes his war service as well as a letter he wrote in 1955 asking if he could have new ribbons for the three medals he received during the War. The Army wrote back saying that if he sent them three shillings they would send him his ribbons! 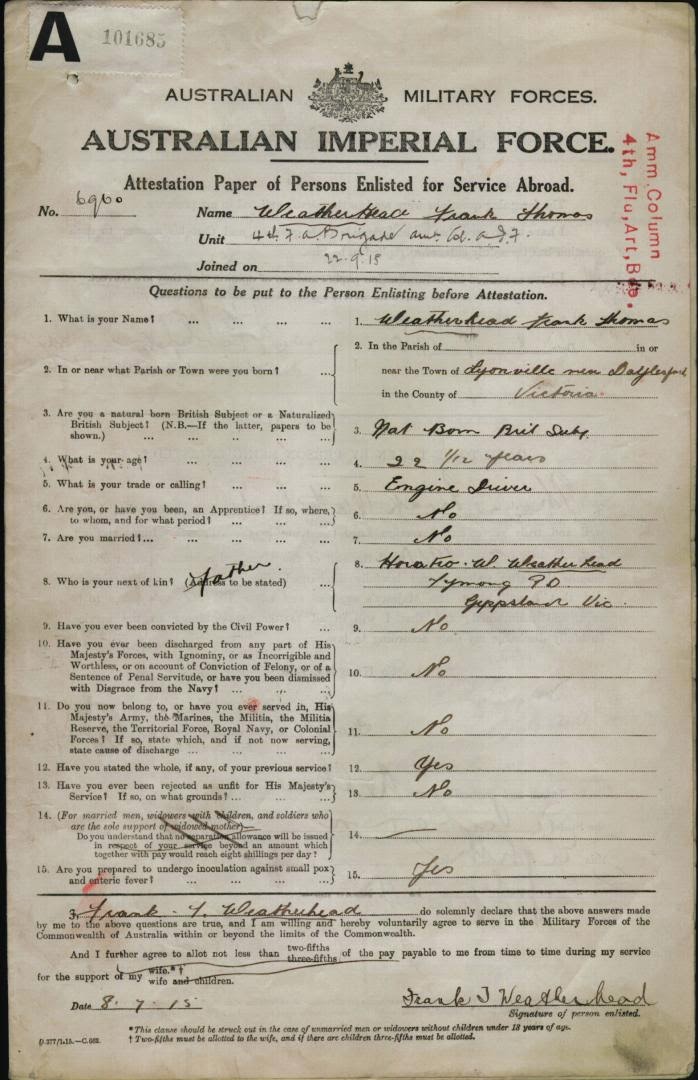 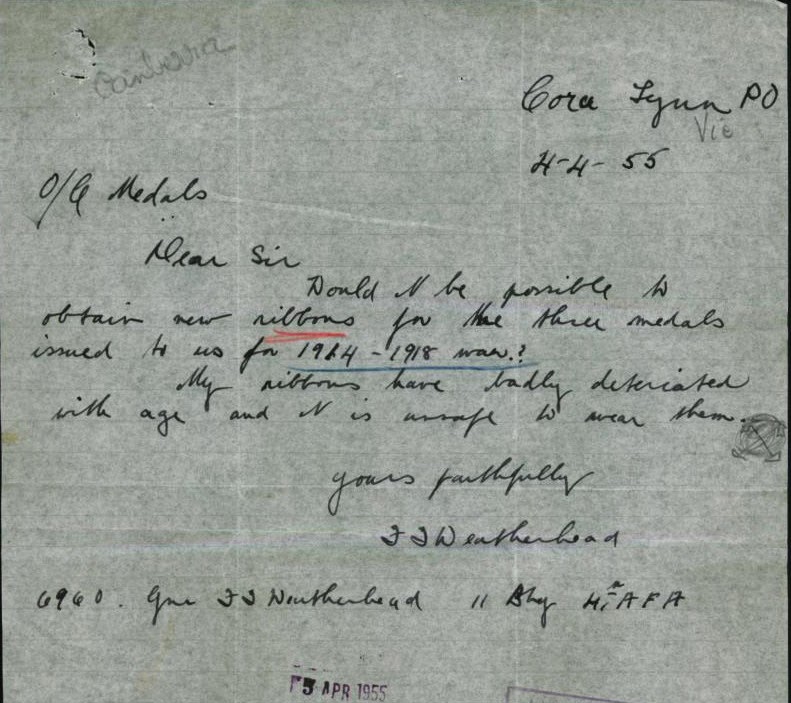 This is Frank's letter he wrote in 1955 asking for his ribbons to be replaced.


The Australian War Memorial (AWM)  www.awm.gov.au has several sources of information. There are the Embarkation Rolls which have details of approximately 330,000 AIF personnel, recorded as they embarked from Australia for overseas service during the First World War.

There are also the Nominal Rolls at the Australian War Memorial which have details of approximately 324,000 AIF personnel, recorded to assist with their repatriation to Australia from overseas service following the First World War.

You really need to check the NAA and the AWM records to find your soldier as, in my experience, not all names appear on each site. The AWM also has lists of those who received Honours and Awards and the Red Cross files which consist of approximately 32,000 individual case files of Australian personnel reported as wounded or missing during the First World War.

If you want to locate a soldier by birth place or place of enlistment then try Discovering ANZACs  http://discoveringanzacs.naa.gov.au/   You can also add your own information to this site. The information comes from the NAA records but sometimes the AWM records have different information, so just because your soldier or your town isn’t listed it doesn’t mean that they don’t exist.  Cora Lynn has nineteen names on their World War One War Memorial and and thirteen had a Cora Lynn address at the time of enlistment, however Cora Lynn does not appear on the Discovering ANZACs  website, because no-one was born there (the name came into use in 1907) and apparently no-one enlisted from there. Frank Weatherhead appears under the Lyonville entry as that is where he was born, but even though he was living in Tynong when he enlisted, he actually enlisted in Melbourne, so he does not appear under Tynong. His brother Alf Weatherhead, does appear under Tynong as that is where he enlisted.

Another website where you can locate soldiers by address and name is the AIF Project: Australian ANZACs in the Great War 1914-1918. https://www.aif.adfa.edu.au/index.html I could find nine of my nineteen Cora Lynn Soldiers on this site and they also listed one other who lived at Cora Lynn at the time of his enlistment but is not on the memorial.

Once again, it pays to look at more than one source when you are trying to locate military personnel from your town.
Posted by Heather at 10:59 PM