Streets in Berwick sub-division named for World War One soldiers

There is a pocket of streets in Berwick between Centre Road and Homestead Road named after local World War One soldiers. It is part of the Alira Estate developed around 2017 by the Moremac Property Group. So often developers select names for streets which have no connection to the history of the area, so it is a wonderful thing that local soldiers are being honoured in this way. The streets are Imer Crescent, Knox Street, Tulk Street, Freer Way, Shanks Drive, Ladd Place, Warmbrunn Crescent, Seeley Walk and McNaughton Crescent.
As an example of very recent history the following two images are from my 2017 and 2019 Melway Street Directories. The subdivision was not in my 2015 Melway, so that gives you an idea of when the streets came into being being. 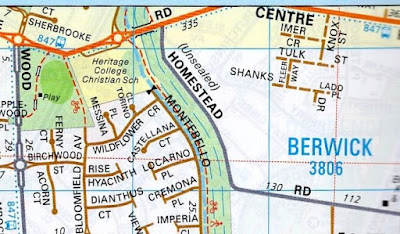 From page 130 of the 2017 Melway Greater Melbourne Street Directory. 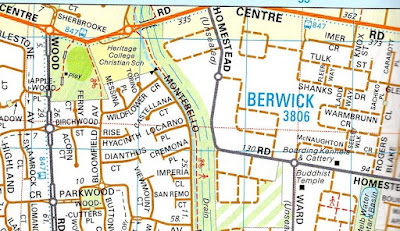 From page 130 of the 2019 Melway Greater Melbourne Street Directory.
We will have a look at the men behind the names. I have included their service numbers (SN) so you can look up their full record on the National Archives of Australia, www.naa.gov.au. Some of the following information also comes from The AIF Project, https://www.aif.adfa.edu.au/  and from Residents of Upper Beaconsfield, researched by Marianne Rocke, www.upperbeaconsfieldhistory.org.au
Imer Crescent
Louis James Imer (SN 3655). Louis enlisted at the age of 19 on February 1, 1918. He was a boot machinest, having done a three year apprenticeship with the Marshall Shoe Company of Richmond. His next of kin was his father, George Imer, of Beaconsfield Upper. A notation on his record says that his mother, Catherine (nee Wheeler) died in August 1916. Louis Returned to Australia on July 22, 1919. He married Violet Bailey in 1922 and he died in 1969.
Knox Street
George Hodges Knox. George Knox enlisted April 2, 1915, as a Captain.  He was a 29 year old orchardist of Beaconsfield Upper and his wife, Kathleen (nee McPherson) was his  next of kin. He Returned to Australia on May 2, 1918. He had a sterling military career, was promoted to Lieutenant Colonel and Mentioned in Despatches. You can read more about his life and career in his Australian Dictionary of Biography entry, here. The City of Knox is named after Sir George Knox.
Tulk Street
Richard Stephen Tulk (SN 2175).  Richard was 19 when he enlisted on April 21, 1915. He was an engineer and his next of kin was his mother, Caroline Tulk, of the Cardinia Park Hotel in Beaconsfield.  He was wounded twice - shell wound to the left arm and later another one to the right arm. He Returned to Australia July 6, 1919.  Richard married Mabel Ridgway in 1921 and he died in 1964 in Queensland.
Fleer Way
There were two Fleer Brothers who enlisted - Harold Edward Fleer (SN 3112) and Cyril August Fleer (SN 6263). They were the sons of Edward and Martha (nee Povey) Fleer of Harkaway, and they were both farmers.  Harold enlisted at the age of 18 on July 12, 1915, and Returned to Australia April 13, 1919. Harold married Esther Penfold in 1926 and died in 1943 at only 46 years of age. Cyril was also 18 when he enlisted on May 5, 1916. He Returned to Australia April 5, 1918. Cyril married Margaret Barr in 1922 and died in 1966.  The Fleers were one of the German Lutheran families who settled at Harkaway from the 1840s, you can read about them here. 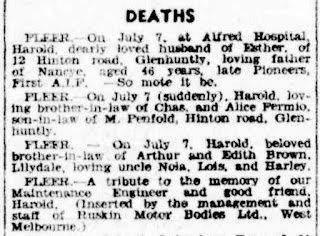 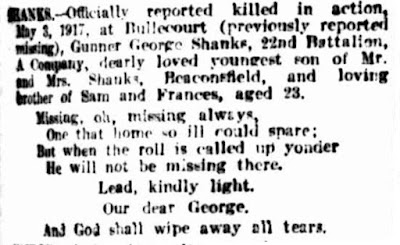 Death notice of George Shanks.
The Argus February 6, 1918 http://nla.gov.au/nla.news-article1637625
Ladd Place
Edward Wildes Holyaok Ladd (SN 5094). Edward enlisted on November 9, 1914 at the age of 25. He was an engineer. He Died of Wounds (gun shot wound, lower extremities) on April 7, 1917, whilst serving in France. Edward was the son of Charles and Emily (nee Holyoak) Ladd of Beaconsfield Upper.

Death notice of Edward Ladd.
The Argus May 1, 1917 http://nla.gov.au/nla.news-article1614387
Warmbrunn Crescent
Alfred Ernest Warmbrunn (SN 2014). Alfred's address was Tarlita, Beaconsfield and he was a 31 year old gardener when he enlisted on March 7, 1916. His mother,  of the same address was his next of kin. Alfred Returned to Australia February 19, 1919. Alfred was the son of Ernest and Catherine (nee Stevens) Warmbrunn. He died in 1966 aged 81. The Warmbrunns were another Harkaway Lutheran family, see here.
Seeley Walk
Albert Seeley (SN 4321).  Albert was born in England and his next of kin was father, who also lived in England. He enlisted in July 15, 1915. He was a 23 year old gardener and his address was Hilton in Berwick. Albert Returned to Australia March 8, 1919. He married Fanny Elizabeth Sims in 1930 and died in 1941 aged 48. Hilton was the home of Alexander Buchanan Pearson and his wife Mary Jane (nee Wishart). His occupation in the Electoral Rolls was 'independent means,' wealthy enough to employ a live-in gardener; he was, I believe, the son of William Pearson of Kilmany Park in Gippsland.

Albert's death notice
The Age January 18, 1941 http://nla.gov.au/nla.news-article205289865
McNaughton Crescent
Hugn McNaughton (SN 3869B). Hugh enlisted on August 2, 1915, aged 31. He was a labourer and his next of kin was his mother, Mary McNaughton, of Beaconsfield. He was wounded (gun shot wounds to the head and arm; the head wound was severe) and Returned to Australia January 30, 1918. He died the same year on May 15, whilst being operated on at the Military Hospital in Caulfield. 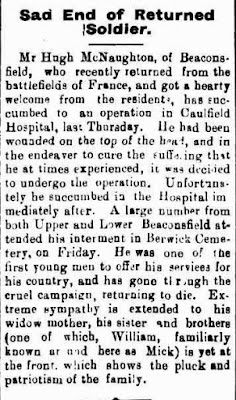