Letter from Egypt from Charles Ware, 1915

The Lang Lang Guardian of March 15, 1915 published the following letter from Charles Ware of Yallock.
Soldier's Letter
The following are interesting extracts from letters received by his people from Pte. Chas. Ware, late of Yallock, dated from Egypt, Jan 24:
Do not worry about me, as I will be all right. I've got my chance to take like the rest, but I hope to get home again safe. I don't think any one could die for a better cause, and l'm willing to do my little bit as soon as they want me. I hear the boys in Australia are enlisting well. There are a lot of new lots coming forward. We are here just six weeks tomorrow, so we are used to the place now. The sand is crook, though, for drill, I have not done any drill now for a month, as I've been on light duties owing to having my stay in the hospital.
I've written nearly fifty letters since I've been here, so I am expecting a big mail. I was as pleased as if I were home when I got your letter last night, but I hope this time next year to be back again with you all. If you have any papers send them along, as we never get anything here to write about. I went in to Heliopolis on Saturday night and had my photo taken in a group. I had three of my old mates with me. I sent you five of my p.c. in my last letter. You can see I'm not looking to bad on it. I think I put in most of my time writing letters. 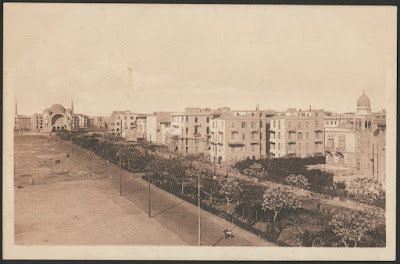 Heliopolis, where Charles had his photo taken in January 1915.
Heliopolis - Avenue des Pyramides, c. 1915. State Library of Victoria Image H99.166/308
I am sick of Cairo. I don't go out much of week nights. I hope we get a shift before long, as this is very little good here as far as the safety of the soldier is concerned, as Cairo is the worst place on earth. I had a walk about yesterday, and went over to see the Virgin Tree and the Holy Well. It was lovely to see. First of all I went to the R.C. Church, which is supposed to be the first Church the Virgin Mary went into, after leaving Jerusalem, I am also sending you the piece of wood I cut off the tree.

I saw young Bob Gray from Lang Lang. He is camped in with Frank McGrath. He's a big fellow, too. I've met dozens of the boys here. They do a lot of heavy drill now, with full packs up and our rifle too. It weighs about 60lbs, and it's pretty crook carrying it all day. (Lang Lang Guardian March 15, 1915 see here)
Charles William Francis Ware (SN 3285a)  enlisted at the age of 23 on July 27, 1915. He was employed on the Railways. He suffered a severe gun shot wound to his right buttock and Returned to Australia on March 17, 1917 and was discharged for medical reasons on July 9, 1917. He was born at Nyora, and his next of kin was his mother Mrs Christina Wilson Ware who lived at Kongwak.   His father was Charles Joseph Ware. After the War, Charles took up a Soldier Settler farm at Kernot. You can read about this on the Battle to Farm website, here. Charles married Elsie Priest in a pretty wedding at St Mary's Ararat on March 4, 1919. Elsie wore ivory silk, trimmed with silk lace. They honeymooned in Lakes Entrance. You can read a lovely report of the wedding in The Advocate of March 15, 1919, here. Charles is listed on the Yallock Honor Roll, see here and he died in 1944, aged 61.
Charles mentions 'Bob Gray from Lang Lang' - this is Robert John Gray (SN 1478). Robert enlisted at the age of 18 on August 14, 1915. He survived the War and Returned to Australia June 15, 1919. The Frank McGrath mentioned is possibly Francis Edmund McGrath (SN 1178), born in Poowong and who lived at Woodleigh.  Frank enlisted at the age of 20 on June 8, 1915. He died of wounds at Beersheba on October 30, 1917, a long way from Gippsland.
Posted by Heather at 7:11 PM