The Poppy: a symbol of remembrance and gratitude

The Poppy was first sold to commemorate Remembrance Day or Armistice Day - November the 11th - in 1921. They were made by the orphaned school children in France (1). It was estimated that over 9,000 French children were orphaned due to the War (2). The poppy was adopted because during the First World War, red poppies were among the first plants to spring up in the devastated battlefields of northern France and Belgium. In soldiers' folklore, the vivid red of the poppy came from the blood of their comrades soaking the ground (3).
The sight of poppies on the battlefield at Ypres in 1915 moved Canadian Lieutenant Colonel John McCrae, to write the beautiful poem In Flanders field  -
In Flanders fields the poppies blow
Between the crosses, row on row,
That mark our place: and in the sky
The larks, still bravely singing, fly
Scarce heard amid the guns below.
We are the Dead. Short days ago
We lived, felt dawn, saw sunset glow,
Loved and were loved, and now we lie
In Flanders fields.
Take up our quarrel with the foe:
To you from failing hands we throw
The torch; be yours to hold it high.
If ye break faith with us who die
We shall not sleep, though poppies grow
In Flanders fields.
Lieutenant Colonel John McCrae died of pneumonia and meningitis in France on January 28, 1918. You can read more about his life on the Veterans Affairs Canada website, here. 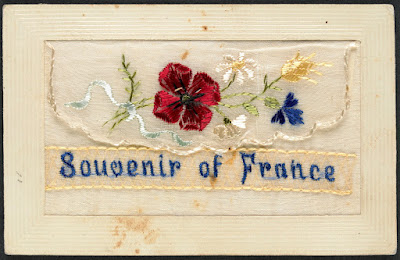 Souvenir of France. Postcard, dated September 23, 1916,  written from
son Tom to father Mr J. O'Halloran, North Castlemaine.
State Library of Victoria Image H41582
This is a report from The Herald of November 11, 1921 of selling of the poppies in Melbourne for the first time (4).
The Poppy's Appeal - City Red with emblems - Remembrance and Gratitude
The Poppy, the universal memorial flower for the Allied fallen soldiers, reigned supreme today. More than 300 ladies sold the little silk emblems which had been made by the orphaned school children of Flanders, in the regions desolated by the war, throughout the city streets, for the Poppy Day Appeal. Melbourne, having honored the Dead, remembered, the orphaned children. The occasion was a day of solemnity. It was the most subdued street appeal which has been seen here. Women workers of the Alfred Hospital Auxiliary, under the leadership of Mrs James Angus, had a stall in Queen's Walk, and the volunteer staff of the Anzac Buffet also gave help. The six kiosks in the city, under the supervision of Mrs McMillan, Mrs Deakin, Mrs Herbert Brookes, and Mrs Collins, displayed practically nothing but floral emblems. Stationery, in the form of writing pads, calendars and Christmas cards, all bearling the red decoration, were also sold. But tomorrow the street cleaners will have little work to do in restoring the condition of the city to its usual standard. There will be very little rubbish left strewn about on the road ways and footpaths.
Buyers Eager
Mr A. M. David, secretary of the Victorian branch of the Returned Sailors and Soldiers' Imperial  League of Australia, who is acting as organising secretary, of the Poppy Day Appeal, said this morning that he expected all the 250,000 silk poppies of the smaller size would be sold during the day. One lady from Albert Park had returned her collecting box filled at ten this morning, and had taken away another. The larger flowers, for which 2/6 was demanded by the voluntary sellers, had been eagerly sought after, and though their number ran well into four figures, very few of them, were left on hand before noon. Many of these had arrived from Flanders made up into the form of crosses and wreaths, large and small, and it was hoped that generous sympathisers would buy them with £5 notes. The star attraction was a large aeroplane model which had been decorated with those larger poppies by Mrs Jocelyn, of the Anzac House staff. It was hoped that this would bring in many pounds to the fund, of which 50 per cent, will be sent to France to succor the orphans of French soldiers, and 50 per cent., less 10 per cent., will be devoted to the fund for the Anzac House Memorial Building. The balance will be given to the sub-branches of the R.S.S.I.L., which have undertaken to soil poppies in the country.
Business at Its Best
When the congregations poured out of the many city churches, after the Armistice Day services, business at the kiosks was at its best. Buying a poppy at a kiosk - and most of those sold there were of the larger size - seemed to be part of the devotion to the fallen. The lighter vein was seldom noticed. The organisers had many offers of help from musical parties, willing to sing and give "stunts" in the streets, but in view of the day's commemoration it was very wisely considered undesirable to encourage any theatrical displays. Tonight the boxes containing money will be counted at the National Bank, but Mr David wants to point out that those who have been unable to leave their homes today, or have passed the time in quiet contemplation, may still send their donations to his Poppy Day Appeal office, in the basement of the Town Hall.
Footnotes
(1) The Herald, November 11, 1921, see here.
(2) Some of these orphan made their way to Australia, read about this here https://sjmc.gov.au/french-orphans-who-came-to-australia/
(3) Australian War Memorial website https://www.awm.gov.au/commemoration/customs-and-ceremony/poppies
(4) The Herald, November 11, 1921, see here.
Posted by Heather at 2:24 PM