On January 26, 1932 The Herald published an article by Russell Grimwade (1) on the proposed memorial to General Sir John Monash, who had died on October 8, 1931. Monash was a civil engineer, a soldier and after the First World War  the General Manager of the State Electricity Commission, who established the power stations at Yallourn using the coal deposits (2).  In the 1920s Monash was broadly accepted, not just in Victoria, as the greatest living Australian (3) and thus shortly after his death the Monash Memorial Committee (4) was established to oversee the construction of a suitable memorial to him.

The Committee decided on a statue of Monash, on horseback, but Russell Grimwade, had a more innovative idea, as he wrote who in Victoria, resident or visitor, could pass along the Prince's Highway between Melbourne and Yallourn without being arrested and thrilled by a Monash column set on a suitable hill, say, near Berwick, and without being brought to an understanding of the benefits he has brought to this fair State? Russell Grimwade was a businessman and a partner in the firm Felton Grimwade. This firm was started by his father, Frederick Grimwade (5) and Alfred Felton (6).  They were manufacturers of drugs and later branched out into glass works and chemical works. Felton, is the 'Felton Bequest' person. He left a generous sum of money in trust, half of which was to support charities and the rest to be spent on works of art for the National Gallery.

Mr Grimwade's idea was supported by the artist, Daryl Lindsay (7) who said, inter alia, imagine a hilltop clearly visible from the Prince's Highway, carrying a memorial such as the Nelson Column in Trafalgar Square, built up on a simple base and topped by a dignified and symbolic figure of Monash against the skyline, surveying the vast tracts of country so materially assisted by him towards prosperity. Daryl Lindsay was an artist and the husband of Joan Lindsay (8), perhaps best known for her book, Picnic at Hanging Rock.

The Monash Memorial was not built at Berwick, it was built in Kings Domain and as Daryl Lindsay said the Committee ended up deciding on an irrevocable plunge into mediocrity.  General Sir John Monash is remembered with Monash University and the Monash Freeway. 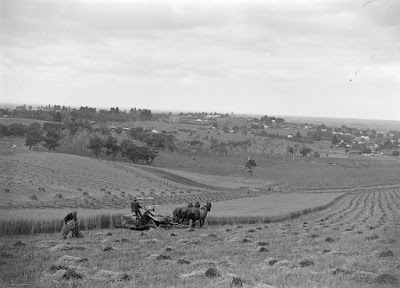 From a hill, looking south to Berwick.
Would this have been a suitable site for the Monash Memorial?
This is the link to the photo at the SLV http://handle.slv.vic.gov.au/10381/451960 if you want a good copy so you an zoom in and see all the details.
Harvesting, Berwick, c. 1945-1954. Victorian Railways photographer.
State Library of Victoria Image H91.50/2193

Russell Grimwade's article from The Herald of January 26, 1928 is reproduced below, or read it on Trove, here.

Monash Memory: a column set upon a hill - tribute to creative genius by Russell Grimwade.
The Monash Memorial Committee is confronted with a problem that has many solutions and one right one. The task is to perpetuate the memory of a rare citizen, whose gifts and abilities benefited his country in various ways. The choice of the particular benefit that is to serve as the theme of the memorial is narrowed by the early decision of the committee to make the memorial a State movement and not a Federal one.

His Gift To Australia
Surely that debars his military achievements from being the underlying theme for the monument now being conceived. His military talent was a gift to the whole of Australia, and is eternally recorded in the history of the Commonwealth in a manner of endurance that stone and bronze cannot surpass. According to the expressions of his friends, his success in war was accidental to his trained scientific thinking and his educated vocation of construction. Ethically-minded persons may consider it a needless perversion of right to choose a theme of destruction for a man of constructive mind when a unique opportunity for the latter is at hand.

A Great Opportunity
The choice of memorial is to be appropriate to the thoughts and acts of the hero. It is also desirable that it should reflect credit for all time on the discernment of its executors. The apparent predilection of the committee for an equestrian statue close to the Shrine is alarming in its orthodoxy, its commonplaceness and its failure to grasp the opportunity of recording in an original manner the constructive genius which our hero represents. Further, it does not strictly comply with the decision that this memorial should mark the appreciation of the people of Victoria of one of their outstanding sons.

Suez Canal Example
The world is dotted with equestrian statues of crusaders, monarchs and generals - crowded in their squares or palace yards, in different garb, but apparently on the same horse - until the passing stream of humanity accepts them with the apathy accorded to the lampposts or the fountains that support them. But who passes through the Suez Canal without thrilling to the welcome of Dr. Lesseps (9) and grasping his invitation to make use of his great work, and that without reading the lettering on the base?
And who in Victoria, resident or visitor, could pass along the Prince's Highway between Melbourne and Yallourn without being arrested and thrilled by a Monash column set on a suitable hill, say, near Berwick, and without being brought to an understanding of the benefits he has brought to this fair State?

The Master Brain
Sir John Monash may not have conceived the brown coal scheme. That may be to the credit of modest men who prefer to have others ask why a statue was not put up to them rather than why it was. But Sir John Monash's was the brain that carried the conception into effect against untold difficulties, that mastered them by choosing the men to master them, so that for all time the citizens of Victoria can live happier, cleaner, and less arduous lives.
Is it not easy to envisage such a monument in a commanding position in the most verdant part of our most verdant State, standing, away from the urbanities of our city and forming a focus of thought and attention that our young countryside so sorely lacks? Picture a chosen hill somewhere on the line of transmission wires about midway between his city and his great works crowned by a column with the figure of our hero in proper posture, surveying for all time the flow of material comfort to his fellow citizens.

The Contrast
Contrast this with the impossibility, of raising an equestrian statue above the standard of many that already exist, and picture it set beside the stupefying mass of masonry that is the Shrine, and then consider which would better perpetuate the memory of a great citizen. 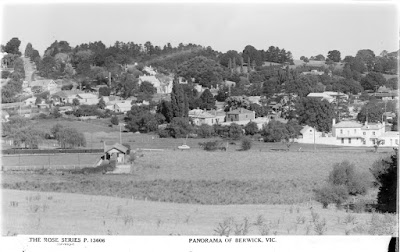 
This is Daryl Lindsay's letter published in The Herald, on January 28, 1932, read it on Trove, here.

Letter to the Editor - Monash Memorial: Mr Daryl Lindsay's Views
Sir, - Mr Russell Grimwade's thoughtful article on the proposed Monash memorial should stir the imagination of all thinking people in this State. His unconventional suggestion to place a memorial column at Berwick, or some other conspicuous point between Melbourne and Yallourn, is full of significance.

The idea contains an clement of greatness, lifting it right away from the usual commonplace conception of the corporate mind. Public committees, however well-intentioned, are not usually blessed with Mr Grimwade's ability to visualise exactly what the memorial is going to mean to Victoria in the future. The aesthetic value of an equestrian statue, even of artistic merit, would be automatically negatived by the clumsy bulk of the Shrine in close proximity.

In a few years the inconspicuous horseman would go to join the ranks or Melbourne's forgotten statuary. Imagine a hilltop clearly visible from the Prince's Highway, carrying a memorial such as the Nelson Column in Trafalgar Square, built up on a simple base and topped by a dignified and symbolic figure of Monash against the skyline, surveying the vast tracts of country so materially assisted by him towards prosperity - such a landmark would be noticed and inquired into by every passer-by.

Apart from any personal bias in favor of a civil rather than a military memorial, I feel very strongly as an artist the need to decentralise such public work of art as we possess. In Europe one is continually charmed by the variety of silhouette - a ruined castle, a statue, or a village spire breaking the monotony of nature's outline unrelieved by man.

Australian landscape is sadly lacking in such points of interest. Let us at least consider the suitability and beauty of Mr Grimwade's conception before deciding on an irrevocable plunge into mediocrity.
Yours, etc...
Daryl Lindsay, Frankston, Jan 27.